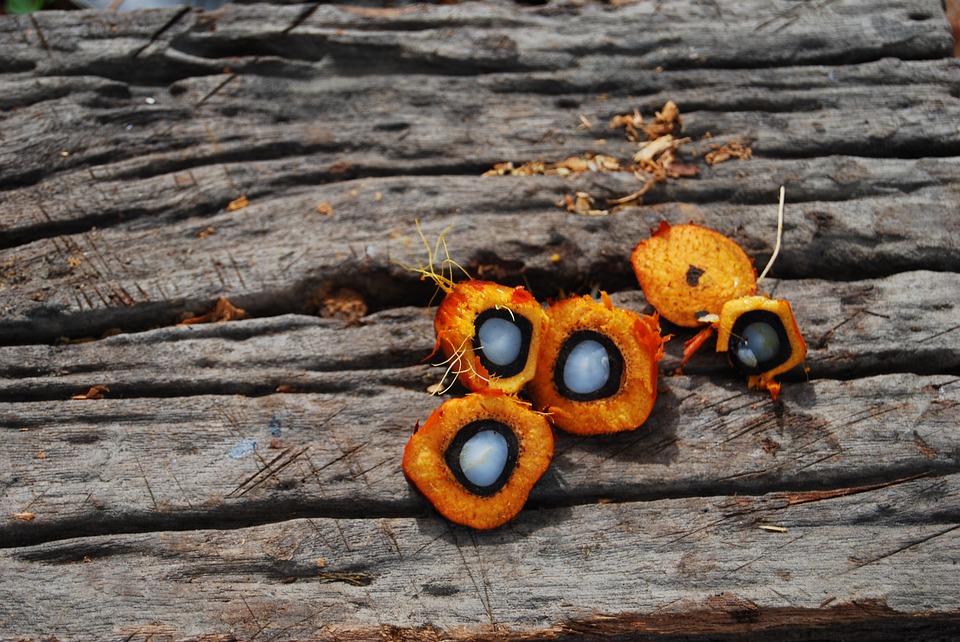 Banning palm oil may do more harm than good by diverting its sale to markets with fewer environmental checks and balances, says Reading environmental economist Professor Elizabeth Robinson, in a new post co-authored for The Conversation. Instead, she writes, supporting sustainable palm oil grown on degraded land might help save tropical forests.

Anyone lucky enough to visit Ghana could do worse than order a plate of boiled yam and red-red – a stew made with beans and tomato paste. A Sunday morning treat in Europe might be homemade crepes and hazelnut chocolate spread. Both of these meals – though part of very different cuisines and eaten in different places – contain palm oil, an edible vegetable oil extracted from the fruit of the oil palm (Elaeis guineensis).

The link between palm oil production and deforestation in the tropical regions where it is grown is well known, but few people realise how prevalent palm oil is in items consumed every day, such as cleaning products and biodiesel.

Global production of palm oil has increased rapidly since the 1990s, with plantations in Indonesia and Malaysia supplying around 85% of the global trade.

Many of these plantations have replaced natural forests and drained carbon-rich peatlands. In Indonesia alone, palm oil is cultivated by more than 4 million smallholder farmers, employing more than 7 million labourers throughout its supply chain, and in 2017 exports contributed over USD$23 billion to the country’s economy.

The European Parliament issued a resolution in 2017 to phase out and eventually ban biofuels made from palm oil. The EU ban could reduce demand for palm oil, but many, including the International Union for the Conservation of Nature, aren’t sure it will be effective in stemming deforestation. Malaysian farmers meanwhile argue it will harm their livelihoods..

The ban could even harm the environment by ending efforts to work with countries that are developing sustainable palm oil production that can also reduce poverty.

Just under half of the EU’s palm oil imports are used for biodiesel. Despite the importance of palm oil to Indonesia’s economy, the impact of an EU ban is likely to be small. Indonesia exports two thirds of its biodiesel production, but only around one fifth of that goes to EU countries.

Indonesia may compensate for lost sales in the EU by increasing sales to large importers such as India and China. The EU ban could set back Indonesia’s efforts to manage its forests and palm oil trade more sustainably as these customers aren’t currently committed to sustainable sourcing. Unintended consequences like these highlight why bans can be crude policy instruments.

The EU ruled that renewable fuels such as biodiesel must comprise 10% of transport fuel by 2020. This was intended as an implicit ban on fossil fuels comprising the final 10% of vehicle diesel, but banning particular crops like palm oil for biofuels and keeping a biofuel requirement simply diverts the problem. This is particularly so if the EU continues to meet the 10% requirement using “first generation” biofuels – those derived directly from food crops, such as soy or rapeseed.

Better approaches would target the interconnected problems of carbon emissions, deforestation and poverty. EU countries could support the sustainable cultivation of palm oil, breaking the link between oil palm expansion and deforestation in producer countries. One way to do this is planting on degraded land rather than replacing forest. This avoids the negative impact of a ban on the livelihoods of millions of farmers.

Demand for fossil fuels could be reduced more effectively by making public transport more accessible, affordable and reliable. Incentives for people to buy electric cars, through subsidy and a higher density of charging points, could also help.

Indonesia and the EU have already worked together on this issue with some success. A voluntary partnership agreement between the two in 2003 helped Indonesia reduce illegal logging and export timber to the EU. But given that most of Indonesia’s palm oil exports go to countries outside of the EU, a global approach is needed.

The UN Environment World Conservation Monitoring Centre investigates the sustainable trade in forest products. It hopes to understand how incentives for supplier and producer countries can ensure trade improves livelihoods, prosperity and the natural environment.

In an increasingly interconnected world, seemingly sensible decisions made in one place can have unintended consequences elsewhere. An EU palm oil ban, designed to protect tropical forests, could instead harm the livelihoods of farmers and increase forest loss if countries such as Indonesia and Malaysia switch to markets with fewer environmental checks and balances.

This post first appeared on The Conversation, 3 May 2019. It was co-authored by Herry Purnomo, Professor of Forest Management and Governance, Centre for International Forestry Research. This article was amended on May 9 2019 to make clearer that an EU ban has not yet been enacted.

Elizabeth Robinson is Professor of Environmental Economics at the University of Reading, specialising in the management of natural resources in low and middle income countries. She coordinates the working group on exposure and vulnerability of people to climate change for the Lancet Countdown, which tracks the connections between public health and climate change. She is also a member of the Lancet Countdown board.