Over the last decade, the number of people drinking cow’s milk has dropped – with people swapping dairy for plant-based alternatives, such as oat and almond milk. With new types of plant-based milks seemingly emerging every week, this trend is unlikely to stop any time soon. 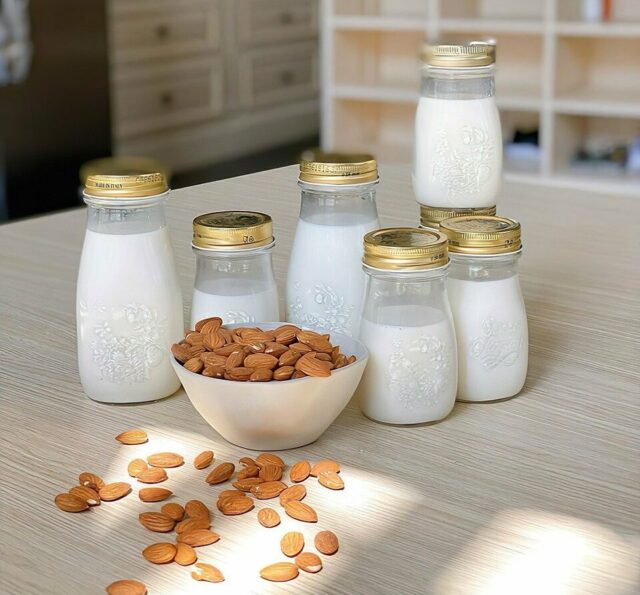 There are a number of reasons why people are making the switch from dairy to plant-based alternatives. For one, many people aren’t able to consume dairy. Not only are around 5% of UK adults lactose intolerant, dairy is also the most common allergen in early childhood.

But despite being marketed as alternatives to dairy, plant-based products may not be exactly the same as dairy. So if you’re thinking of making the switch, here are a few things to be aware of.

Cow’s milk is a rich source of many important nutrients, such as protein, calcium, iodine and vitamin B12. But many plant-based dairy alternatives don’t naturally contain the same amount of these nutrients and micronutrients as dairy milk – if any at all.

On average, most plant-based alternatives contain almost no protein – while one glass of cow’s milk containing around eight grams of protein. Soya milk is the exception, containing a similar amount of protein per glass as dairy.

Protein is essential for healthy growth and development. While everyone needs protein, some groups may need more than others. For example, older adults need it to maintain muscle strength with ageing and children require it for growth.

On average, most UK adults get around 15% of their protein intake from dairy products. But if plant-based dairy alternatives are used as like-for-like replacements, this number could be less than 1.8%. So if you do make the switch to plant-based dairy products, soya milk may be your best bet for getting protein. If you use other types of plant-based milk alternatives, it will be important to include other high-protein foods in your diet, such as tofu or eggs, to make sure you’re getting enough.

Most plant-based dairy alternatives also don’t naturally contain the same vitamins and minerals that dairy does. As such, many need to have these added during the manufacturing process, which is called “fortification”. It’s worth noting, however, that any plant-based dairy alternatives labelled “organic” will not contain any fortified vitamins and minerals as this would go against regulations.

Calcium is a very important micronutrient found in milk. It’s needed for good bone health, particularly in children and adolescents. But my own research has shown that only 57% of milk alternatives, 63% of yogurt alternatives and 28% of cheese alternatives are fortified with calcium. So to ensure you’re getting enough in your diet, check the label and look for products that have been fortified with calcium. Or, focus on eating foods that contain calcium – such as fortified breads and cereals or tinned sardines or salmon.

Iodine is another important nutrient, especially for pregnant women and young children as it’s important for brain development. It also helps make thyroid hormones, which are important for both growth and metabolism. Despite milk and dairy products being the main source of dietary iodine, only a small handful of plant-based dairy products are fortified with iodine. Again, it’s important to read the product’s label to see if it’s been fortified with iodine or not. Otherwise, focus on eating foods that contain iodine, such as fish, shellfish or seaweed – or if this is not possible by taking a supplement.

Also look out for vitamin B12 in any plant-based dairy alternatives you may buy. This vitamin is essential for the brain, nerves and blood cells. While some plant-based dairy alternatives contain vitamin B12, most don’t, so you’ll need to focus on getting vitamin B12 from other food sources. Meat typically contains the highest levels of vitamin B12, but if you follow a vegetarian or vegan diet you may need to consume yeast extract, fortified breakfast cereals or supplements to make sure you’re getting enough.

Plant-based dairy alternatives aren’t cheap – costing almost three times the price of cow’s milk and other dairy products (such as yoghurt). For a family of two adults and one child, the cost of consuming dairy products is around £310.89 a year – while plant-based alternatives may cost closer to £856.70 a year. Purchasing own-brand products which are fortified may be a cheaper way to avoid dairy while sticking to a budget.

But of course, there are many reasons why a person may need to switch to plant-based dairy alternatives – whether that’s due to allergies or environmental concerns. If you’re worried about you or your child getting enough vitamins and minerals in your diet after making the switch to plant-based alternatives, it’s worth consulting with a registered dietitian or doctor. Plant-based milks are generally not recommended for children under two years. After that, fortified soya milk is likely the best alternative as it will contain important vitamins and minerals, as well as high amounts of protein.

If you prefer other plant-based milk alternatives, look for one that’s fortified. Avoid rice drinks if you have children under the age of five as they may contain high levels of arsenic. But thanks to increasing interest in plant-based diets, there’s now a wealth of choice when it comes to plant-based dairy alternatives – just make sure you read the label before buying one.