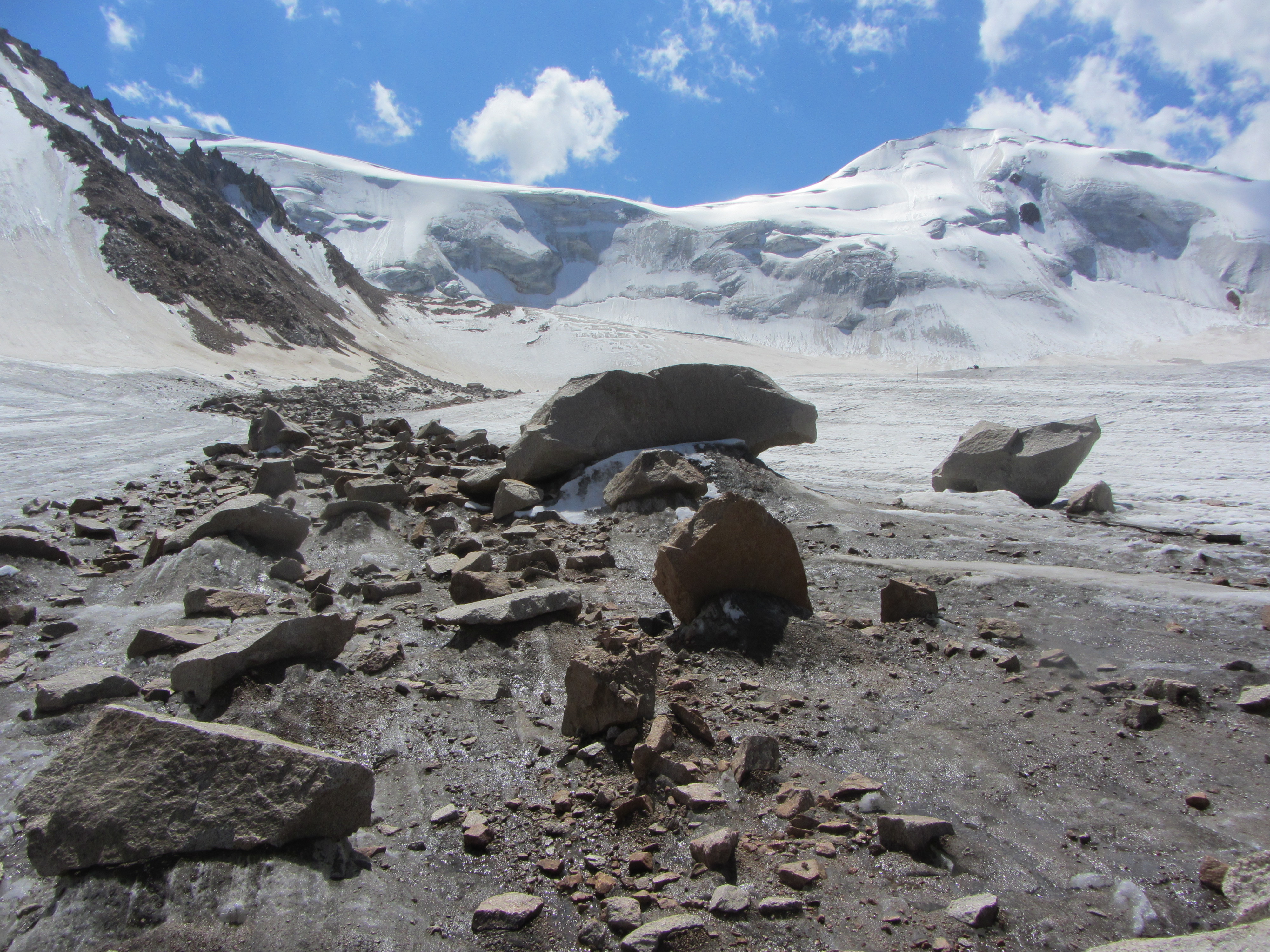 Professor Maria Shaghedenova’s research looks at the shrinkage of glaciers due to climate change, and the effect of this on rivers and lakes. Her work recently featured in a  visually stunning interactive New York Times piece about melting glaciers in Kazakhstan. Here she tells us about the University of Reading science behind the story.

The New York Times story originates from our research project Climate Change, Water Resources and Food Security in Kazakhstan which was funded in 2015-17 by the Newton – al Farabi Fund. Our main collaborators were the Department of Glaciology at the Kazakhstan Institute of Geography (KIG) led by Professor Igor Severskiy.

We started collaborating with KIG, which runs several high-elevation meteorological-glaciological stations, in 2009. The most important of these stations is the Tuyuksu Mountain Observatory, at 3438 metres above sea level, established during the Soviet Era in 1957/58 ( the First International Geophysical Year) at the tongue of the Tuyuksu glacier.

Tuyuksu is one of the world’s reference glaciers  – that is, one of a network of glaciers which are regularly measured coordinated by the World Glacier Monitoring Service. The station is particularly significant because it has such a long record, and the KIG managed to keep it going after the collapse of the Soviet Union, when most monitoring facilities in Central Asia were closed.

In our project, we documented glacier change in the region in terms of its area (a decline of 1% per year since the 1950s), volume and mass balance. We assessed changes in climate using historical data from high-altitude stations and we put together an archive of water discharge data from the region. Data from several natural catchments were analysed for trends.

Our main conclusion was there had been no negative trends in discharge since the 1950s, but some increase since the 1970s, which is when most observations start.

As part of our research we ran regional climate models for Intergovernmental Panel on Climate Change reports to generate future climate scenarios and used a hydrological model to simulate future changes in discharge from the glacier. Our main conclusion was that peak flow has already been reached and will continue until the 2040s. We expect to see a decline in water discharge from the glacier in the summers afterwards.

We also collaborated with local farmers to gather data on crop production and water use for irrigation. We found the irrigation system to be in a very poor state with inefficient use of water.

The local Kazakhstan administration often says that there is no water due to climate change, so they were quite surprised when we said that currently, there is more of it than there used to be! Crop models have been set up to assess how the lack of water may affect crops in the future.

Maria is a climate scientist in the University of Reading’s Department of Geography and Environmental Sciences. She is involved in two Global Challenges Research Fund projects; the first on the impact of climate change and glacier retreat on water quality and the second on analysis of the sources of water in the glacial discharge (i.e. the proportions of snow, glacier ice, rain and permafrost.)

Maria also leads a Newton Fund project looking at formation of glacier lakes and their hazard potential. The research team have calculated where across Central Asia glacial lakes might form following glacier retreat in partnership with the Kazakh State Agency for Mudflow Protection. On the basis of the team’s results, the agency surveyed a large number of glacial lakes in summer 2018 and lowered the levels of several of them using controlled explosions to partially drain the lake.