By Christian Pfrang, Department of Chemistry, University of Reading 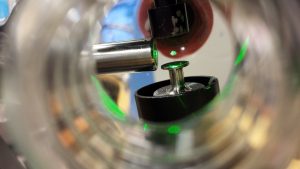 These types of aerosols are typical of pollution emitted in large quantities by cooking processes in Greater London. This self-assembly is caused by molecules –such as fatty acids– containing both water-loving and water-hating parts.  While the general concept of self-assembly is well-known and surface films of these molecules have been studied before, complex three-dimensional arrangements inside water-based droplets found in the atmosphere have not previously been considered.

In our experiments we held single droplets in levitation and followed changes in these droplets at the same time using X-rays to track the arrangement of the molecules and Raman spectroscopy to follow chemical changes. We exposed these droplets to conditions encountered in the atmosphere: changes in humidity and presence of the atmospheric oxidant ozone.

In all humidities, our droplets exhibited highly complex self-assembled three-dimensional structures.  Exposure to ozone eventually broke down the molecules and destroyed the complex molecular arrangement, however, the molecules survived much longer in those arrangements than expected.  This could explain longer lifetimes of such molecules found in the atmosphere compared to laboratory experiments where the complex arrangements that may be encountered in atmospheric conditions is not taken into account.

While it is clear that further studies are urgently needed to test the impact of this complex self-assembly on the atmosphere, our work demonstrates the potential of these arrangements to explain substantially extended atmospheric lifetimes found for reactive organic molecules. Further investigations combining laboratory and field studies are required to establish the influence of complex three-dimensional self-assembly on a wide range of properties key to atmospheric aerosols and climate change.

This research is a collaboration between Universities of Reading, Bath, Bristol and Lund with experiments carried out mainly at large-scale facilities in Sweden (MAX-lab) and the UK (Diamond Light Source).