Dr Karen Dempsey’s research tells the stories of medieval people’s lives through the objects they used and cared about, in the spaces where they lived and worked. Here she tells us some unexpected facts about daily life in medieval castles.

1. Not many people lived there for much of the time.

While castles were homes, they weren’t permanent residences – the lord, lady and household moved from castle to castle and took their things with them – beds, linen, tableware, tapestries, candlesticks, chests and perhaps even plants in pots! This means that the resident household at a castle would usually be very small and most of the rooms were shut up. 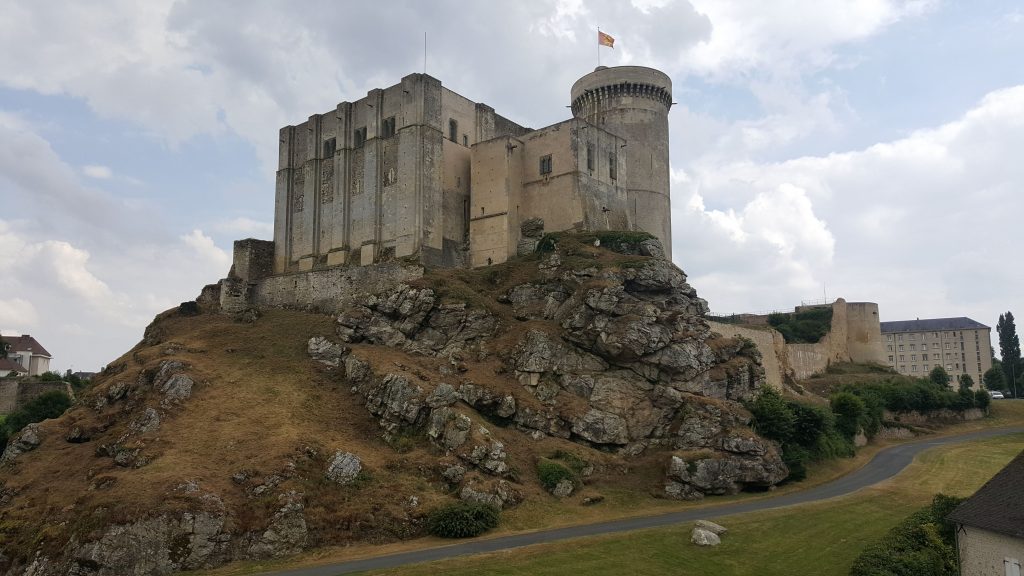 The moving household could be anywhere from 30 to 150 people; it would have included the lord and lady as well as their children (which could go into double figures – for example Queen of England Eleanor of Aquitaine had 10 children). Then there would be people associated with the different areas of the household from the kitchen, stables, guards, carers for the children, personal attendants to the lord and lady and those who carried out religious duties.

The time of year was also important. Numbers in the household could swell at times of celebration such as Easter, or when they received guests, who might stay for months at a time. At other times, the household might be smaller such as during a woman’s confinement before birth and just after (see Rachel Delman’s work on this).

2. Toilets weren’t as dirty and smelly as you’d think.

Castle toilets, also known as garderobes or latrines, would have a plank of wood with a hole held on stone supports through which waste could be deposited.

These latrines were usually found in the colder northern walls on the first floor of castles, mostly at a corner edge as far away from the main entrance as possible – but not always. Sometimes they are contained within the built fabric of the castle, visible as either latrine chutes or as slightly overhanging features held on corbels or beams of wood that once protruded from the wall.

Waste dropped directly out from underneath the latrine, through a cavity, down the wall and onto the ground, there for all to see (read about some Irish examples for more detail)

Other types – the chutes held in the wall – channelled the waste down to the base of the building in a more discreet fashion.

While medieval people didn’t practise the same degree of hygiene that we do, they were relatively clean. There was particular way in which to ‘clean up’ oneself, rubbish had a designated place, floors were swept or kept free from too much debris, and rushes or floor coverings were used especially if they were not tiled or flagged.

3. Medieval women living in castles didn’t just sit around gazing out of windows.

Feminism as it currently exists today was not present in the medieval period. What we can talk about is female agency. In other words how women acted within the constraints of a patriarchal society either as individuals or as a group.

Potential acts of subversion can be seen in a number of ways. Women could not participate fully in the church – for example they were forbidden to touch the altar. However, many women donated their clothes, or made personalised altar clothes for the church or priests. This meant that clothes that had touched them, that they had owned, made or worn, eventually came to be worn by clergymen or used to wrap the altar – one of the most sacred parts of the church.  Fiona Griffiths and Katherine French have done some excellent work on this.

While we cannot say that this was a feminist act it was certainly a way of cleverly avoiding the ban on touching (even if by proxy!)

Another, perhaps more obvious way, was that many women who were married once and became widows chose to stay that way. They elected not to remarry.

Widows had a special place in society – they almost operated as men, especially in relation to property and wealth. 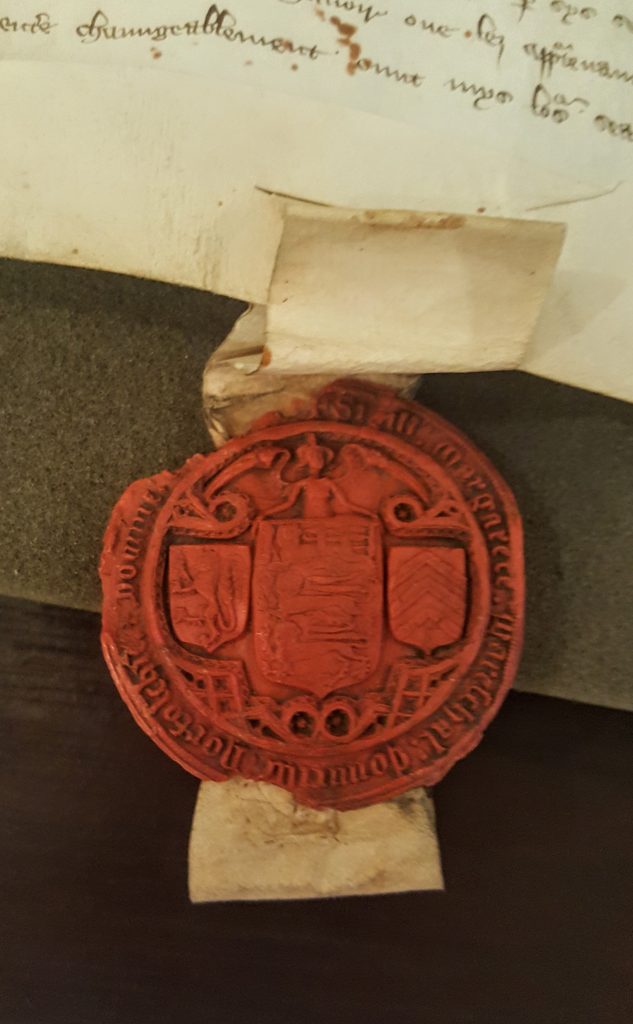 Medieval noblewomen had a similar level of power to the lords in the household. The security of the lordship came from the united married couple who produced hiers. She would be seen as the head of the household – with the power to enforce it (like the amazing Joan de Valence; a recent book by Linda Mitchell gives a wonderful picture of her life).

Lords often spent a great deal of time away from their castles. They could be on crusade, attending court, at another castle – or dead. During these times it was up to the lady to do the paperwork to run the estate, sealing official documents (as you can see on this seal of Margaret Mareschall, Countess of Northfolch) or to defend the castle in the rare case of attack. But, more research needs to be done on women’s daily life in the castle.

Castles are always depicted as dark and cold and some probably were. But, in reality, the great hall of castle had a large open hearth to provide heat and light (at least until the late 12th century) and later it had wall fireplace. The hall would also have had tapestries which would have insulated the room against too much cold.

In the chamber – the more private rooms of the castle – there were beds with curtains, giving an extra layer of warmth, and these rooms largely had fireplaces. When there were no fireplaces rooms were heated with moveable fire stands.

Castles have little square apertures in the walls called lamp rests where one could place a candle or lamp throwing out warm light. And further up the social hierarchy one had better, clean-burning candles that smelled more like beeswax that animal fat.

A book by Audrey Thorstad will shortly be published that talks about rooms for servants above the kitchen. These spaces would seem small to us today (and lacking in privacy) but we can imagine that being above the kitchen was warm, and I would like to think smelled good – of warm bread and roasting meat.

5. Bedrooms were not the private spaces we know today.

Medieval ideas of privacy were not the same as ours. There were degrees of private and public. So privacy in your bedchamber could involve a number of people!

Beds had canopies, often emblazoned with coats of arms or other heraldic images / biblical scenes. They were not just for sleeping; they often doubled as a seating area when entertaining special guests in the relative privacy of the chamber (this is not a euphemism). A new book by Holly Morgan reveals more.

Privacy became more pronounced and there was greater emphasis placed on the chamber. We have many images of bedchambers and chambers from manuscripts.

The oldest surviving beds in England date from the 15th century but we do know earlier forms from manuscripts (visual) or written sources. The higher up the social scale the more elaborate the bed; the poorest slept on straw.

6. Children were as loved and valued by medieval people as they are today.

Children of elites spent time at court and were often educated away from home. Many elite women had wet-nurses – other women, often lower down the social scale, who breastfed their babies for them. This may or may not have affected their bond.

But while the social norms involving children were different in medieval times, this should not be misunderstood as a lack of love for children.

We have much evidence for children’s games and toys – smalls token found in excavation and small tin birds with moving parts were found in medieval London. There are miniature items of furniture and so on which are widely believed to have been given to children to educate them about society and their expected roles. Reading’s Professor Roberta Gilchrist has written about this in her 2012 book, Medieval Life.

Here is a particularly loving image of a family scene called the ‘Holy Family at Work’ from the prayer book of Catherine of Cleves ca. 1440: 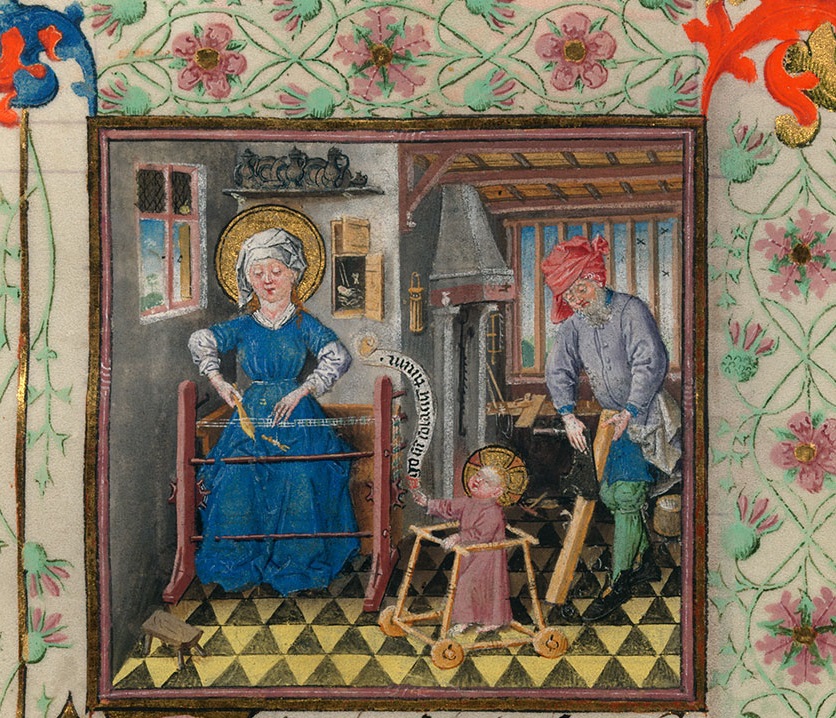 Children were treated differently in burial practices. They were clustered in particular parts of cemeteries close to the western region of churches. Special attention was paid to mortuary rites around children which suggest a great deal of care.

Direct archaeological evidence for menstruation is limited likely owing to the material used – probably textiles. These don’t tend to survive that well in the archaeological record. However, there is lots of material that relates to coping with period pain or female gynaecological health.

One of the things that made menstruation more difficult was the social taboos around menstrual blood. Historians such as Chris Woolgar note how clerics believed that even looking at a menstruating woman could poison babies.

We know that many plants – often found in the archaeological record as seeds and still present in the modern landscape of castles – were used as drugs to treat pain. Some have an association with women in folk medicine. Some rare medicinal plants such as Henbane (Hyoscyamus niger) and wild sage (Salvia verbenaca) are both found at Rhuddlan Castle, the earliest Edwardian castle in Wales with historical evidence for royal gardens.

Henbane has an accepted pharmacological use as a sedative. Folkloric accounts range from its use as a painkiller in childbirth to cures for cancer. Many other known medicinal plants such as white dead-nettle (Lamium album) at Flint Castle and wild rocket (Diplotaxis tenufolia) which was only found on the walls of Harlech Castle were noted in Trotula’s Treatments for Women:

“Some women…have a sanious flux…with the menses. Such women we make to sit upon a mass of wild rocket cooked in wine, a linen cloth having been interposed while it is still warm.” (Green, 2002)

Dr Karen Dempsey is an archaeologist who specialises in medieval castles, with a particular interest in the lives of medieval women. Her Marie Skłodowska-Curie Fellowship, HERSTORY, challenges the notion that the medieval past was a ‘man’s world’ by telling a story of medieval people’s lives through the things (objects) they used and cared about in the spaces (castles) that they lived or worked.