On a rainy June morning in the summer of 1948 a British troopship, itself requisitioned from the German navy during the Second World War, arrived at Tilbury docks in Essex, carrying a number of Polish ex-soldiers, some Jamaican pilots who had fought the RAF returning to duty after a period of rest in their home country, and a number of other passengers. There was nothing remarkable about this in of itself – the war has led to men and women in the various combatant armed forces being scattered across the globe, and ships like the HMT Empire Windrush were busy transporting them from one country to another. But the reception awaiting the Windrush, and the panic it had caused in Whitehall while it was still in the mid-Atlantic, was. 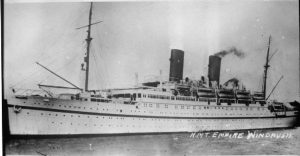 Curious crowds were there at Tilbury, along with film crews. Meanwhile, the Home Office, the Foreign Office, and the Ministry of Labour were attempting to pass both blame and responsibility for the passengers disembarking onto the dockside to each other. The interest, and the anxiety, was occasioned by those passengers who were neither Polish volunteers or Jamaican airmen. These were several hundred economic migrants from the Caribbean, there to start a new life in Britain.

‘Windrush’ has come to take on a number of meanings in the discourse on post-war Black British history. Firstly, there is the ship itself, its initial reception, the contemporary media coverage, and what happened to the thousand passengers who arrived in Essex on June 21 1948. But more broadly, ‘Windrush’ has become a shorthand for the Caribbean experience in Britain up to the 1960s, the hopes, the disappointments and the struggles of the men, women and children who made that journey, and the period of time between the British Nationality Act of 1948 and the Commonwealth Immigration Act of 1962.[1] ‘Windrush’, with its evocation of ocean spray, difficult travel, dangerous tempest and exhilaration, became imbued with positive associations, and it is no surprise that one of the pioneering television documentary series on the history of modern Caribbean settlement in Britain took the name of the transport ship for its title.[2]

But during the last two and a half years, ‘Windrush’ as a term has acquired a new meaning, bound up with suffering, callousness, borderline governmental illegality, exile and dislocation. Here ‘Windrush’ is juxtaposed with the term ‘scandal’. This is the forced removal of large numbers of people of Caribbean heritage from Britain by the State, sometimes acting outside the law, and the prevention of Black people who had made short journeys from Britain to the Caribbean from returning home to the United Kingdom.[3] However, the Windrush scandal of recent times is only the latest manifestation of a belief and a policy that Black people should be removed from Britain, should be forced to ‘go home’, and that that ‘home’ is by definition somewhere else, whether they had been born in Britain, or had spent decades living and working in that country. And this discourse of repatriation has a history stretching back decades, indeed centuries. This discourse is not based around place of birth, but rather the belief that certain groups are inherently ‘foreign’, outsiders, and will always be sojourners.

Black British history does not of course start in 1948, and neither did the discourse of repatriation. At the end of the eighteenth century, London and Bristol both had significant populations of African heritage, at every class strata of society, from aristocracy to underclass. Britain’s Black communities were joined at the end of the American Revolution by several thousand African-American former slaves who had fought on the British side during the war of independence. That Black people in Britain, in particular London, should be relocated to a more ‘suitable’ location was already being suggested at the beginning of the nineteenth century, although the intended destination varied in this polemic.[4]

During the First World War hundreds of thousands of men and women from across the Caribbean, the African continent and South Asia, fought in the British army in multiple theatres of the conflict, sailed on British ships, and took part in the economic war effort. Rather than celebrating this, as soon as the war had concluded campaigns were initiated demanding that all Black and Asian soldiers, sailors and workers in Britain be speedily repatriated. The culmination of this, in the summer of 1919, was some of the worst ethnically-motivated violence witnessed in Britain in the twentieth century, with gangs attacking Caribbean, African, South Asian and Arab communities across the country. This led to hundreds of injuries and a number of deaths. Magistrates notoriously punished those who had been attacked and had resisted this violence with heavier sentences than the attackers themselves. The state responded by deporting or encouraging the repatriation of thousands of Black and Asian British citizens. In response, on June 14 1919, the Society of People of African Origin held a rally in Hyde Park, declaring their solidarity with those who had been removed from Britain, and resistance to the racist policies of the British government.[5]

Repatriation discourse gathered pace after the Windrush disembarked at Tilbury. Indeed, even before the migrants arrived, Whitehall was debating how to get them to return to the Caribbean. From the end of the 1950s demands for forcible removal of Black and Asian people increasingly became associated with the rhetoric of the far-right, but it continued to permeate the consciousness of the political mainstream. This became apparent in the aftermath of the Notting Hill unrest of 1958, when various fascist figures, including Oswald Mosley, leader of the British Union of Fascists in the 1930s, descended on the area attempting to make political capital out of the situation. Forced repatriation became one of the key policies of the neo-fascist National Front from the late-1960s onwards, and was carried partially into the centre of British politics by the Conservative politician Enoch Powell, who advocated mass removal of Black and Asian communities over the course of the 1970s and into the 1980s.[6] Post-war governments, both Conservative and Labour, at times attempted to pander to this sentiment, especially when General Elections were looming. As in 1919, minority communities actively resisted both fascist incursions and official prejudice. The language of forced removal did not fade away in the 1990s and 2000s, although the term ‘repatriation’ was not used as much in political discourse as it had been in the 1970s. The Windrush scandal of the twenty-first century has proved, if proof was needed, that the rhetoric and the policy of forced removal have not been consigned to the past, but remain with us today, influencing policy and perceptions.

[1] Kennetta Hammond Perry, London is the Place for Me: Black Britons, Citizenship and the Politics of Race, New York: Oxford University Press, 2015.

[2] ‘Windrush’ was first broadcast as a four part series on BBC2 on the fiftieth anniversary of the Windrush arriving at Tilbury.

Daniel Renshaw is a lecturer in the Department of History.