Professor Peter Kruschwitz, from the Department of Classics at the University of Reading, is a Latin scholar with a long-established specialism in Latin inscriptions. One of his current projects aims to collect, edit, translate, and explain the Latin inscriptions, ancient, mediaeval, and modern, from Reading. The Latin term monumentum, from which the English ‘monument’ is derived, is related to the verb monere, ‘to remind’. Monuments are thus tangible, visible manifestations of human memory. Often monuments are inscribed, to aid the memory of those who want to remember, and that of future generations, as to why a certain monument was erected – be it specific to a person, an event, or gnomic, i. e. in the form of some general wisdom. Monuments and inscriptions form a unit that cannot be dissolved, and it is the conjunction of the two that makes for a particularly powerful tool. But what if the language of the inscription cannot be understood by (most or at least some) of the public that it addresses? What happens if neglect allows the monument itself to decay? One could argue that in those cases memory will fade with the monument itself, and neglect will turn into ignorance. The Latin inscriptions from Reading, whether ancient, mediaeval, or modern, provide numerous telling examples for this view. Times are a-changin’ 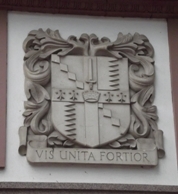 “A force united is stronger.”

Why exactly is this on display in Reading’s Broad Street? Older residents of Reading may remember that the building was not always that of HSBC, but was once the location of the Midland Bank. This bank was acquired by HSBC in 1992, and it was rebranded in 1999. The crest, with its freemasonic elements, and the Latin motto was that of the Midland Bank, originally founded in 1836.

It is beautifully ironic in a way that the Latin inscription and the crest alone survive, with a Latin motto that in hindsight seems to suggest that, even for banks, only joining forces is hope for survival.

After just twenty years, it has become difficult to understand the relationship between the Midland Bank motto and its current location. It may also be difficult or in fact impossible for many passers-by to grasp the meaning of the text, even though Latin mottos are, in fact, still frequent in Britain.

But what if the inscription is closer to 300 years old, substantially longer, yet exclusively written in Latin, and it is not even on display in a prominent spot? The answer should be obvious, and it is depressingly easy to illustrate the point with an example. The following stone now lies in the graveyard of Saint Laurence, just north of the church building. This is the monument of Edward Dalby, once upon a time the Recorder of Reading. It reads thus:

The stone, embellished with a significant coat of arms at its top, now exposed to weather, filth, and vegetation, records the life of one of Reading’s foremost dignitaries at the time as well as those of his family: Edward Dalby of the Inner Temple. Henry Hyde, Earl of Clarendon, described him as a man ‘of eminent loyalty and as wise a man as I have known of his rank’. He married Frances, daughter of Charles Holloway, also a lawyer. Dalby became Recorder (or High Steward) of Reading in 1669, replacing Daniel Blagrave, who had to flee the country for his involvement in regicide (as one of the signatories of King Charles I’s death warrant). Their daughter died young. Their son John, not mentioned in this text, continued the legacy of the Dalby family after his father’s death. Only a small street, Dalby Close in Hurst, Wokingham, still preserves the family’s name today.

There are well over 100 Latin inscriptions, from ancient to modern, in Reading – some of them well-known to everyone (like the one on the pedestal of the statue of Queen Victoria on Blagrave Street), others rather more cryptic and hidden away. Many of them have fascinating stories to tell, and they all add to the jigsaw puzzle that is the history of Reading. For the Latinist, they are also invaluable documents to understand the spread, role, and legacy of Latin in modern times. It is high time to collect these texts and to make them available to the public, in translation and with appropriate amounts of documentation, so that fading memory, in conjunction with a language barrier, will not soon turn into complete and utter oblivion.