Gare St. Lazare Ireland (GSLI) and The Samuel Beckett Centre at University of Reading teamed up to present a third How It Is Symposium on the 5 March 2021. The symposium, which took place entirely online, welcomed colleagues from around the world, including speakers from New Zealand, Spain, France, Mexico and the UK. The digital format of this symposium embraced the international reach of Samuel Beckett’s work with GSLI stating that “in some respects it is fitting that it is taking place, not at any one place, but in every place that can connect digitally. As we strive for a global participation, we have also worked to hear the voices of scholars, artists, writers and practitioners” (GSLI 2021). 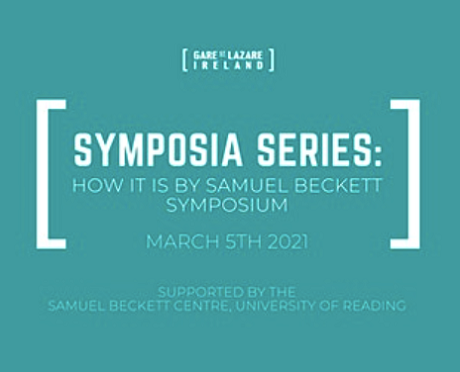 These symposia are organised to encourage discussion of Beckett’s How It Is and to make it known to a wider public. The novel, first published in French as Comment c’est in 1961, and later translated as How It Is published in 1964, seems to resists any simple description. With the absence of punctuation, the fragmentary text constructs a broken experience that has lost, or cast off, all markers of space, time, or context, and invites an engagement and physicality from its reader that few other books can. This physicality emerges in GSLI’s staged adaption of How It Is in three parts (2018, 2019, with the novel staged in its entirety scheduled for 2021), which was conceived during their three-year residency at the Everyman Theatre, Cork. This staging is “not a play”, but rather a novel staged in “its entirety”, as director Judy Hegarty-Lovett has stated in an interview with The Irish Times. GSLI’s research into How It Is was the impetus for this symposia series, which has now become an exciting annual event.

The symposium began with a fascinating morning keynote from Chris Ackerley titled ‘Annotating Comment c’est/How It Is: In Three Parts’. Ackerley’s paper detailed how Beckett wrote first in French (Molloy, Malone meurt, L’Innommable, Textes pour rien, Comment c’est) and then in English. The result of this being that the English texts are not a translation but works with their own integrity, that together with the French originals can truly be considered bilingual texts. The purposes of bilingual annotation then, Ackerley explains, is to give a “context of relevant meaning” that assists in the act of reading and interpretation. Ackerley, working with Llewellyn Brown, began a bilingual annotation of Textes pour Rien/Texts for Nothing which was published in 2019. The bilingual annotation of Comment c’est/How It Is is currently underway and is due to be completed later this year.

José Francisco Fernández’s paper on ‘How It Is/Cómo Es: Translating Beckett’s untranslatable novel’ was the first in the morning panel. Fernández’s described the physical intensity of the English text, especially in relation to the explicit discussion of sex that emerges out of Beckett’s mother tongue.  Fernández detailed the process of rendering this physicality in Spanish through the use of stronger verbs (specifically, this included verbs with repeated ‘r’ sounds) and avoiding neutral terms. This focus on physical intensity re-emerged throughout the next paper ‘Inscription as tattooing in How It Is’  as Akra Chattopadhyay discussed the act of tattooing as an “index of inhuman violence” and yet proposes that, “it stands for corporeal love”. Chattopadhyay also represented the primordial writing culture at the level of trans-generational communication in Beckett’s novel. Adrienne Janus’s paper prepared the attendees for GSLI’s ‘Work in Process Extract’ by discussing How It Is as text and dramatic performance in ‘Hear it is: Scenes of Listening and Sonic Atmospheres in How It Is’. Janus’s paper focuses on the perceptual experiences of listening readers and listening spectators in relation to atmosphere: “It is not a question of asking ‘who speaks’, from where, when, but following the experience Adorno referred to as “listening without localising,” asking how voices that, as material sound, as well as sense, affect us, envelope us and touch us, without being distinctly identifiable or graspable”.

After lunch, the symposium resumed with a pre-recorded ‘How It Is – Work In Progress Extract’ from GSLI, directed by Judy Hegarty Lovett, with camerawork by Seamus Dillane and Judy Hegarty Lovett. This stunning work in progress displayed actors Conor Lovett and Stephen Dillane in various states of isolation and confinement, staring out into the void, as they journeyed across the three parts of the novel with the watching audience enthralled: “good moments yes I assure you before Pim with Pim after Pim vast tracts of time good moments.”

Ulrika Maude presented the afternoon keynote ‘“In the Dark the Mud in Torment and Solitude”: Reading How It Is’ which discussed the influence of experimental psychology and behavioural conditioning, such as Ivan Pavlov, on the non-visible body, “the viscera – ‘the soft contents of the principle cavities of the body’ (OED), including the kidney, heart, brain, bowels, lungs, the nervous, endocrine and blood systems” – in Beckett’s texts. In this detailed and expansive keynote, Maude also explored the affective and embodied quality of the non-visible body with specific reference to How It Is, as opposed to the representation of the sensorimotor body which has been much written about in recent years.

With close textual analysis of How It Is and Lewis Carroll’s Alice in Wonderland and Through the Looking Glass, Sara Crangle’s paper ‘On ‘It’’ considered how the pronoun ‘it’ is used “to ask questions of the reader constantly” and to “interrogate our ideological assumptions” in the symposium’s afternoon panel. Particularly, Crangle discussed Beckett’s evasive response to reactionary politics and how this may enable an interpretation of How It Is as a satire of 1950s French governance and law.

The final paper of the symposium was Luz María Sánchez Cardona’s ‘Technological and Physical Space: An Exploration Through Text and Sound’ which detailed adaptions of Beckett’s work, such as Sarah Kenderline and Jeffrey Shaw’s virtual reality UNMAKEABLELOVE that is based on Beckett’s The Lost Ones. Sánchez Cardona, a transdisciplinary artist, writer and scholar, shared ‘Closed Circuit’, a mesmerising audio of a female voice detailing an autopsy, that has been influenced by How It Is. This piece is an immersive sound installation that explores technology, physical space and geometric sound structures which can be listened to online.

With over 65 international participants at the third How It Is Symposium, this digital event displayed the global impact of Beckett’s novel and the wide variety of research that is currently taking place from translation, to stagings, and technological responses. Inspired by the new circumstances, this was an important and timely symposium that utilised technology to provide a crucial platform for sharing research.

More information on GSLI’s How It Is is available from their website.

Chloe Duane is a postgraduate researcher in the Department of English Literature.