In Ukraine’s ongoing negotiations with Russia over its invasion, Vladimir Putin seems to be aiming at the very least to retain Crimea for Russia and ensure recognition for the Donetsk and Luhansk people’s republics. These breakaway states claim much more territory than they control as of now, and to recognise them would be a decisive change in Ukraine’s borders. 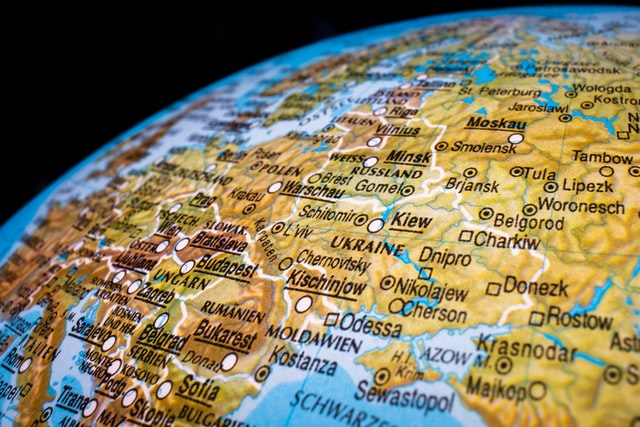 One of the many striking aspects of the invasion has been how much histories of border-drawing seem to matter. Days before invading, the Russian president claimed that “modern Ukraine was entirely created by … communist Russia”. In doing this, he said, Lenin transferred “to the newly, often arbitrarily formed administrative units – the union republics – vast territories that had nothing to do with them”.

As with any claim that certain borders are arbitrary, it is not obvious what exactly that means. All land borders could somehow be considered arbitrary, if you think of the way modern states are expected to have precise and fixed lines as borders. These are not found in nature but drawn by people.

The world was not always divided up in this way. Historically, societies had various ways of understanding territory. In many societies from pre-colonial India to early modern Europe, territories could be exchanged simply by naming them.

Where the boundaries of those named territories were, however, often depended on the memories of inhabitants, rather than official maps. The systematic measuring, marking, and mapping of political boundaries in order to fix them as precise lines began in the 17th century, and was applied globally only in the late 19th century.

If all borders are somehow human-made, then, how should we approach Putin’s claim that Ukraine’s borders are arbitrary? A good point of comparison is the Paris Peace Conference of 1919-1920. This was the meeting of the victorious powers of the first world war to determine the post-war order – which took place just as Soviet Russia was in formation.

It was widely expected that nation states would emerge throughout Europe, creating minimal ethnic minorities. However, sizeable majority German-speaking areas were incorporated into Czechoslovakia and Italy, partly because it was thought that mountain boundaries brought security. The world discovered how wrong this was when Hitler annexed much of the mountainous borderland surrounding Czechoslovakia – the Sudetenland – in 1938 without firing a shot.

The Soviet Union was not invited to the Paris Peace Conference, but the logic behind the boundaries drawn between its founding republics was remarkably similar. Both were generally based on demographic data, economic and geographical analysis, and prior administrative units. By that standard, the Russia-Ukraine border was by no means particularly arbitrary.

The All-Russian Central Executive Committee created the broad outline of the Ukraine-Russia border in 1919 by including in Ukraine, roughly, the former Russian imperial provinces of Volhynia, Kiev, Chernigov, Kharkov and Ekaterinoslav. It based this decision on the 1897 Russian census, where each district in these provinces shows a majority of “Malorussians” (“Little Russians” – or Ukrainians).

If the demographic data gave anyone cause to complain, it should have been Ukraine. In fact the Ukrainian delegates to the Central Executive Committee did ask in 1924 for Voronezh and Kursk provinces as well, on the basis of their significant Ukrainian population, but this request was denied.

The idea of ‘arbitrary’ colonial boundaries

Another aspect of Putin’s ideology is that it plays off the idea of Ukraine as part of what he referred to as “the so-called colonial heritage of the Russian Empire”. He claims, in effect, that Ukraine’s historical memory is selective. It erases its natural historic ties to Russia, but is still perfectly able to remember the boundaries imposed on it by Russia as a colonial power.

Putin is putting a new spin on an old narrative: that borders inherited from colonial times are suspicious and must be open to revision. European colonialism imposed boundaries on much of the world, particularly Africa and Asia. According to this narrative, these boundaries are problematic, because they were vaguely delimited or paid no attention to previous boundaries of ethnic communities.

The problem with this is that simply having a colonial history does not make some borders any more or less artificial than other borders. Nation-states can be just as artificial.

In fact, modern borderlines, fixed and precise as they are, were systematically used for the first time in a colonial context – the thirteen colonies of British North America. This was well before such borders became common in Europe.

What does this have to do with Putin’s explanation for Russia’s recent military actions in Ukraine? Ultimately, attempts to correct “colonial” borders tend to do little but recreate a new version of imperialism, and Putin made his imperial vision clear in his pre-invasion speech.

Putin’s is not the only proposal to correct “colonial” borders to come out of an imperial power. A number of proposals to improve upon the “Sykes-Picot” borders of the Middle East, for example, surfaced in the USA after 2003. And in 2006, then-Senator Joe Biden suggested a federal partition of Iraq along sectarian divisions, while maintaining a loose central government.

Critics claimed that the USA was no better than the former colonial powers, simply imitating their policies of dividing up the region from outside. The difference is that Putin has openly used this historical narrative as a pretext for invasion.

Dr Kerry Goettlich is Lecturer in International Security, Department of Politics and International Relations at the University of Reading.