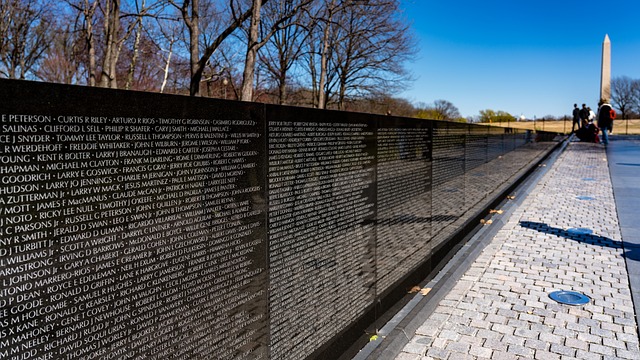 2023 marks the 50th anniversary of the US withdrawal from Vietnam and the war still casts long shadows over American life.

The cost in lives was enormous. Over almost 20 years, more than 2.7 million Americans served in uniform in the conflict, and around 58,318 lost their lives. Estimates of Vietnamese deaths are more than 3 million civilians and soldiers from both sides. Thousands of US veterans suffered from post-traumatic stress disorder and tried to readjust on their return home.

Americans struggled to make sense of events in Vietnam. They had to come to terms with the reality that for the first time in the country’s history, they had lost a war. Disturbing televised images of conditions on the ground and war atrocities made them question the wisdom and the morality of US foreign policy.

Vietnam had been a very different experience from the second world war. The “good war” against the fascist powers in Germany, Italy and Japan had united the country in a fight to save democracy and freedom and made it the leader of the free world. Vietnam had divided the nation and turned it into the world’s bully.

Soldiers returning from south-east Asia were received with mixed feelings: anger and hostility in some cases, but mostly indifference and a desire to forget and move on. In the decades that followed the end of the conflict, the national trauma shaped many aspects of American politics, society and culture.

Since the end of the Vietnam war, most Americans have looked with fear at any US intervention or use of force abroad that might end up in another long and bloody stalemate. In 1973, Congress passed the War Powers Resolution designed to limit the president’s ability to commit forces to conflicts without congressional support. This so-called Vietnam syndrome, a phrase apparently coined by President Richard Nixon, has been haunting US foreign and military policy ever since.

President Ronald Reagan criticised former presidents Gerald Ford and Jimmy Carter for being constrained by the ghost of Vietnam and showing weakness and overcaution in international affairs. Trying to reinvigorate US foreign policy and put Vietnam in the past, he used bold rhetoric to tell Americans to stop feeling guilty about the devastation brought about by the war and stop questioning the morality of the war because America had fought for “a noble cause”. Yet, in practice, his foreign policy was deeply influenced by persistent anxiety about getting into a new quagmire.

Reagan’s military intervention in Grenada in 1983 was wrapped in secrecy to head off any pre-emptive action by the communist dictatorship in control of the island but also to prevent an anti-interventionist Congress from leaking to the press with the prediction that Grenada was going to become another Vietnam. A year later, following the death of 241 US servicemen in Beirut barracks, Reagan withdrew US forces from Lebanon because he didn’t want to repeat the Vietnam experience in the Middle East.

Similarly, President George H.W. Bush was careful to prevent the Gulf War of 1990-91 from turning into another Vietnam. To ensure that US intervention had the moral legitimacy Vietnam had lacked, he secured UN backing and led a coalition of 35 countries to swiftly eject Iraqi forces out of Kuwait. The quick victory led Bush to declare: “By God, we have kicked the Vietnam Syndrome once and for all.” For President Bill Clinton putting US boots on the ground was an option to avoid at all costs as he declared during the 1998-99 Kosovo war.

Though very different in nature, the parallels between the recent wars in Iraq and in Afghanistan and the Vietnam war have helped ensure Vietnam’s continued relevance to foreign policy decisions. George W. Bush failed to draw lessons from Vietnam and fell into some of the same traps that the US government had encountered in Vietnam. Initial carefully targeted strikes against al-Qaida and the Taliban in Afghanistan in response to the 9/11 attacks turned into a 20-year-long war that has taken the lives of more than 2,300  US military personnel and an estimated 43,074 Afghan civilians.

Like the Pentagon Papers in 1971 which revealed the blunders and intelligence failures in Vietnam, the publication of the Afghanistan Papers by the Washington Post in December 2019 showed that the US lacked realistic objectives and a clear exit strategy in Afghanistan. They also revealed another sad parallel between the two conflicts. Military and government officials in both the Bush and Obama administrations deliberately misrepresented conditions in Afghanistan to appease an American public opinion suffering from war fatigue.

Current president Joe Biden rejected any comparison between his withdrawal from Afghanistan and the US retreat from Vietnam. His response was unequivocal: “None whatsoever. Zero.” Yet, it is impossible to look at images of desperate Afghans running alongside a plane at what was then Hamid Karzai international airport on August 31 2021, and not compare them to the image of the US helicopter perched on an apartment building, loaded with evacuees, in Saigon in 1975. Meanwhile, 50 years on, Biden is making strengthening relations with Vietnam a key part of his foreign policy agenda for Asia, building on the decades-long project of reconciliation. However, the lessons from the Vietnam war remain the prism through which US policymakers, media and public opinion often view armed conflicts.

Mara Oliva is an Associate Professor in History at the University of Reading.

This article is republished from The Conversation under a Creative Commons Licence.