Dr Kristina West explores the resurgence of the word ‘witch’ in 21st century public discourse in a new post for The Conversation. 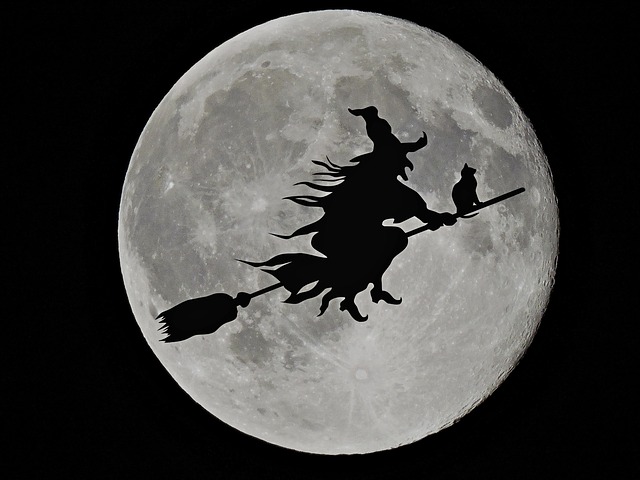 Halloween is a time when cultural norms are turned upside down: we encourage children to dress up as creatures from nightmares – witches, zombies, vampires – and we send them out to wander the streets in the dark, demanding sweets from strangers. Yet the witch, so often invoked as a sign of societal disruption through history, is no longer content to be confined either to Halloween or to history – if, indeed, she ever was.

Witch hunts didn’t end with the cataclysmic events of Salem in 1692. In Britain, the last witch trial took place in 1944, when Helen Duncan was jailed for claiming to have conjured up the spirit of a dead sailor from the HMS Barham – the sinking of the ship by the Germans was classified information, and the authorities were worried that she might also reveal details of the D-Day landing plans. She was released after nine months, and lived to see the repeal of the Witchcraft Act in 1951, although she continued practising spiritualism for the rest of her life.

The practice of witchcraft continues. Browse any new age bookshop, visit the Witch Museum in Boscastle in Cornwall, or Pendle in Lancashire, where Britain’s most famous witch trial took place in 1612, or the tiny village of Burley in the New Forest where the so-called “White Witch”, Sybil Leek, lived in the 1950s before she was forced by hostile locals to flee to the US. You’ll find that the books available are not just about the history of witches, but their present existence and practices. A current exhibition at the Ashmolean Museum in Oxford also shows that both popular and academic interest in witchcraft is thriving.

Every witch way in US politics

But the witch in Western society continues to exist in other ways too, primarily self-identified and given to using political and sociopolitical language rather than incantations. The inauguration of the US president, Donald Trump, provoked women’s protest marches around the world, with some banners reading: “Hex the Patriarchy”, “Witches for Black Lives”, and “We are the daughters of the witches you didn’t burn, and we are pissed off.”

An event even took place in October in Brooklyn, New York, to hex supreme court justice, Brett Kavanaugh. The meeting was sold out and the protest made headlines across the world. It is no surprise that, at a time when women’s rights are under increasing pressure in some areas of Western society, that the witch should be used as a feminist symbol of power, both in language and in the claimed reality of witchcraft.

But there are other people looking to get in on the act. Trump has repeatedly stated that the 2016 investigation into his alleged collusion with Russia was “the biggest witch hunt of a politician in American history”. According to the New York Times, Trump used the term “witch hunt” – casting himself as victim – in tweets more than 110 times in the period May 2017-18.

Further, the #MeToo and #TimesUp movements led Woody Allen to invoke the spectre of Salem, but with men as accused witches, saying: “You also don’t want it to lead to a witch-hunt atmosphere, a Salem atmosphere, where every guy in an office who winks at a woman is suddenly having to call a lawyer to defend himself.” In these cases, men are positioning themselves and their peers in the role of witches, but in this scenario the witch is an innocent, a victim. These men are actually denying their own status as witches, using the power associated with claims to victimhood as a weapon against those considered oppressors. They position their accusers as powerful, while simultaneously accusing them of abusing that power.

Yet Trump – and countless others – still use “witch” as a term of vilification against women. During the 2016 presidential election campaign, Hillary Clinton was repeatedly defined as a witch by Trump supporters: Clinton was “the wicked witch of the Left”, pictured with green skin, pointy hat, and riding a broomstick; her opponents claimed she smelt of sulphur. Aligning her with such stereotypical representations of witchcraft evidenced the power plays at the root of such blatant and public misogyny.

This concentration on the binary nature of witch accusations – on the guilt or innocence of both accusers and accused – shows how the reclamation of the witch for the 21st century is, as it has always been, concerned with power and, frequently, the relative positioning of gender. The accusation of witchcraft is one that has been used to undermine the status of both women and children – who have also been branded as witches, from Salem in 17th-century America to Nigeria today.

As American historian and philosopher Perry Miller has argued regarding the difficulties of understanding the Salem witch trials, “language itself proves treacherous” – by which he meant we struggle to put ourselves into the minds of the Puritans who threw around accusations of witchery in 17th-century New England. And now, in the early 21st century, it seems that efforts to understand the resurgence of the word “witch” in public discourse may be no less troubled.

This post was first published on The Conversation, 29 October 2018. Dr Kristina West is  a sessional lecturer in English and American Literature at the University of Reading. She is currently working on three books, on Louisa May Alcott; Transcendentalism and Childhood; and the Salem Witch Trials.