The Classics Department of Reading recently announced the release of a special video called What Can a Dog Called Margarita Teach us About Ancient Rome? In this video Prof. Peter Kruschwitz (University of Vienna), Prof. Xavier Espluga (University of Barcelona) and Dr. María Limón (University of Seville) discuss the lettered world of ancient Rome and how ancient peoples interacted with the world around them. The video was filmed, directed and edited by James Rattee, hosted by RUCD and includes digital footage from Prof. Matthew Nicholls’ Virtual Rome model. 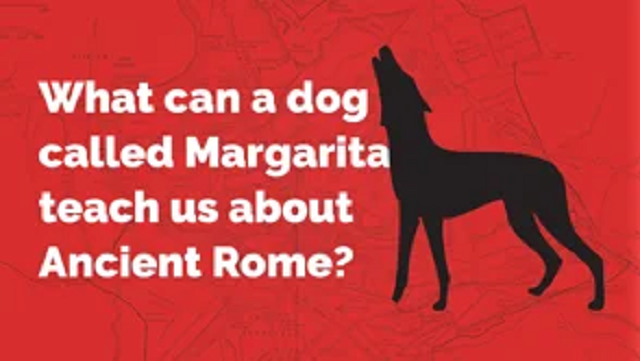 Following a British Academy Visiting Fellowship held by María at the University of Reading, the film production has been the result of British Academy follow-on funding for outreach and public dissemination of research. The British Museum very kindly gave permission to access their facilities for the purpose of this research.

To accompany the release, Bunny Waring (University of Reading) invited Peter, María and Xavier to discuss the collective motivations of making this video and what is next for this multi-university collaborative project centred on ancient verse inscriptions.

“All three of us [Peter, Maria, Xavier] share the same passion: our enthusiasm for Roman inscriptions, especially inscriptions composed in verse. To us, those inscriptions are not just stones or pieces of metal that happen to have some poetry inscribed on them. They are carriers of art. They are visible, tangible manifestations of a universal artistic practice of Roman times, spanning the empire across time and space, with thousands of examples surviving to the present day.

“This art was produced by individuals from all runs of life, and it was produced in the city of Rome just as much as it can be found at Hadrian’s Wall, the shores of the Black Sea, or in the Roman settlement of North Africa. We can relate to these individuals very easily because they’re not just some remote elite: they are people with everyday occupations, everyday hopes and worries, everyday problems. Like (most of) us – the other 99%, so to speak, far away from the palaces and lives of the elite. What is more, these individuals inhabited the very spaces, geographically and socially, that we still inhabit today, along with all their challenges.”

An interdisciplinary project needs accessibility, and this video is already available with closed captions in English, German, Italian, Romanian and Spanish. With over 800 views, this project has already reached a diversity of audiences from the academic to the lunch-time browsers, and with each share this little, loved lap-dog is bringing together young and old from opposite ends of the globe. This video is a clear example of how ancient languages and cultures can be insightful, applicable and outright fascinating to the modern world. Going forward, Peter, Maria and Xavier are keen to reach out to educators in schools, universities, and museums as well as to cultural managers and policy makers in relevant areas.

Both the full interview and video are viewable online.

Bunny Waring is an Administrative Assistant in the Department of Classics.