A multi-media installation created by Dr Teresa Murjas, Associate Professor in the Department of Film, Theatre & Television has inspired the work of The National Archives, Kew and its national Explore Your Archive campaign (18-28 November 2017). 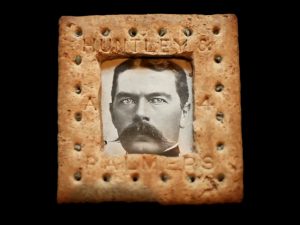 The film, sound and object-based installation – The First World War in Biscuits – is an interpretation of one of the archives held at Reading Museum and the Museum of English Rural Life (MERL). In August 2017 Teresa welcomed colleagues from The National Archives (TNA), together with The Great British Bake-off finalist, Miranda Gore-Brown, to Reading. She gave them a tour of Reading Museum and the MERL, where she had selected archival materials and artefacts from the Huntley & Palmers collection for them to view.

Teresa’s multi-media interpretation of the collection has inspired the TNA to include an ‘Edible Archives’ theme in this year’s Explore your Archive campaign. The campaign is designed to help professionals, volunteers, interns and students celebrate the unique potential of archives to excite people, bring communities together and tell amazing stories. Teresa’s installation does just that, telling the stories of First World War soldiers, through Huntley & Palmers biscuits.

The First World War in Biscuits

Reading town is often cited as being the home of the four ‘B’s – biscuits, beer, bricks and bulbs. The Huntley & Palmers biscuit factory is a local landmark and during the First World War it played a crucial role supplying ration biscuits to troops on the front line.

The ration biscuits weren’t particularly appetizing – the No 4 standard biscuit, for example, contained no sugar and was very hard. But the 10cm square biscuits provided vital sustenance to soldiers in the trenches who soaked them in water or tea to make them more appealing.

Some soldiers preferred to repurpose their biscuits and creatively transformed them into picture frames, postcards and canvases to send home to friends and family with personal messages.

It is a small and rare collection of such modified biscuits, currently on display at Reading Museum that provided the key ingredient for Dr Teresa Murjas’ stunning audio-visual, object-inspired installation.

The installation brings to life the harsh reality of war and the conditions soldiers faced when fighting on the front line.

Teresa’s installation explores the relationship between food, creativity and conflict, bringing the Huntley & Palmers archive to life in a striking and innovative way. It shows the 100 year-old ration biscuits alongside a range of archival materials from the First World War. It also includes new audio interviews and three new, contrasting films. Alongside its reflections on the role the factory played as part of the war effort, the installation brings to life the harsh reality of war and the conditions soldiers faced when fighting on the front line. It also reflects on the emotional and social role of the biscuits in the soldiers’ lives and explores the broader issues of separation and loss.

For the audio interviews included in the installation, Rachel Duffett, author of ‘Stomach for Fighting: Food and Soldiers of the Great War’ (Manchester University Press, 2012), discusses her research on the significant role food plays during times of conflict and reflects on the ration biscuits displayed in the installation. Andrew Robertshaw, who wrote ‘Feeding Tommy: Battlefield Recipes from the First World War’ (Spellmount, 2013), provided an insight into how ration biscuits were used in cooking, while David Bitton, author of ‘Reading in the Great War’ (Pen and Sword Military, 2014) assesses the contributions Huntley & Palmers made to the war effort.

The First World War in Biscuits was initially shown at Reading Museum in 2014/15, during the First World War centenary, as part of the collaborative Reading Connections: Reading at War project with the Museum of English Rural Life. It then visited the Minories Gallery in the garrison town of Colchester in 2015.

The audio visual story of Huntley & Palmers in the First World War was produced by the Department of Film, Theatre & Television at the University of Reading. The installation was created by Dr Teresa Murjas (Associate Professor) with the assistance of Dr James Rattee (PhD graduate), Sonya Chenery (PhD student) and Laura Farrell (Researcher). The ongoing project has been supported by the University of Reading, the Museum of English Rural Life in Reading, Reading Museum, Arts Council England, the University of Essex, and the AHRC First World War Research Centre ‘Everyday Lives in War’.