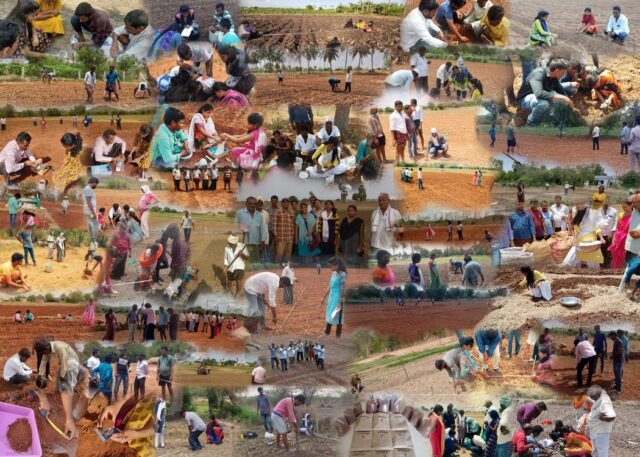 In response to rising challenges for farmers in India, the Government of Andhra Pradesh a state in southeast India, have been encouraging farmers to adopt Zero Budget Natural Farming (ZBNF) since 2016. University of Reading researchers have been collaborating with colleagues in Andhra Pradesh to examine potential benefits of ZBNF for the quality of soils, the crops that grow on them, and the people that work them.

Agriculture is central to the Indian economy – it is the second largest producer of rice, wheat, sugarcane, groundnut, vegetables, fruit and cotton in the world. This production contributes more than 15% of the total value of national goods and services.

During the ‘Green Revolution’, starting in the 1960s, technology and so-called modern techniques were adopted to increase crop yields on Indian farmland. These practices often involved large volumes of synthetic chemical fertilisers and pesticides which could damage the environment (soil and water quality), human health (exposure to toxic chemicals) and farmer finances (farmers trapped in a cycle of debt to pay for fertilisers and pesticides).

The United Nations has stated that farms that are ‘working with nature’ to minimise environmental impacts, are more resilient to changes in climate. Minimising these impacts are, for example, critical to eliminate hunger and malnutrition. ZBNF was intended to do just that.

ZBNF is a low-cost farming system that avoids the use of synthetic fertilisers and pesticides and instead is based on homemade amendments, made from locally sourced materials such as cow dung, urine and plant residues (mulch). ZBNF has been adopted enthusiastically in Andhra Pradesh with nearly 600,000 farmers currently engaged. The intention is to expand adoption of the practice to 6 million farmers across the state. However, the movement has been criticised by some due to the lack of scientific evidence of its effectiveness to provide enough food for the growing Indian population.

Since 2019, an interdisciplinary team of social and soil scientists from the University of Reading have been collaborating with the non-profit Rythu Sahikara Samstha (RySS), which is tasked with implementing ZBNF. The soil science team is evaluating the performance of ZBNF by contrasting it with other farming techniques currently being used in Andhra Pradesh, such as conventional and organic farming.

A total of 44 farm experiments, spanning 800km and three seasons were conducted across the state. These experiments were conducted by local agricultural college graduates, on their own land. All participants were fully trained by project staff. Regular soil and crop measurements were taken throughout the season and each plot was harvested separately at the end of the season. This allowed us to compare yield, soil quality, and crop quality for each of the farming techniques.

Initial published results from the first season suggested that ZBNF could achieve a similar yield to organic and conventional alternatives in the short term, despite being devoid of synthetic fertilisers and pesticides. Further investigation in subsequent seasons suggested that there may even be an increased yield in ZBNF, particularly in the low rainfall areas.

The indication that ZBNF might be more successful in the low rainfall areas has sparked a second phase of the research project. Instead of running short term field experiments, the team will be sampling from ‘real life’ farms who have been practising ZBNF, and contrasting them with neighbouring conventional farms. Water is a scarce resource in this area so understanding the provision of water from the soil to plants is much needed research. Understanding how ZBNF  impacts soil moisture and temperature will be vital in the assessment of its potential to provide stable food supply in a changing climate.

You can read more about the project here, keep an eye on the news page for updates on progress.

Sarah Duddigan is a Research Fellow in Geography and Environmental Science at the University of Reading.