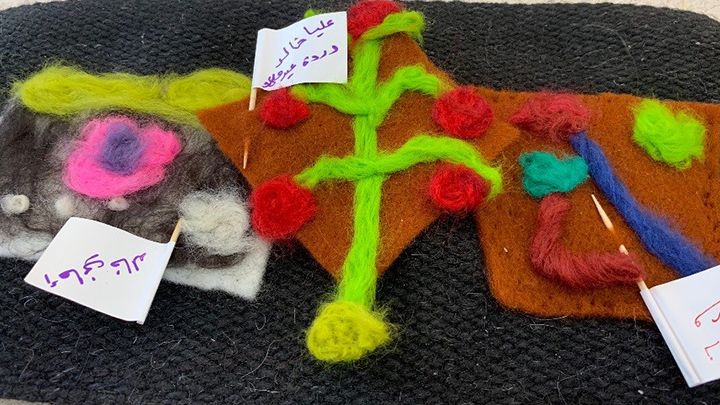 Jessica Jacobs and Emily O’Hare ran two workshops with local women from Faynan and Greigra in June to start work on a textile hanging for the museum. At the first of these, held in the Faynan Museum, the women began to learn felting as a technique to combine with their traditional textile skills.

The second workshop was in the Prince Hussein Cooperative Centre in Greigra and invited women to talk about their interests in textiles. They described how they like to make textiles in bright colours because these brighten up the inside of their Bedouin tents, which are made from dark colours like brown and black. Blending red, yellow, and other bright colours helps to reveal the beauty of their work.

The felting workshops provided a space within which to start talking about the subject of communities, mapping, and handicraft skills. Not just talking, but also starting to make representations of what is valued, which will eventually be used within the textile hanging for the museum. The workshops also allowed the participants to explore the potential for handicraft production in the region by finding out what handicrafts are currently made in Faynan/Greigra, for what purpose, and what the women enjoy making.

Because of the limited time available and the large numbers of participants, there was insufficient time to work on the design for the textile hanging for the museum. Most of the work produced was quite generic, such as flowers.  Possible designs will be discussed in the next workshop, scheduled for November 2019. (Emily O’Mara 2019)