OUR PAST, OUR FUTURE, ALL TOGETHER IN FAYNAN (OPOF) is an international project within which academics from the UK and Jordan will work with the local community in Faynan, southern Jordan, to use the rich cultural heritage of the area to support sustainable economic development. The project is led by Steven Mithen from the University of Reading and involves researchers from the Council of British Research in the Levant, The Department of Antiquities of Jordan, the Universities of Leeds and Queen Mary College in the UK and the Universities of Jordan and Petra in Jordan. The project is funded by the Newton Khalidi Fund and The Arts and Humanities Research Council (AHRC), as part of the Global Challenges Research Fund (GCRF).

The objective of the ‘OUR PAST, OUR FUTURE, ALL TOGETHER IN FAYNAN’ project is to build community engagement with the Faynan Museum and facilities for eco-tourism to support social cohesiveness, individual well-being and sustainable economic development in Faynan.

Faynan is located south of the Dead Sea on the eastern side of Wadi Araba in southern Jordan. This is an economically deprived area, with pastoralism and irrigation-based farming providing livelihood to members of four Bedouin tribes who live within Faynan: the ‘Ammarin, Sa’idiyyin, Rashaydah and ‘Azazmah. It has a remarkable archaeological landscape that has been discovered and explored by research teams from the UK, US and Germany over the last forty years, all with support from the Jordanian Department of Antiquities. While there have been many academic publications, this cultural heritage has not been sufficiently used to support eco-tourism into Faynan which could be a major source of income for sustainable economic growth. Neither has the cultural heritage been made accessible to the local community and used to support social cohesiveness, education and well-being.

The establishment of the Faynan Museum by the Department of Antiquities has provided an opportunity to make progress on both of these matters. Between 2016 and 2018, an AHRC funded project (Discovering WF16) established the first displays within the museum and provided a small number of information boards at the archaeological sites. The success of that project demonstrated the value of further developing the museum. This new project will involve a close collaboration between UK and Jordanian academics, and the Faynan community. It has the full support of the Jordanian Ministry of Tourism and Antiquities and will make a step change in the ability of the museum to support the local community for sustainable development. By raising awareness and understanding, the project will also help protect and conserve the cultural heritage of Faynan in the face of an expansion of irrigation farming, road and dam development.

The project has gathered an interdisciplinary team that will deliver six research strands. 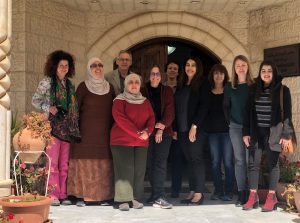