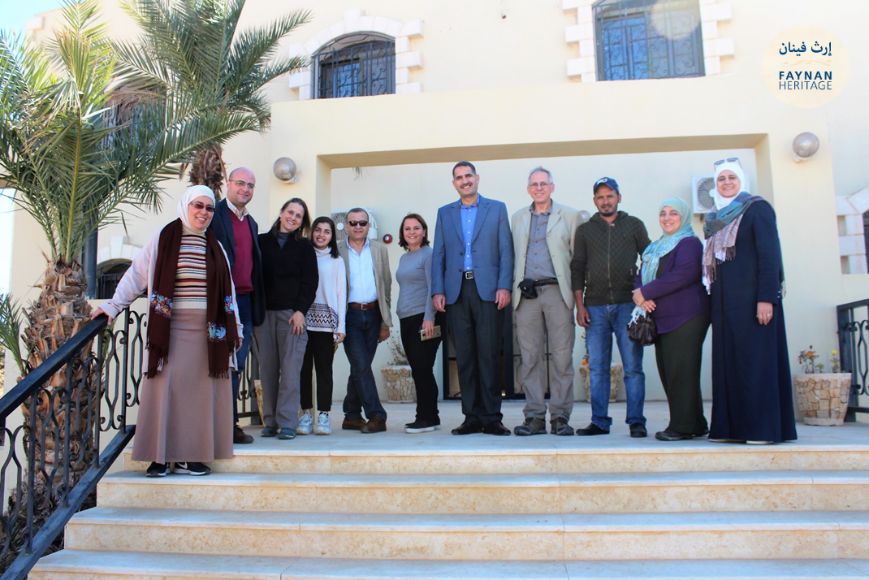 Our Past Our Future All Together in Faynan (OPOF) project team including the Project Principal Investigator, Professor Steven Mithen, and Dr Carol Palmer, Director of the Council for British Research in the Levant, invited the Department of Antiquities in Jordan to visit Wadi Faynan to observe the progress in Faynan Museum during the implementation of previous projects funded by the AHRC over the last two years and during the currently ongoing OPOF project. Other project collaborative parties who were able to join included the team at the Council for British Research in the Levant, University of Reading, University of Petra, and University of Jordan.

The Director General of the Department of Antiquities, his Excellency, Mr. Yazid Elayan, alongside with the Director of Museums and Awareness, Ms. Samia Khouri, the Director of General Director’s Office, Mr. Ghassan Al-Deir, and Faynan Museum Curator, Mr. Ali Alhasaseen, spent a day in Wadi Faynan.  The group was pleased to be joined by representatives from the Wadi Araba Development Company and the NGO Future Pioneers for Empowering Communities (FPEC) who wished to learn more about the Faynan cultural heritage and on-going projects.

The day began with a tour at Faynan Museum, followed by a walk along part of what will soon become the Faynan Heritage Trail. Discussion focused on how the museum can be developed to become a community hub and the exact locations of where the information boards for the heritage trail will be erected. Overall, all parties worked towards developing a shared vision for promoting and  preserving Faynan heritage.  After a rewarding day full of accomplishments, we ate lunch at the recently established Wadi Ghweir Camp, that is led by a cooperative from the Faynan community.

We are grateful for all the support provided by the Department of Antiquities in Jordan and the people of Faynan and Greigra in Southern Jordan, and we hope that our collaborations continue to contribute to sustaining the cultural heritage of Jordan through community engagement, conservation, quality education, and sustainable participatory projects and programs.