The WWRP aims to advance and promote research activities on weather, its prediction and its impact on society. The improvements in science and operational prediction research are driven by international cooperation. The working groups of WWRP bring together leading scientists to accelerate advances by connecting research across nations and to create new initiatives that aim to focus activity on problems of shared international priority. This project is an initiative associated with the WG on Predictability, Dynamics and Ensemble Forecasting.

The Polar Prediction Project (PPP) is a 10-year (2013–2022) endeavour with the aim of promoting cooperative international research enabling development of improved weather and environmental prediction services for the polar regions, on time scales from hours to seasonal.

The Year of Polar Prediction (YOPP) is the flagship activity of the Polar Prediction Project coordinating a period of intensive observing, modelling, verification, user-engagement and education activities. The Year of Polar Prediction was composed of three phases with the core phase taking place during the period May 2017 to June 2019. This was then extended to cover the full extent of the MOSAIC experiment, billed as the largest polar expedition in history, where the Polar Stern ship was locked into the Arctic sea ice pack for an entire year, drifting with the ice from north of Russia towards Greenland. The ship returned to its home port, Bremerhaven in Germany, in October 2020 (see BBC News article).

The YOPP Data Portal provides metadata and links to respective data sets generated during the Year of Polar Prediction.

Programme of research, funded by ONR (USA), on Overcoming the Barrier to Extended Range Prediction over the Arctic. The team from this programme are working with partners at LMD and LATMOS in France. The joint team will coordinate the operation of the SAFIRE Falcon aircraft that will join the experiment in Svalbard. 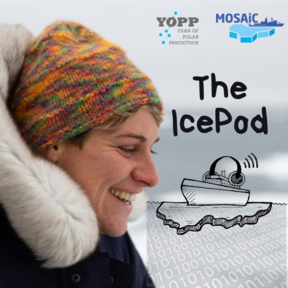 The podcast site from the MOSAIC experiment describing experiences of researchers in the Arctic.

Credits for the photographs in the banners across the top of each webpage on our site:

About Us – Tom Lachlan-Cope (BAS). Loading the MASIN Twin Otter.