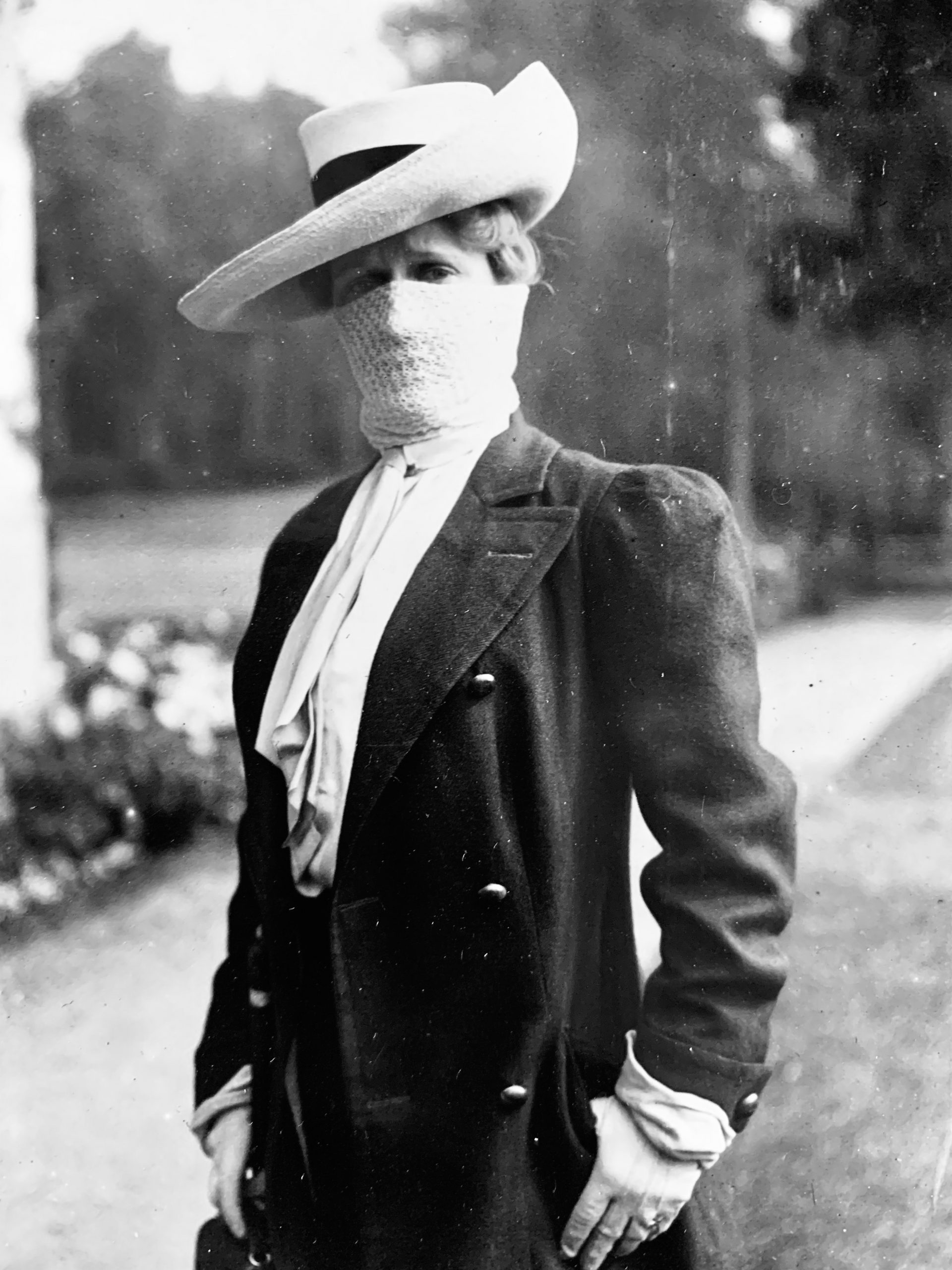 The Astor family name is synonymous with Cliveden and Plymouth however, Scotland was very important to the family too. Waldorf and Nancy Astor first spent time in Scotland shortly after their marriage in 1906 and later, Scotland provided the family with some respite from political life. The Scottish countryside supported their love of healthy living and provided everything that the outdoors had to offer. Nancy had grown up in the Virginia countryside and Scotland suited her love of the open spaces and outdoor sports. In 1908 the family first rented properties in Lochluichart and Banchory where they holidayed with family and friends.
. 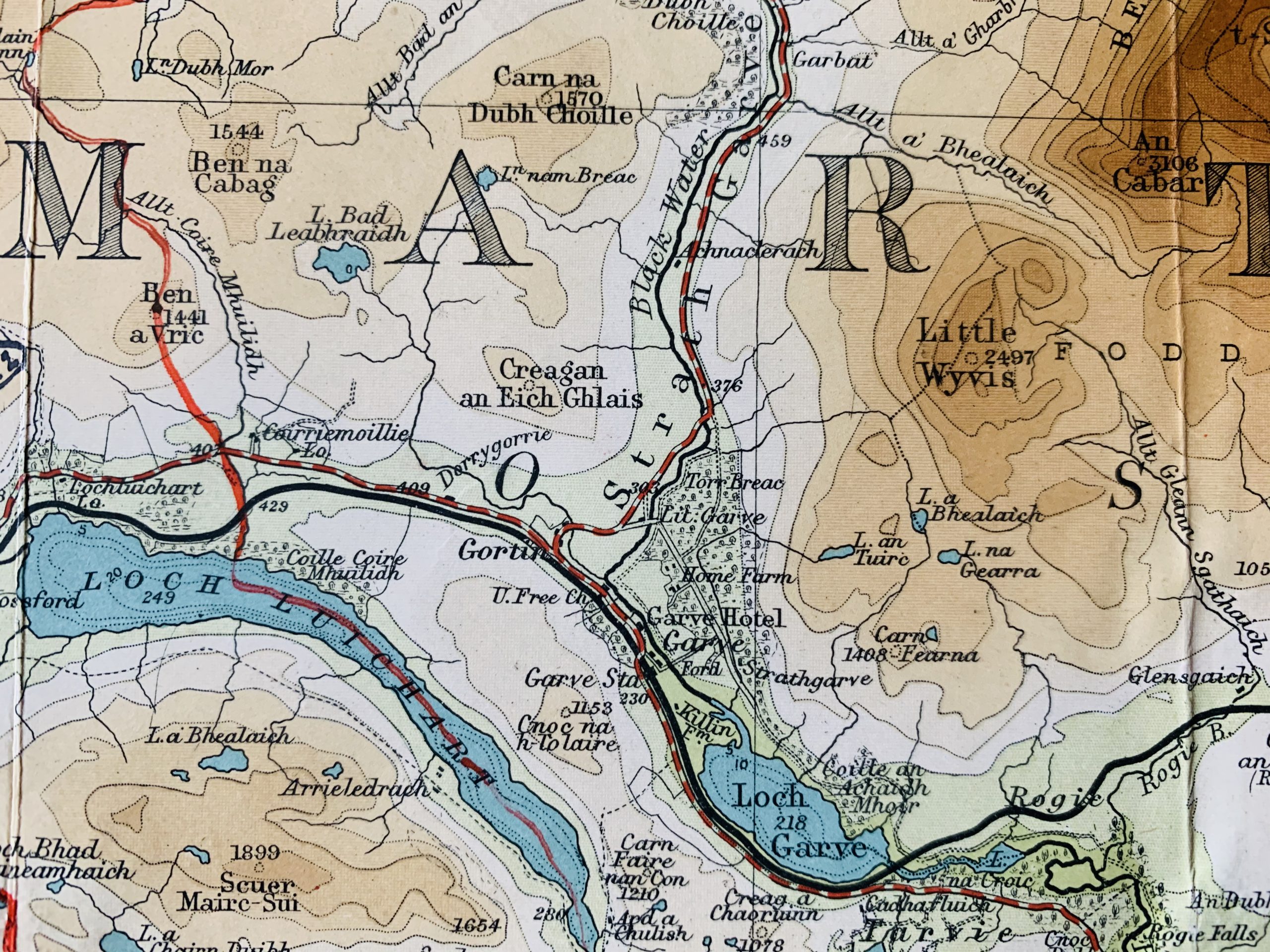 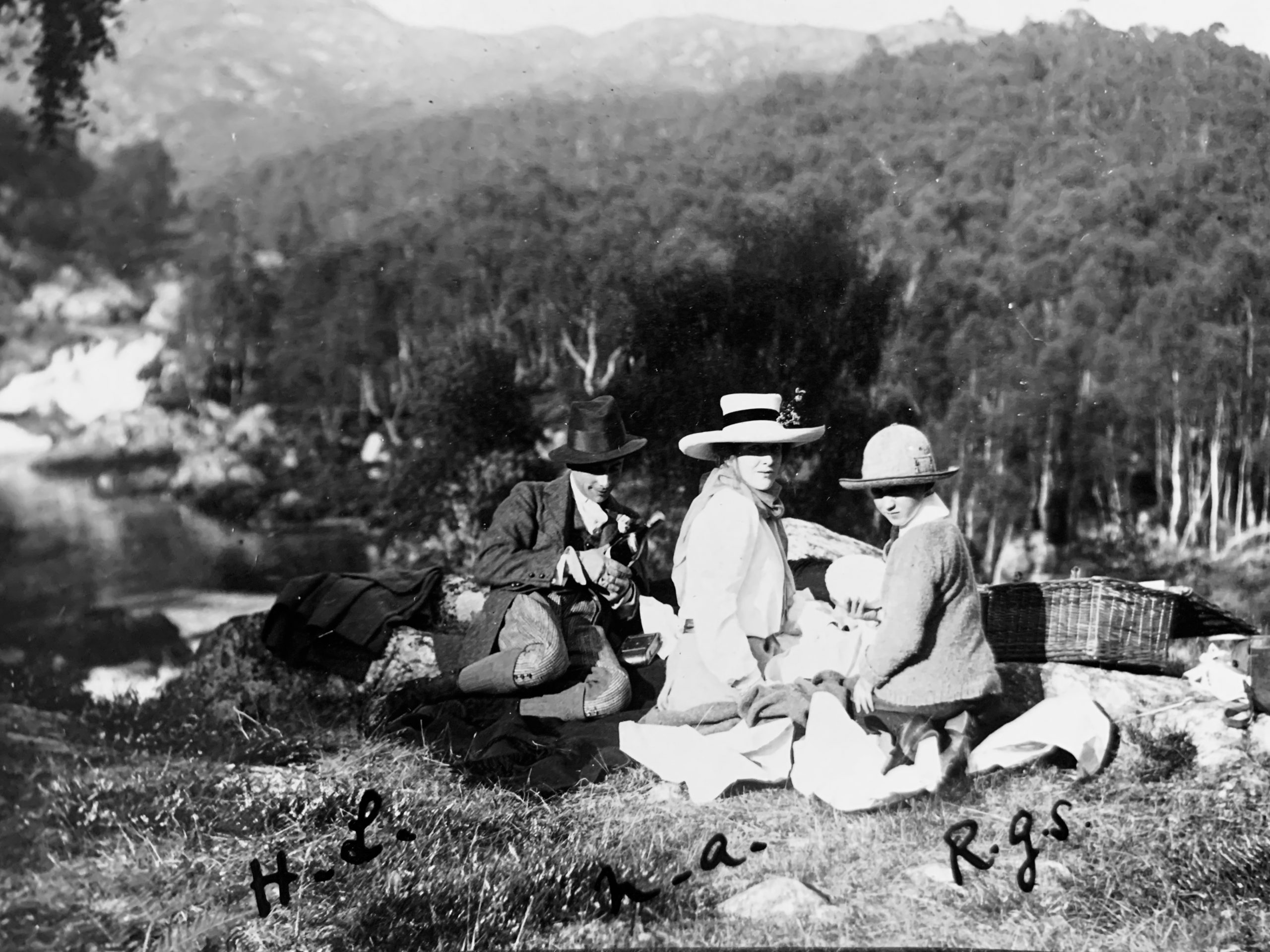 Picnic above the loch
.
Ultimately, the Astors so enjoyed life in Scotland that they purchased an estate on the Hebridean Island of Jura in winter  1919/1920 which included Corrienahera, Lagg, Gatehouse, Ardmenish, Adrfernal, Knockrome and part of Jura forest. In 1928 they sold Ardlusaa in the North end of the Island and moved down to live at Tarbert.
. 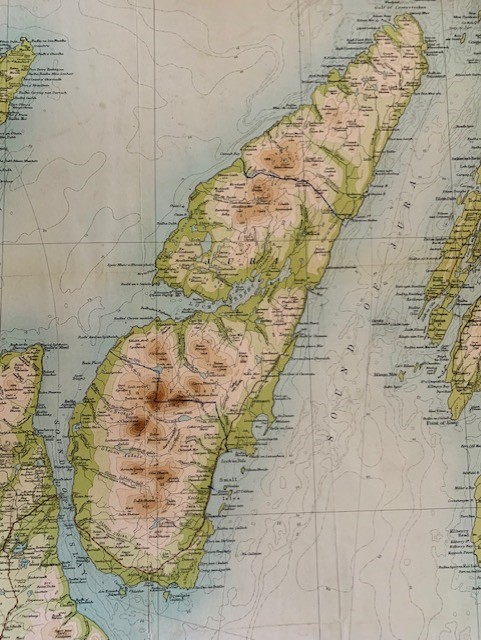 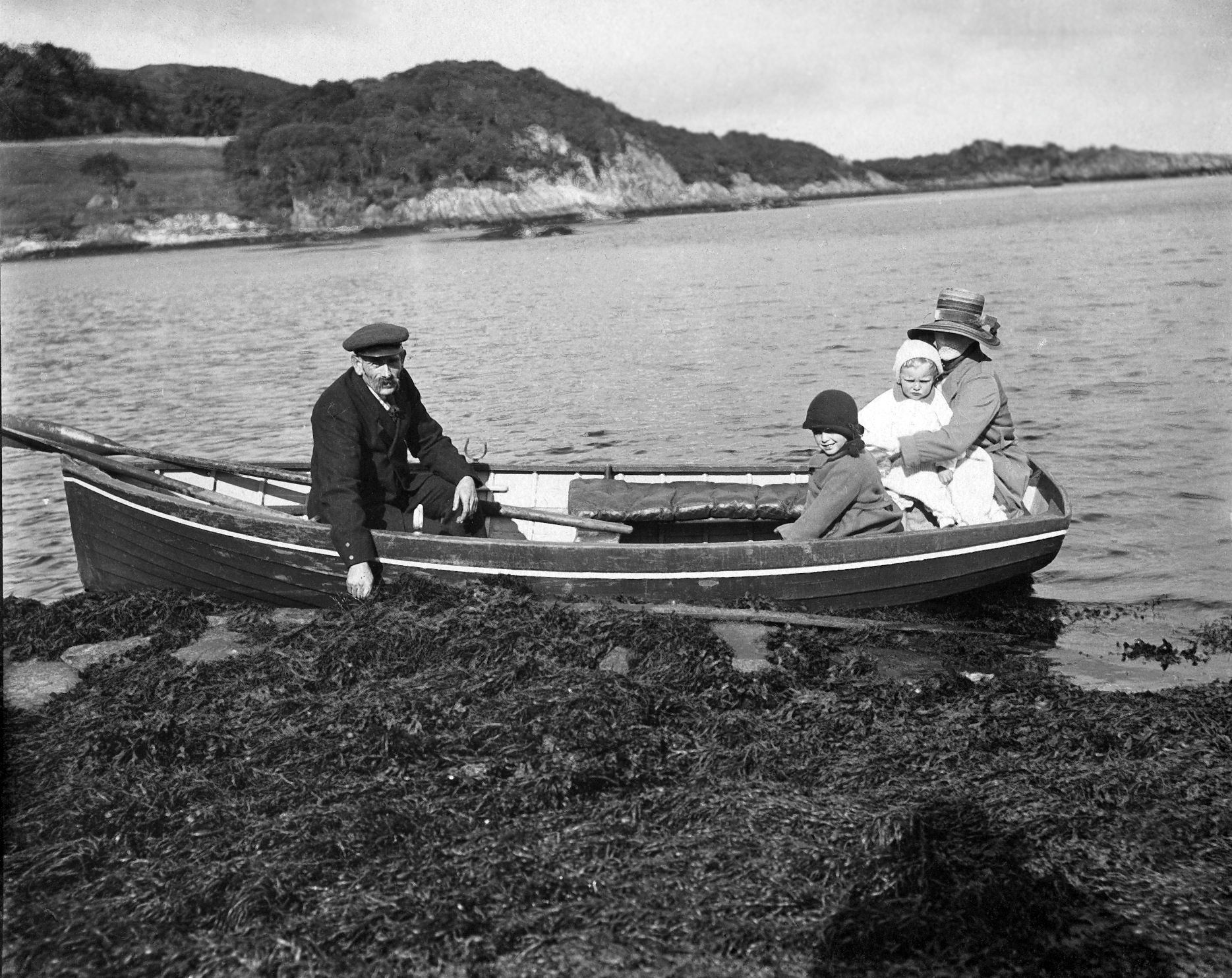 Arriving at Ardlussa with Mr Darroch
.

Nancy & the children setting off on a picnic and Nancy and Jakie Astor riding in Ardlussa
.
Waldorf in particular liked the family to spend part of the summer on Jura, first to Ardlussa and afterwards to Tarbert Lodge and The Glen, a small stone house built overlooking the beach of  Loch Tarbert  (a sea loch), with the Paps of Jura behind . Nancy and Waldorf loved The Glen where Nancy swam in the sea every morning and the children went shrimping .
. 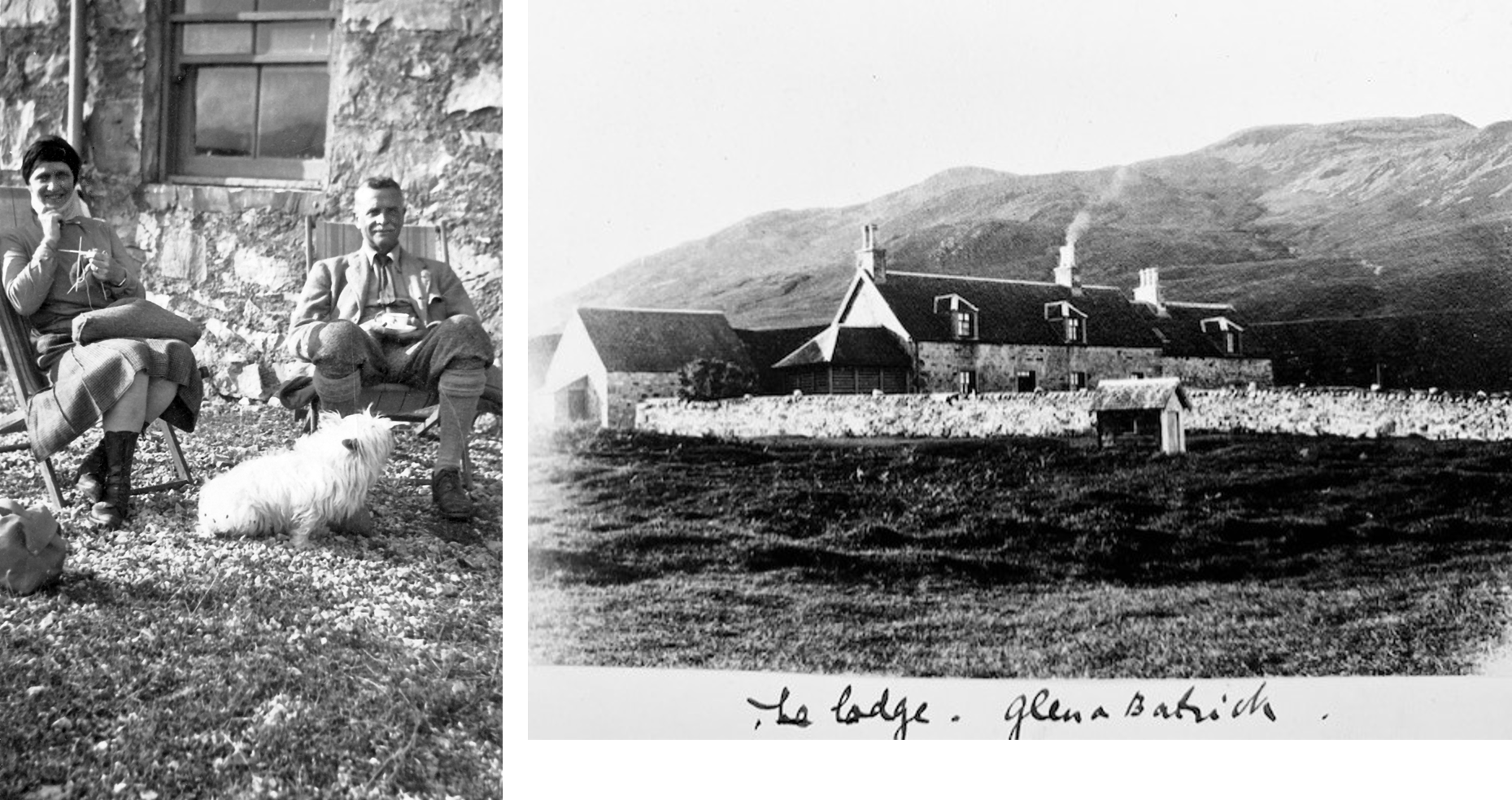 Nancy and Waldorf at The Glen
. 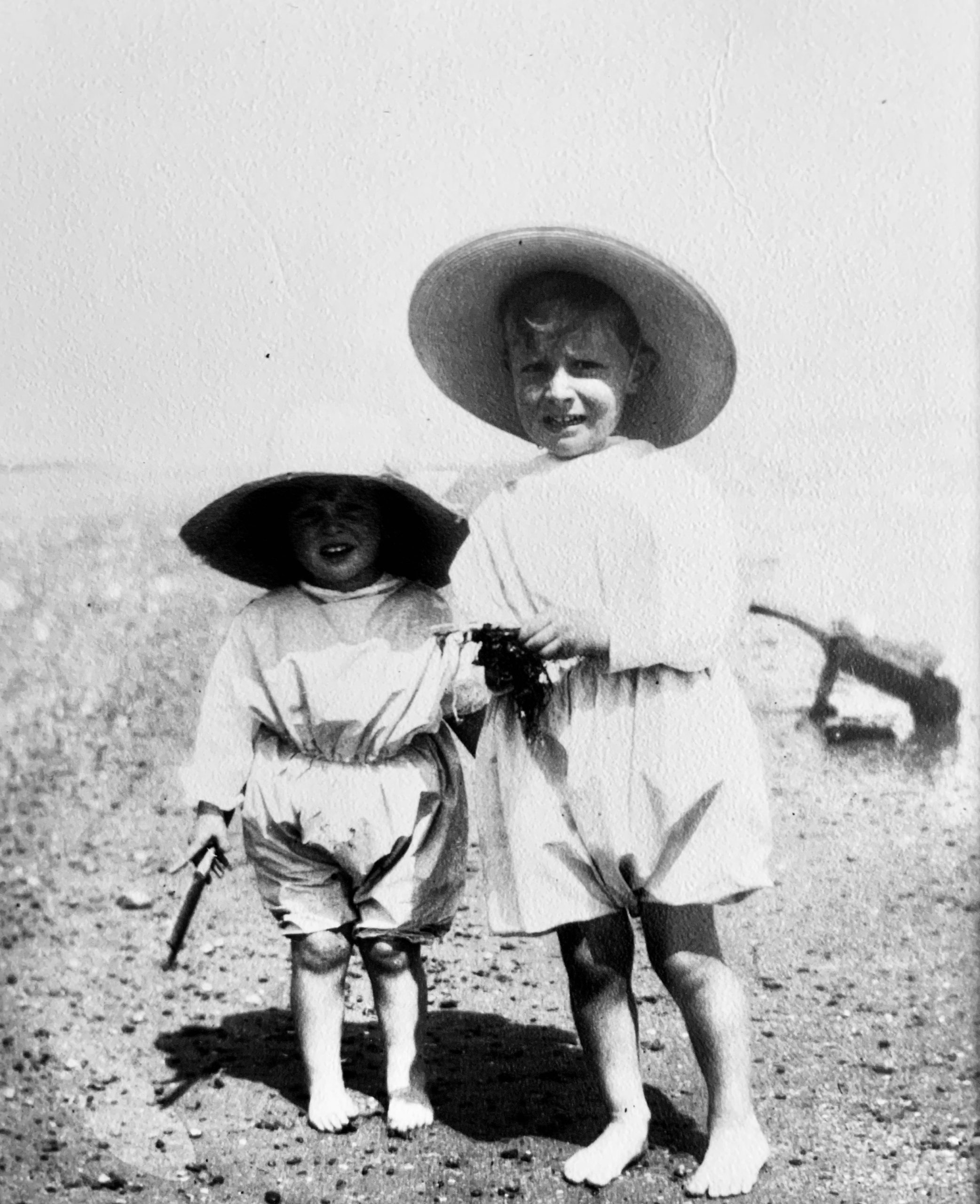 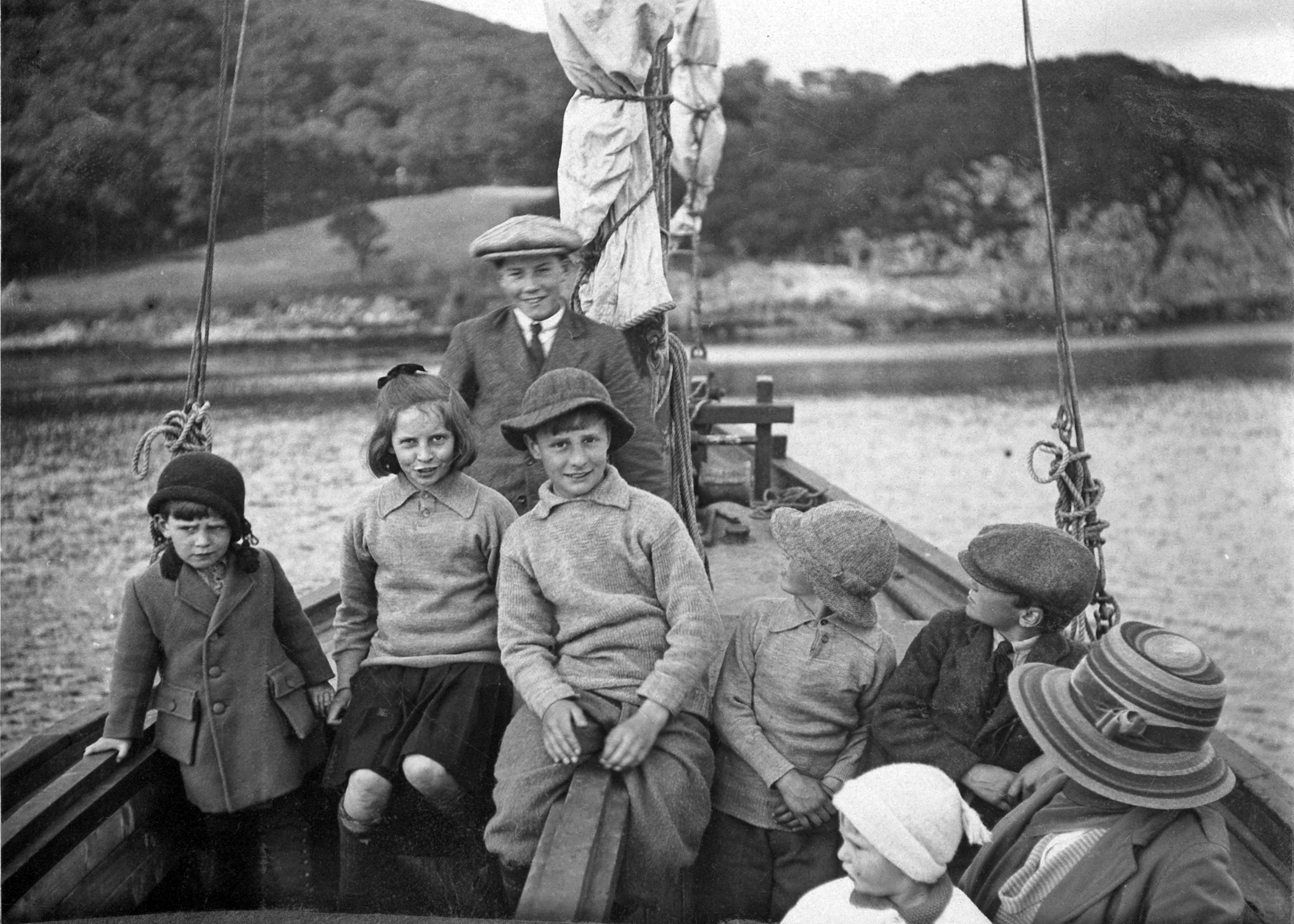 Sailing on Jura
.
At the north end of the island is Corryvreckan, the famous whirlpool that separates Jura and Scarba. Corryvreckan means ‘cauldron of the speckled seas’ in Gaelic. There are many local myths associated with the whirlpool, including that it is the place where the hag goddess of winter Cailleach Bheur washed her plaid ushering in the change of seasons between autumn and winter when clean white snow covers the island. In 1947 George Orwell nearly drowned here.
. 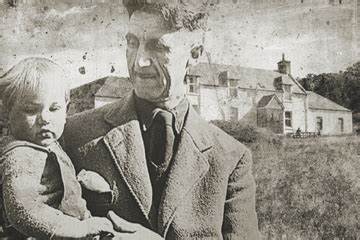 Orwell on Jura with his son Richard, circa 1947-48
.
How did Orwell come to be on Jura? David Astor (second son of Nancy and Waldorf) arranged for his good friend George Orwell to stay on Jura and arranged for him to live at Barnhill, the most remote part of the island, where he stayed intermittently between 1946 and 49. He was only known to the residents of Jura by his real name, Eric (Arthur) Blair and he finished writing Nineteen Eighty Four on the island between 1947-48.
.
Some of the earliest family memories are of deckchairs in the living room at Tarbert Lodge, the lighthouse perched on a rock across from the lodge where Nancy and Waldorf spent time reading and writing. As adults, their sons in particular, spent time painting and wiped their palate knives on a rock outside the door. At the Glen, there were only gas-lamps and no running water, water had to be pumped. The family often spent a day on the hill with a picnic, stopping off to fish on either the river or one of the many hill lochs.
. 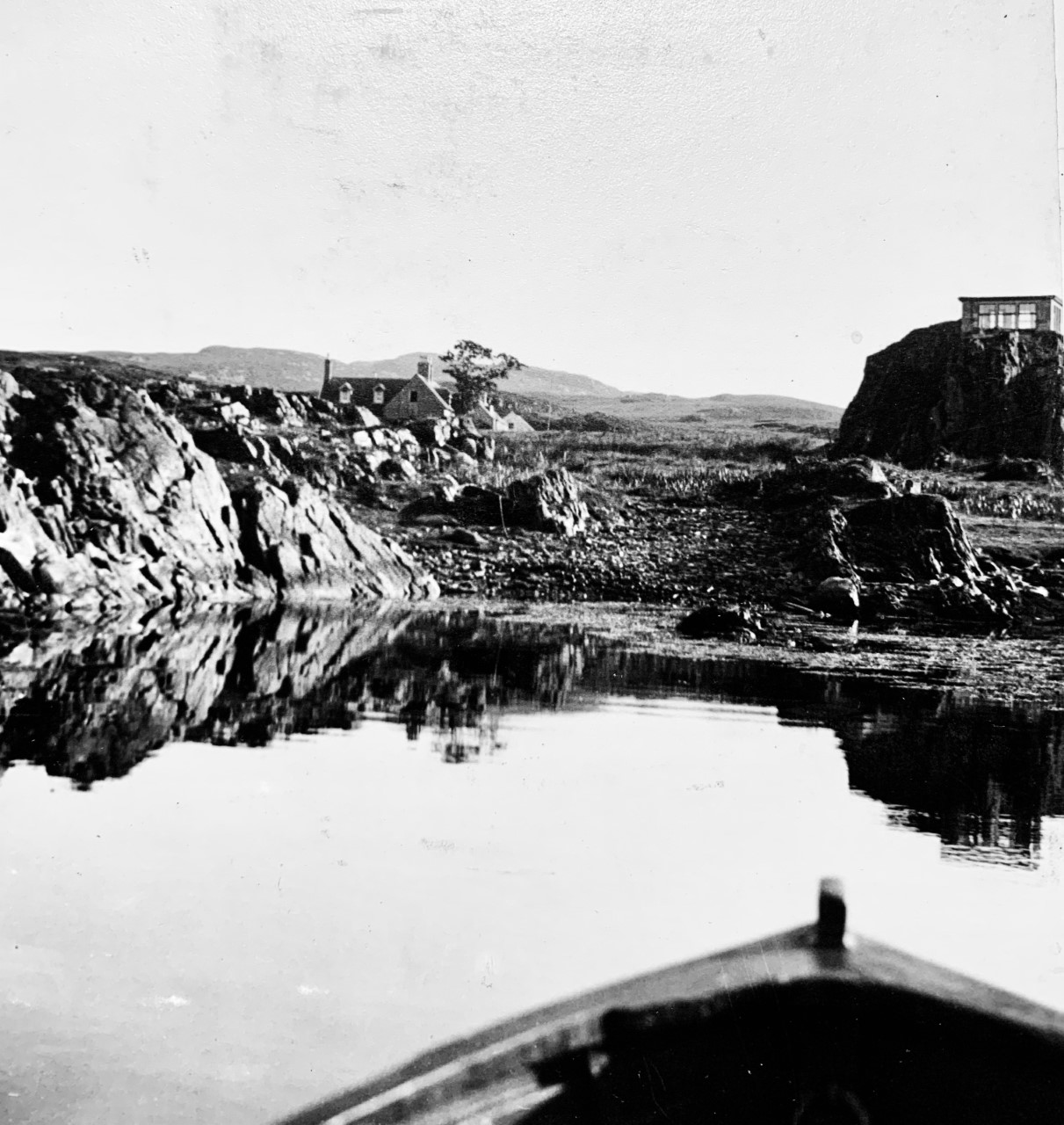 The lighthouse on Jura
. 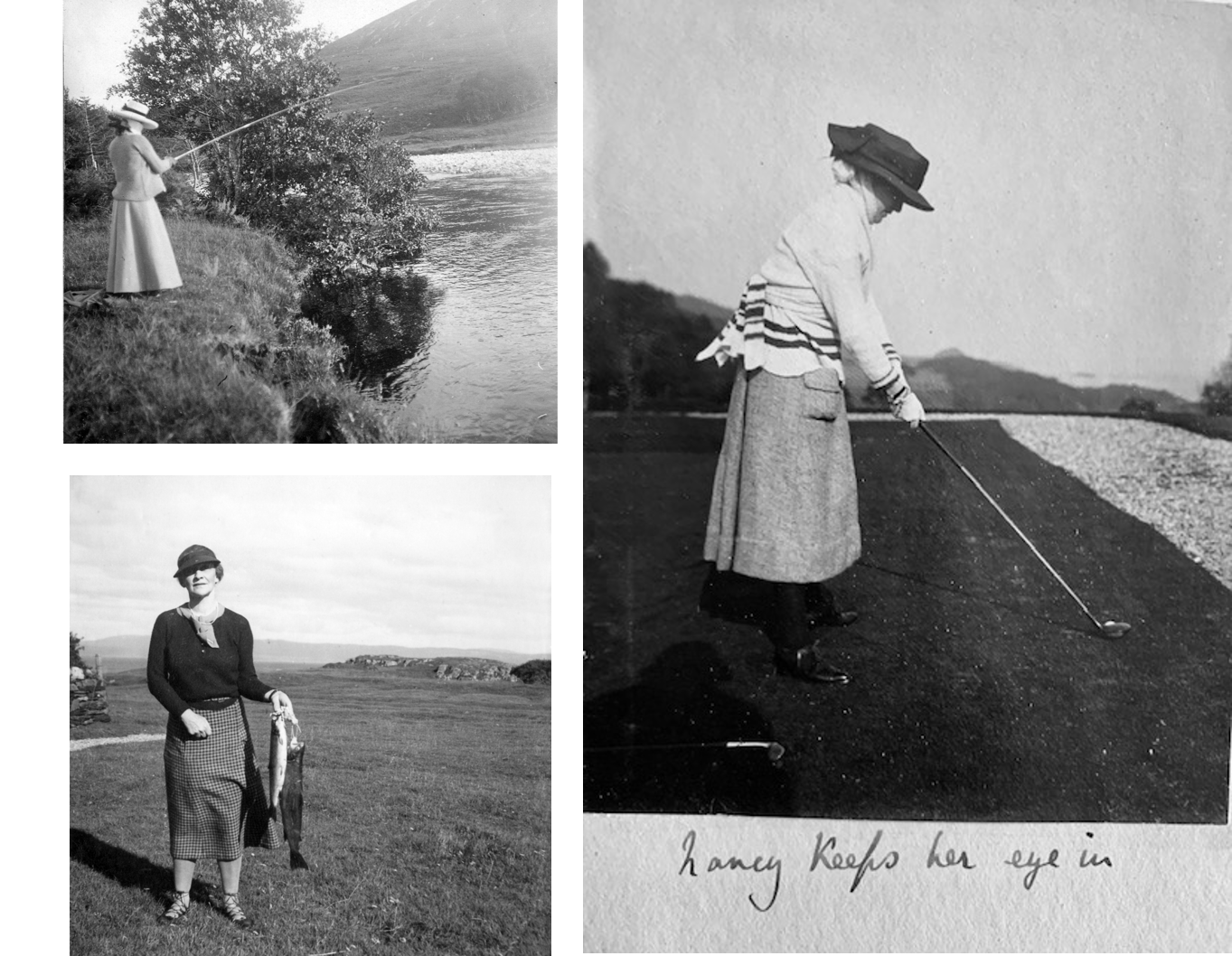 Nancy fishing and golfing
.
The centenary of Nancy’s election in 1919 and the centenary of women in Parliament coincides with 100 years of the Astor family on Jura.
. 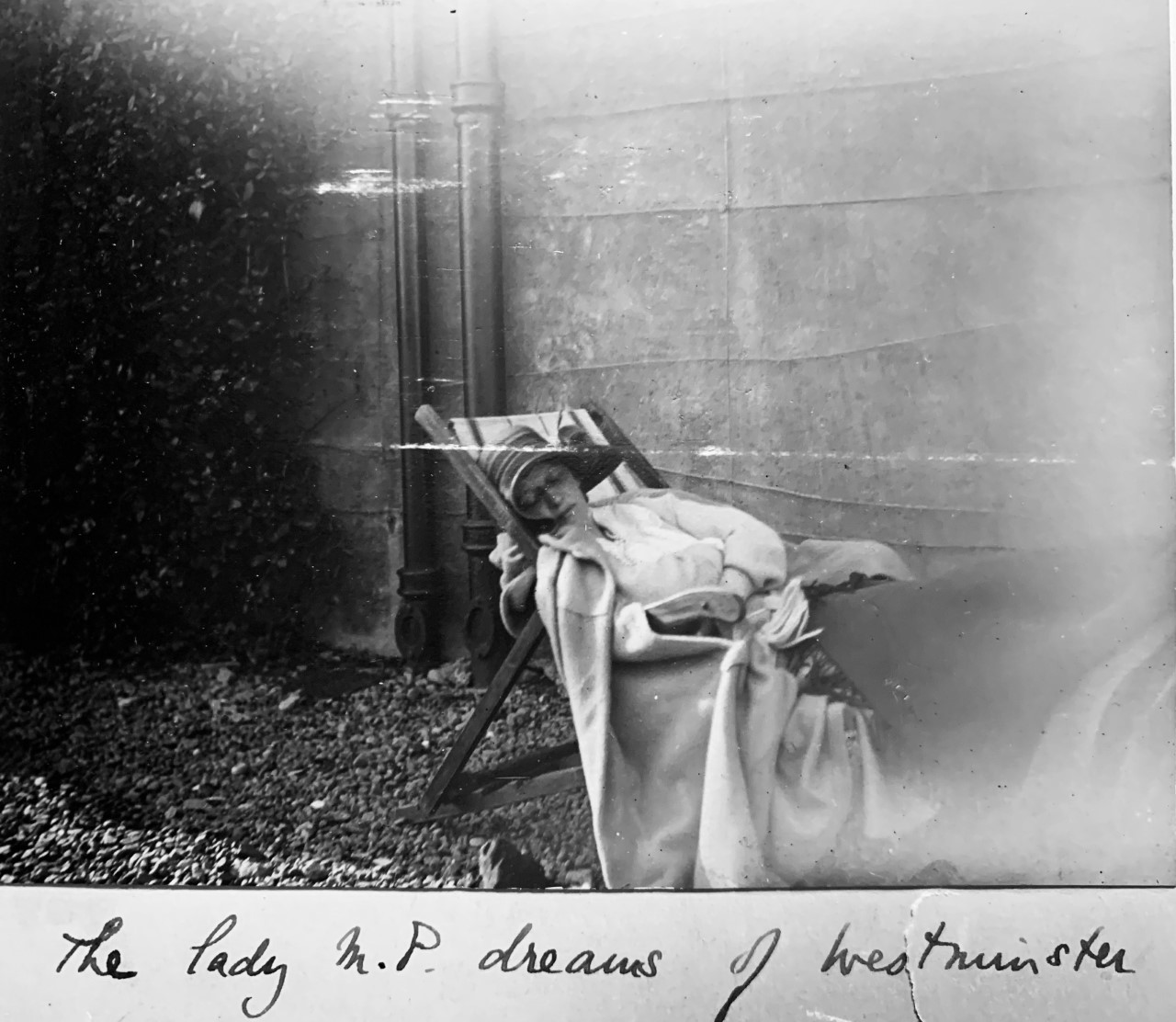 .
The Astor family, through Waldorf and Nancy’s  grandchildren and great-grandchildren, still have a home on Jura and a presence in Scotland. It is where some of their children were educated and where some still call home.
. 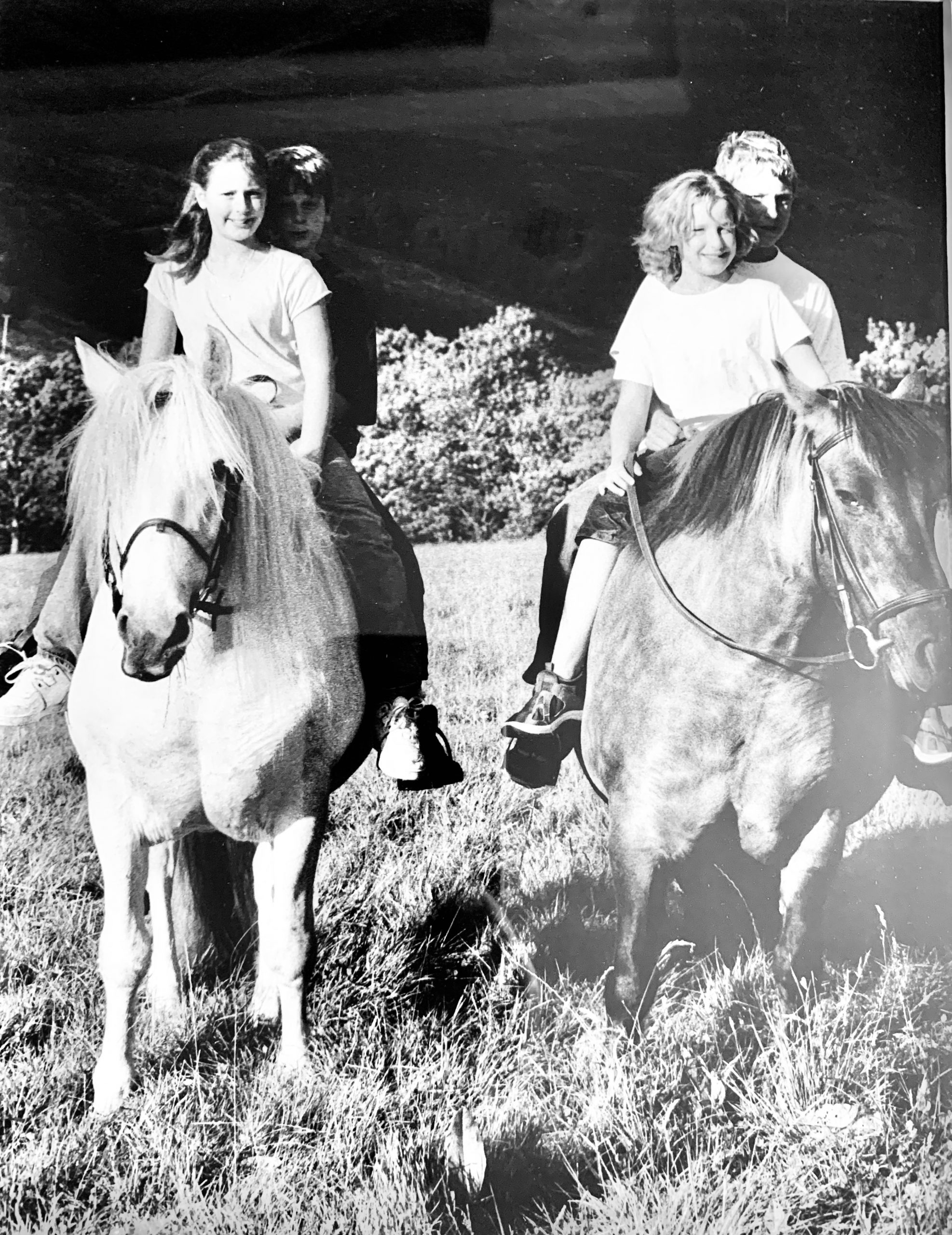 Nancy and Waldorf’s great-children riding in Scotland
.
All images (except Orwell) are from the Astor family private collection and are their copyright.
.
Emily Astor is a photographer, author and Nancy Astor’s granddaughter. She worked with John Grigg on his highly visual, informal biography of Astor and with a photographer’s eye has produced a personal collection of photographs for her current book ‘Nancy Astor: A Life in Photographs’ which can be purchased from the Museum of English Rural Life.  Emily was also the family consultant for the Nancy Astor statue, lending a personal eye to the sculpture and has generously supported the Astor100 programme in the UK and in Virginia.  She lives with her family in Perthshire.
.