This trilateral workshop between the UK, Uruguay, and Brazil brought together researchers from a wide range of disciplines including mathematicians, computer scientists, meteorologists, statisticians, biologists, geoscientists, oceanographers and physicists. Most attendees were early career researchers, and much of the workshop was spent in working groups with the aim of discussing future research topics concerning adaptation, mitigation and resilience in the context of climate change. Each group created a set of open problems suitable for future international collaborative projects on the timescale of 2-4 years.

Our working group title was Modeling and Computer Architecture. This broad topic allowed for both discussions of general areas of interest such as model reduction, and accounting for correlated correlation and model errors within a data assimilation framework, but also more specific problems relating to landslides and hydrology. These discussions were narrowed down into multiple project proposals, with open questions providing concrete suggestions for avenues of interest which will hopefully be taken forward.

As well as having the opportunity to discuss important research questions, finding out more about the specific issues faced in Brazil was extremely interesting. Our Brazilian hosts were very generous with their time, telling us all about the use of renewables, the impact of flooding in terms of disease and how landslide prediction needs are different to those in the USA and Europe. As conferences and papers can sometimes feel very Northern hemisphere dominated, it was valuable to get a perspective on NWP and climate challenges in the Southern hemisphere. 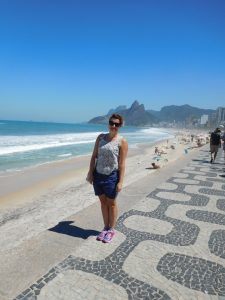 After the conference, a few of the UK party were lucky enough to spend a few days on holiday in Rio. This was a great way to round off our first trip to the Southern hemisphere and a week of great scientific and cultural discussion.