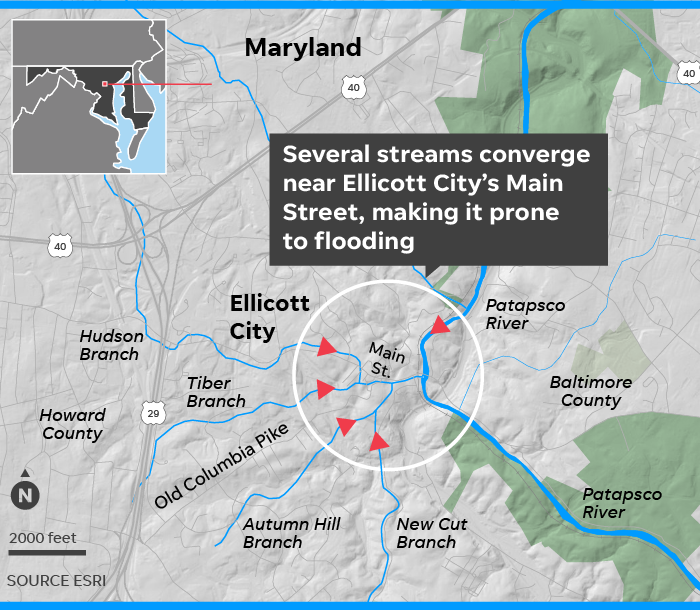 We have come across an illustrating source of a network of security cameras capturing a flash flood in Ellicott City, Maryland, US on Sunday 27th of May 2018. The video is a collage of 12 cameras all located on or near the Main Street in Ellicott City. The information from these videos would have been useful at the time of the flooding.

The videos clearly show how the Patapsco River and two out of its four tributaries (Tiber River and Hudson River) rapidly swell and overflow. We see how this results in the Main Street also becoming a fast flowing river with water washing away cars, destroying buildings, and accumulating debris. The flood lasted only four hours but caused catastrophic damage to local infrastructure, residents property, and claimed a life of a National Guardsman [1,4].

The cameras were installed by a local property owner, Ron Peters and can be seen in this YouTube video:

A storm released nearly two months of rain, over 9 inches (24cm) in just two hours (3 to 5pm local time), which swept away several roads, cars and brought more than 10 feet (3.0 m) of rapidly moving water down Main Street in the Old Ellicott City [1]. The old city is a very urban area set in a valley next to Patapsco River and its four tributaries. Due to the urban landscape the rainfall has nowhere to go except for running down the valley to the main river.

This was the second 1-in-1000 flood event within two years in Ellicott City. Both 2016 and 2018 events claimed lives and caused millions of dollars in damage [1,4]. However, flooding is nothing new to this city.  The city officials are looking into introducing green areas in the city to allow the rain water to be absorbed into the ground reducing the surface runoff.

Associate Professor Nirmalya Roy and his group from University of Maryland Baltimore County (UMBC) are working on using a network of temperature and liquid sensors and have produced a new flood warning system for Ellicott City [2,4]. They are also working on using the local flood related information from social media such as Twitter into the flood alter algorithm which warns public through loudspeakers in the city [3,4].

It is clear that the videos captured from these security cameras provide a rich source of water information of the rivers and the Main Street. Information such as water levels and surface velocities can be extracted from these videos [5] and used as part of an existing flood warning system or an independent one. Further, videos also capture additional information on floods and damage caused that is valuable to rescue teams, insurance companies etc.