Minghella Studios, 17th July 2019
With the our project now complete, the University of Reading hosted the final celebration of the AHRC-FAPESP funded IntermIdia Project. The event featured the screening of our brand-new feature-length documentary film Passages, an exhibition of our publications, as well as the screening of a series of wonderful video-essays produced by our research team. 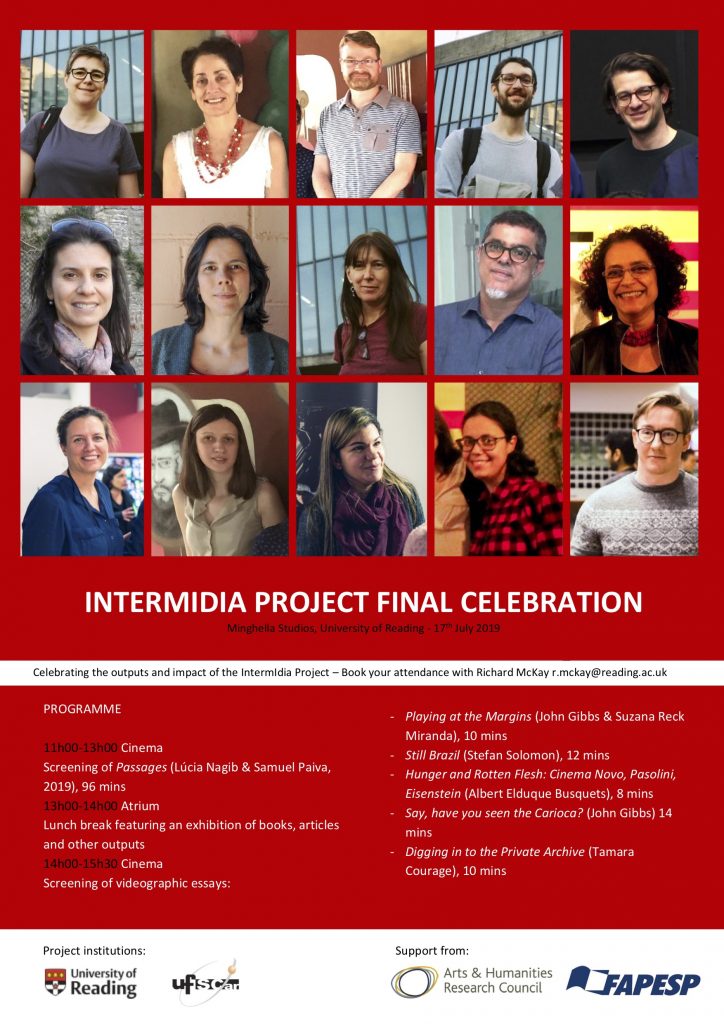 The Passages Promotional Video is now available to view below. Further updates to come.

The relationship between cinema and the real is probably the most central and complex issue in film studies. Passages attempts to address this issue by looking at a selection of films in which intermedial devices, that is, the utilisation within film of artforms such as painting, theatre, music, photography and others, appear to function as a ‘passage’ to political and social reality. In preparation for the film, we have interviewed 15 key Brazilian filmmakers, technicians and curators, all of whom are prominent figures of what became known as the Retomada do Cinema Brasileiro, or the Brazilian Film Revival, of the 1990s, which brought back to the agenda the question of national identity and Brazil’s lingering social issues. The flourishing and diversification of independent filmmaking from that period onwards favoured not only a new approach to reality, but an emboldened use of the film medium that acknowledged and exposed its inextricable connections with other art and medial forms. The Passages project proposes that the intermedial method is thus strategically poised to shed a new light on the ways in which these films not only represented but interfered with and transformed the world around them. The chosen case studies hail from Pernambuco, in the northeast of Brazil, and from São Paulo, in the southeast, whose filmmakers, though stemming from disparate regional cultures, have been in a close artistic dialogue since the Brazilian Film Revival, demonstrating their shared values at a certain historical juncture and interconnectedness across Brazilian geography.

With the Silent Movie Prologues from Brazil event now complete, see below for photos and videos of the event!

In March 2018, as a part of the course ‘Brazilian Music and Film’ at the Reading Film Theatre, students were asked to choose songs related to their own stories and use them to explore the intermedial relation between music and cinema.The models for this exercise were the films screened during the ‘Contemporary Brazilian Music Film Season’ at the RFT, most notably Eduardo Coutinho’s documentary feature ‘Songs’ (‘As Canções’, 2011). ´London Calling´, ´Postcards from Italy´and ‘Route 66’ were some of the tunes the students shared with the other people in the course. The following film, ‘Reading Songs’ by Albert Elduque Busquets, examines the student’s presentations.