Here is a selection of recent and upcoming outreach events to which members of the Meteorology Department contribute. (Back to Outreach Page)

29 October 2019 – Year 12/13 Meteorology Taster Day – an opportunity for A level students to visit the department and discover what study and work in this field could be like. Applications can be made via: https://www.reading.ac.uk/forms/crm/subjecttaster.aspx

30 April – The Royal Society Kavli Medal and Lecture 2018 delivered by Professor Ed Hawkins – Our changing climate: learning from the past to inform future choices. The Royal Society, London 6.30-7.30pm (free entry – doors open at 6pm – seating on a first-come basis, no registration required)

The long hot, dry summer of 2018 was a reminder that our society is vulnerable to unusual weather, through risks to human health, aging infrastructure, transport disruption and lower crop production. Such heatwaves are now hotter than in the past because the planet has warmed over the past century, largely due to human-caused emissions of greenhouse gases. Other consequences of a warming world include extreme rainfall events becoming more frequent and rising sea levels as the oceans expand and the glaciers melt.

This lecture will outline how our climate has already changed and how volunteer “citizen scientists” are helping us improve our understanding of extreme weather by recovering millions of lost historical weather observations that were taken over a century ago. Further changes to our weather and climate are inevitable, but it is our collective choices that will define what happens next.

6 March – Portcullis Trust, Richmond, is held a fundraising evening talk by Richard Allan on The Science of Climate Change

19-22 February – The Meteorology Department and Met Office Work Experience Programme – will give 36 x Year10-13 pupils from a range of schools an opportunity to find out what work, study and research is like within this field.

5 February – Maiden Erlegh Trust opened its doors to its largest careers fair to date. Javier Amezcua represented the department and drew in the pupils with thermal camera activities.

4 February – Find Your Future was a subject taster day for Year 9-10 pupils, the theme this time was Climate Change. Nicolas Bellouin demonstrated how infrared radiation depends on temperature

3 February – Steve Woolnough was a guest speaker at the Wiltshire Cricket Groundsman’s Association AGM, they are now better informed about recent climate conditions and forecasting.

27 November – The Flooding From Intense Rainfall Programme Open Event was held at The Royal Society in London. Professor Sarah Dance and Professor Hannah Cloke and their project teams showcased the work of this five year project to around 150 guests including stakeholders, interest groups, representatives from flood prone areas, town councils and parliament.

25 July – The Jenner Museum in Berkeley, Gloucestershire, hosted an evening public lecture on Lightning given by Professor Giles Harrison

18 July – Matthew Couldrey gave an overview of climate change and sea level rise to the guides at The Living Rainforest, nr Newbury

8 July – The Worshipful Company of Scientific Instrument Makers enjoyed a lecture on the history of the Stevenson screen, given by Stephen Burt

20 June – The Meteorology Department hosted 60 Year 9/10 children from 5 schools from the South East for a Meteorology Taster Day, How do we predict the weather? (see also review by Abingdon school)

9 June – A lab workshop session was given by Javier Amezcua at the 2018 Open Day of the National Oceanography Centre, Southampton. There were around 5000 NCEO attendees from Surrey and Leicester

3 June – Big Band Big Lunch: Met staff engaged with young members of the public at this University event that included activities such as clouds in a bottle and drawing the weather 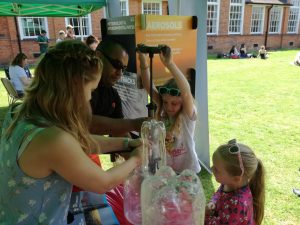 25 May – Javier Amezcua and Lee Hawkness-Smith joined the Science Spectacular at Southcote Primary School. Their activities involved giant bubbles and saving an egg with a parachute.

23 May – Virtual Open Day: Richard Allan presented a live online talk about Meteorology and Climate Change to Year 10 students across the country

26 March – Talk on ‘Climate Change: What we know and how we know it’ given by Bill Collins at U3A

17 January – The University of Reading and Richard Allan delivered The Science of Climate Change Workshop to 90 Year 9 pupils.

The Met department contributed to this exhibition exploring the science and technology of “twisty-turny stuff” in, on, above and beside Reading’s rivers. Thermals, eddies, tornadoes, waterwheels, millstones, spirogyra, DNA, twisting plants, spinning and turbines have all affected Reading, its river dwellers, monks and red-kites one way or another!

14 June – Codefest 2017 at Caversham Primary School. Hilary Weller helped Year 6s to use coding and maths to forecast how long it will take for rain to arrive

14 June – How do we predict the weather? The department hosted around 40 pupils from regional schools for a day of observing, understanding and predicting the weather

Javier Amezcua contributed to this Maths-fest with topics includding cops and robbers on graphs, polymer maths, from crime scene to court, forecast factory, and infectious disease!

October 2016 – NERC In To The Blue event in Manchester

Department members including Claire MacIntosh, Jan Fillingham, Javier Amezcua, Till Kuhlbrodt and Andy Turner, through NCEO and NCAS, helped inspire thousands of visitors by bringing alive the world of environmental science and research

Richard Allan talked about our Environmental Physics and Meteorology degrees

Peter Cook is presented a talk as part of Christians in Science at Bill’s Restaurant in Reading town centre. Registration now closed.

Charles Williams and Adrian Champion discuss the basics of the climate system, how it has varied in the past and how it will change in the future and consequently impact society

Giles Harrison was the invited speaker at the Institution of Engineering and Technology (IET)regional evening meeting in Newport, Isle of White

13 February to 9 May 2016 – John Constable: Observing the Weather exhibition

Stephen Burt was involved in advising upon, curation and photography for the exhibition ‘John Constable: Observing the Weather’ at The Lightbox gallery in Woking. John Constable was greatly influenced by early meteorological science, particularly Luke Howard’s work on cloud nomenclature and taxonomy, and the exhibition includes early meteorological texts and weather diaries including Howard’s own MS diaries and published volumes from the Royal Meteorological Society’s archives. The University and the Department of Meteorology is credited.

Stephen Burt and Roger Brugge presented to a packed audience at the Palmer Building in the University of Reading about Reading’s weather history using meteorological measurements from the University and a combination of archived logbooks, contemporary photographs and today’s sophisticated automatic weather observations

The department hosted around 70 pupils from local schools for a day of observing, understanding and predicting the weather

November 23rd 2015 – The World of Physics event at the University

School Physicist of the Year event at the University

On Friday 20 March 2015 there was a rare near-total solar eclipse visible from the UK. The Department of Meteorology ran activities for local schools to help them learn more about the science and folklore behind this natural phenomenon, and the weather changes that may accompany it.

18 March 2015 – The weather at war: public lecture by Andrew Charlton-Perez

17 March 2015 – We contributed to the Pangbourne and Whitchurch Sustainability Group climate change workshop at Bradfield College.

Together with the Met Office, and the European Centre for Medium Range Weather Forecasts, we have developed a three day programme to provide first-hand experience of working and studying in meteorology and environmental physics.

Claire Barber ran an observations-themed stand with contributions from the RMetS as part of the Bright Sparks Saturday event.

29th January 2015 – Rob Thompson talked to St. Mary and All Saints Primary about the weather

10 December 2014 – Sue Grimmond talked about her work to more than 100 15 year-old students at the South-West Weiyu Middle School in Shanghai, China.

12 November 2014 – “Extreme weather and climate change: Should we blame ourselves?”

7 October 2014 – “Extreme weather and climate change: Should we blame ourselves?”

A visit from a group of retired Scientists and Engineers for a series of mini presentations on weather and climate research and a tour of the atmospheric observatory.

Richard Allan provided a presentation for the Highworth PROBUS club

Over 30 school pupils attended our annual Meteorology activities day which included a weather balloon launch, tour of the field site, experiments in the fluids laboratory, using hand held instruments and becoming part of a human computer to forecast the weather.

Stephen Belcher joined a Panel Discussion at the British Library

May 31st 2014 – Feel the Force: Hurricanes and other Hazards

Ray Bell helped kick off the start of hurricane season by contributing to a public event aimed at providing engaging science activities and safety tips from the experts.

6th May 2014 – Visit from the Earl and Countess of Wessex

2nd May 2014 – Chris Scott talked to the Newbury Astronomical Society

26 February 2014 – Weather activities with the Hanborough and Freeland Cubs

Graeme Marlton talked about what drives weather systems and provided hands-on activities to help cubs work towards their meteorological badge.

Richard Allan talked about the weather to Year 3 who attempted to blow as fast as Usain Bolt, create a “tornado” in a bottle and learned about thunderstorms and hurricanes.

Roger Brugge compares climate and weather between the UK and Spain for Key Stage 2.

Giles Harrison led a band of intrepid researchers to talk to the aviation industry.

School students and teachers from around Berkshire participated in a mini-symposium covering the latest weather and climate research conducted in the department and at MetOffice@Reading presented by Nigel Roberts, Richard Allan (see talk), Oscar Martinez-Alvarado and Michel Tsamados and careers advice from Carol Halliwell and Dawn Turner. 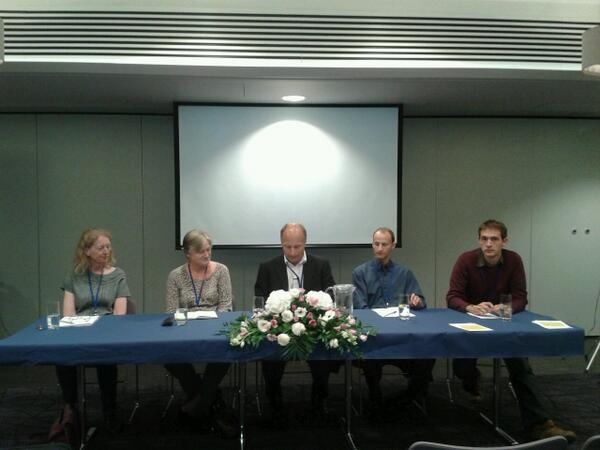 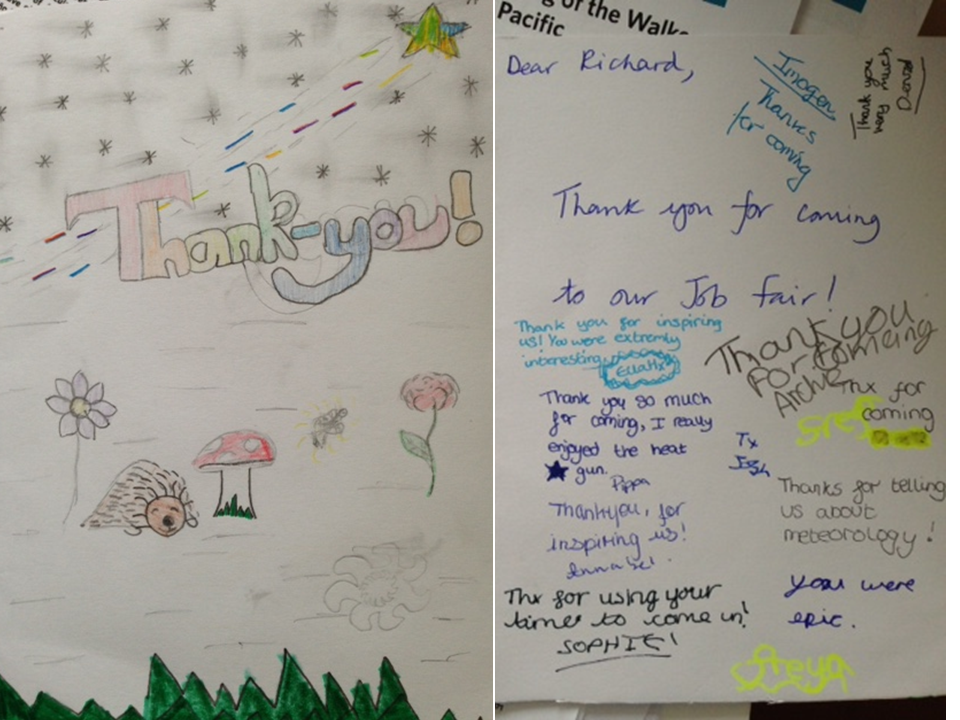 Richard Allan talked with around 50 Year 6 pupils at Caverhsam Primary school about what inspired him to learn about Meteorology and Climate Change and his career as a University Lecturer.

28 June 2013 – Re-opening of the Atmospheric Observatory

The Meteorology Department recently celebrated the complete refurbishment of the Atmospheric Observatory site and buildings which are used extensively in teaching and outreach (more…).

Richard Allan talked on “Weird weather: Is this the new normal?” and Michel Tsamados is discussed “The Melting Arctic” at the Confronting the Climate Crisis Conference in London

Schools from around the South East converged upon Reading to learn about how weather forecasts are made in a hands-on activity packed day. This included a tour of the field site, a radiosonde balloon launch (see also the raw data (4MB) and slides), performing experiments with density current and rotating tanks, using hand-held meteorological instruments and becoming a human computer to forecast the weather. The Met Office provided a latest weather forecast which was, unfortunately, dreadful (in terms of the cold, wet and windy conditions on the horizon that is)!

Sian Lane attended a session with teaching staff dealing with how to teach Physics effectively.

Claire Barber and other members of the department and NCEO attended the UK Space Agency stand at the Big Bang Science Fair in London. The aim was to explain about the uses of satellite technology in monitoring and learning about our Earth (photo courtesy of the UK Space Agency).

Dawn Turner coordinated the 2013 Work Experience programme for 32 participants who took meteorological measurements, including a tour of the Met Observatory and a weather balloon launch, became a weather forecast computer with help from the Met Office, toured the European Centre for Medium-range Weather Forecasts, conducted physics experiments and engaged in Weather and Climate Discussions.

Giles Harrison presented an evening lecture to the Astronomical Society at Cambridge University. 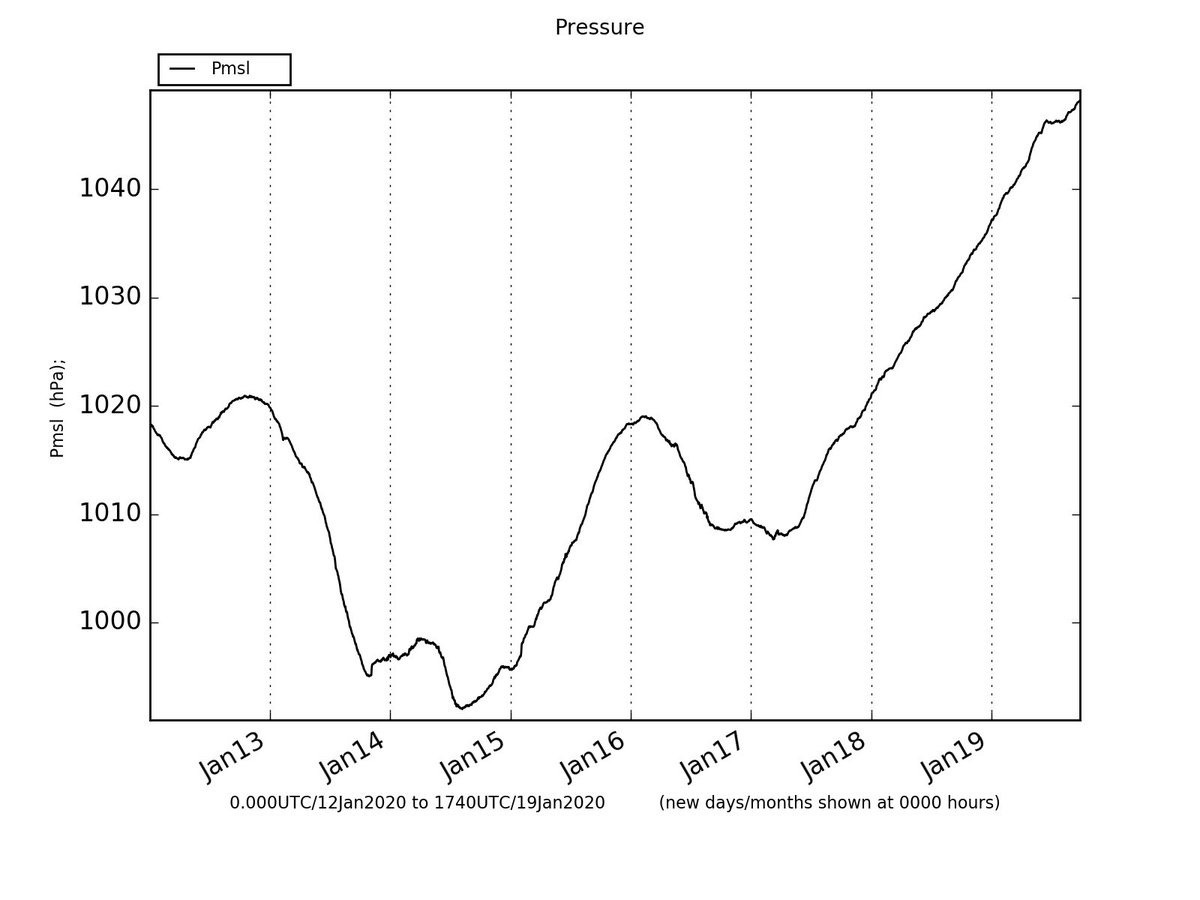 @JacquelynGill I found Kinder Surprise @SurpriseEgg capsules rather useful for weather balloon sensors going up to 20km. Paper at: https://t.co/GGZZLflcvy, with footnote “The outer chocolate enclosure and foil coating must first be removed”. Many, many colleagues at @UniRdg_Met helped. https://t.co/8awtNRJemf 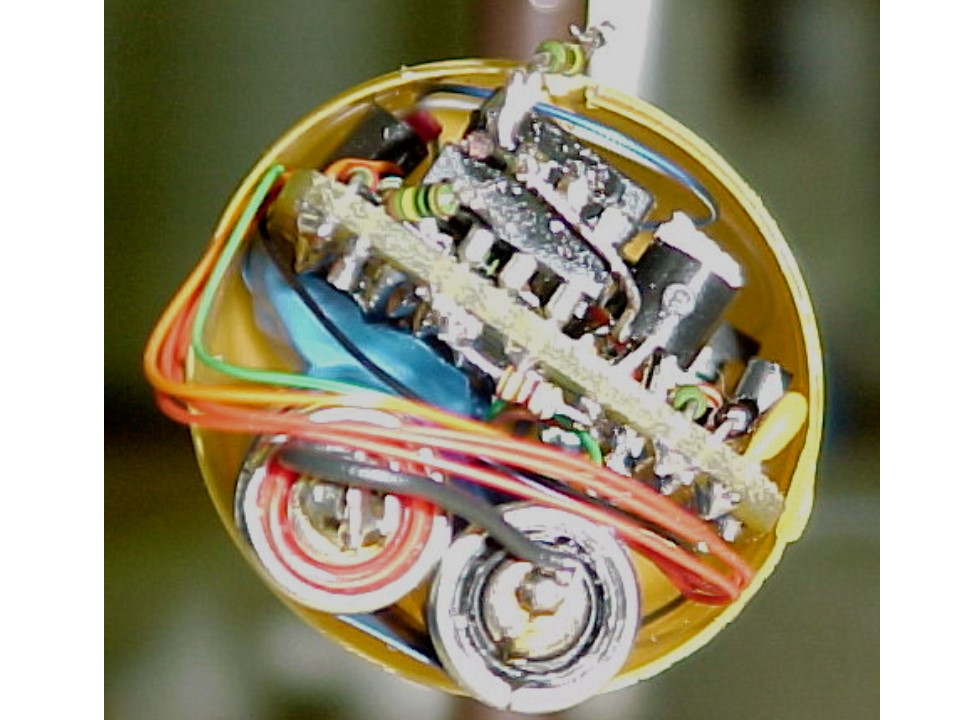 “Worried but optimistic” about the future – @DrElisabethT discusses climate change on @BBCNews last night and the fact every month of her entire lifetime has been warmer than the long-term average #OurPlanetMatters https://t.co/w8lPQqm3gy 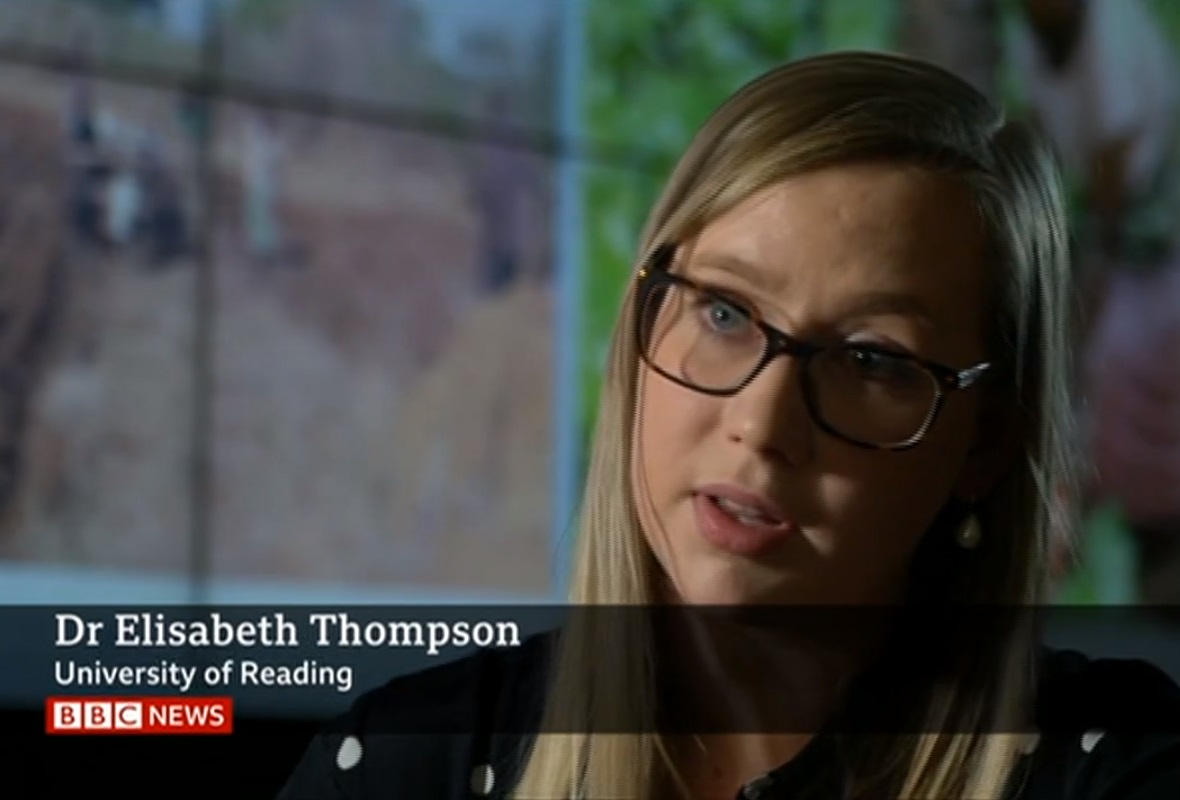