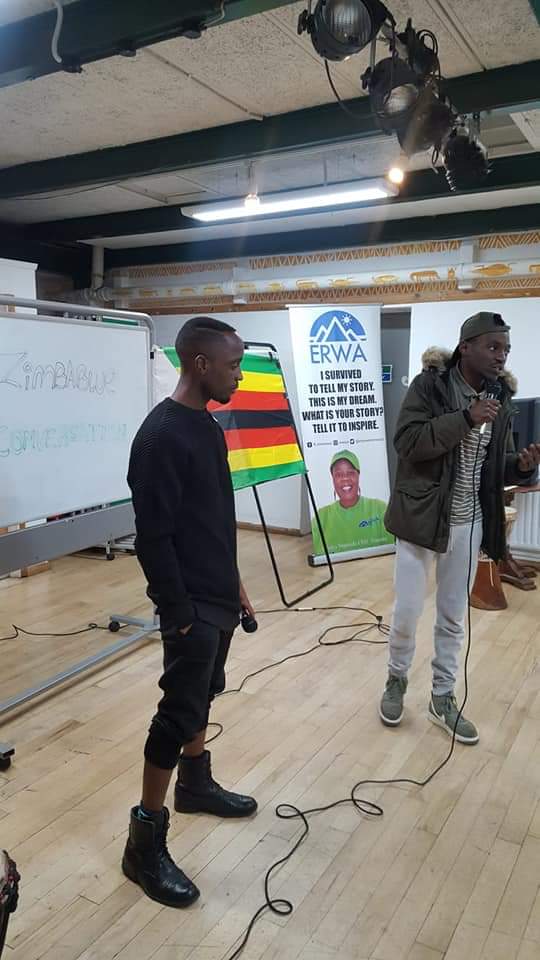 I have been involved in local community work with refugee and diaspora groups for many years and co-organised an event for people of Zimbabwean heritage in Reading during the UK’s annual Black History Month in October 2018. Zimbabwe has a diaspora of approximately 4 million people who have migrated to different parts of the world, and an estimated 200,000 Zimbabweans living in the UK (Pasura 2011).  Slightly higher proportions of people born in Zimbabwe are residents in Reading compared to in England and Wales as a whole;  the Zimbabwean-born population comprises 0.5% of the population of 155,700 residents of Reading (ONS 2011). People of  Zimbabwean heritage living in Reading were invited to a participatory discussion as part of the Reading International Festival and the  Black History Month – ‘The World is Changing Are We?’ (2018). Members of the community showed great willingness to participate and led the discussions.

Through my doctoral research, I have been drawing on Participatory Action Research (PAR) methodologies which emphasise participation and action. Reason and Bradbury (2006) suggest that research that involves participation may generate knowledge that serves a worthwhile human purpose and develops practical knowledge. Facilitating community development through alternative research methods, Kindon et al. (2007) view the impact of action in PAR as a process of conscientization of participants. I drew on these tenets for this Zimbabwean diaspora event and prompted the participants to come up with actions resulting from each group’s discussions which were led by those who participated.

Three different groups emerged for discussion:  i) history/ politics/ economics; ii) young people of Zimbabwean heritage; iii) community engagement groups. Beth Rabisz, a PhD gave a presentation on behalf of Dr Heike Schimidt, academic in the History department at the University of Reading, whose research focuses on Zimbabwe. A young Member of Parliament for the opposition party in Zimbabwe, Happymore Bvindi, who was visiting the UK at the time, was invited  to come to the event by one of the participants and gave a talk about, ‘What happened and the question of young people’s participation in politics.’  The economics group chose to discuss ‘Gross Domestic Product (GDP) and human security in Zimbabwe’ which is currently a topic of contention in Zimbabwe due to human rights abuses, financial insecurity and issues surrounding the protection of property rights, including bank savings and material assets. The young people who participated were from diverse backgrounds and included university students, sports personalities and MadeInZwe, an organisation of young people who express th treaty themselves through creative arts, music and drama. The community engagement discussion group comprised church leaders, nurses, and members of a women’s bereavement group.  Members of community groups were concerned about how the Zimbabwean diaspora was responding to migration to the UK. 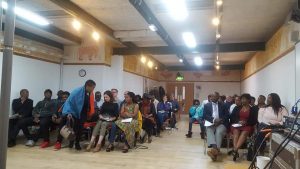 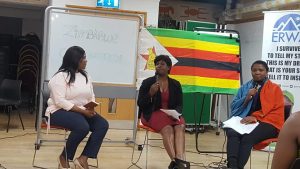 During the preparation for the event, there was much enthusiasm about the discussions and many people wanted to speak on different topics.  The different groups designed the framework, and the discussion topics showed that when people are validated and acknowledged, they can contribute effectively to debating and tackling community problems that affect them.

The young people spoke passionately about different issues that affect them as members of the Zimbabwean diaspora.  They questioned their identity, as they struggled with intergenerational tensions regarding reconciling cultural expectations from their parents with ‘Western’ values and ideologies in the UK. They felt that there was a sense of community and respect for each other in Zimbabwe, something that those that had been born there missed when living in the UK. Students felt a sense of ‘invalidation’ (not being valued) as black students at Universities, which affected their aspirations and, assimilation,  struggling to reconcile how sometimes culture, language and racism could make them question their identity. MadeInZwe young artists have engaged with the diaspora-development nexus through music by trying to raise money for young people’s education and sanitary products for girls in Zimbabwe. These young people link with Zimbabwean charities in the UK and organisations based in Zimbabwe, making transnational activities possible. The discussions on health and well-being were led by a young sports personality who spoke about how sports had helped him with weight loss, mental wellbeing and his concentration in spaces were young black men struggle with identity and social pressures to ‘fit in’ in the UK. He encouraged other young people to find a sport that they can pursue to be able to maintain good physical and mental wellbeing. The young people acknowledged that there were considerable mental health problems among their peers in the young Zimbabwean diaspora.

The young people felt that although they lived in the UK, they still faced challenges and considered Zimbabwe as ‘home’, often because they had faced racial hostility in the UK.  They felt that most of the time, their aspirations were overlooked, leading to them having to work twice as hard as their white peers to demonstrate their talents and abilities.  The MadeInZwe young people have found a way of expressing themselves through music, drama, comedy and art, drawing on their Zimbabwean cultural heritage.  They talked about how they create space on the internet to help children in Zimbabwe with school materials and girls with sanitary pads through on-line donations. What made this very poignant was that young men were concerned about the lack of affordability of sanitary pads for girls in Zimbabwe.  They sought to educate the community about what they do and made a music video called ‘MadeinZwe’ in which the Zimbabwean flag is a symbol of identity and language.  They also regularly organise online participatory discussions with young Zimbabweans in the diaspora, choosing topics that are meaningful to them.

The history/politics/economics group debated the current political and economic climate in Zimbabwe and felt that diaspora communities were rarely considered in Zimbabwe. Other African countries have started to recognise the contribution of their diaspora communities globally, like Ghana, through enhanced engagement in governance and economic development. People in the audience felt that the current government’s response to the broader diaspora is essential to the future development and political progression of the country.  They argued that the Zimbabwe government treated the diaspora as an ‘enemy’, despite their contribution through remittances to the economic, development and poverty alleviation within families.

One of the topics discussed by the community engagement group was a perceived increase in marriage breakdown, domestic abuse and children taken into care in the UK. There was also concern from parents about young people misusing drugs, and some were struggling with their mental health, which regarded as mainly due to migration. Men in the audience perceived that their masculinity and other cultural norms, traditions and values could erode through life in the diaspora. They were used to having higher paid jobs in Zimbabwe and culturally, they were considered  ‘head of the house’, a theme that was also raised by the religious group. Women felt that they now had to juggle childcare, working, studying and caring for family members much more than they used to in Zimbabwe, including working unsociable hours. They were also managing extended families ‘back home’ in Zimbabwe and also fulfilling marital duties with very little support. At ‘home’, they felt that they could afford to have a domestic helper or family members help with childcare, in contrast to the UK.

The women from the bereavement group spoke about how the UK can be a lonely place and that loneliness increases following a family member’s death. Asylum seekers and refugees were considered the worst affected, as often they could not go back to Zimbabwe to bury their loved ones. Also, if there was death in the UK, families were often unable to afford burial costs or even have someone from their community available to prepare the burial and funeral.

During this event, participants were open and sincere, valuing people’s contributions and listening to each other about potential solutions to the challenges they identified.  All the participants agreed that it was essential to renew the Zimbabwe Community Group in Reading and start a Zimbabwe Women’s Group in Reading in order to navigate issues together, support each other as members of diaspora communities and engage with the local community more broadly. The music video clip made during the event by MadeInZwe will help to raise funds for school children in Zimbabwe.

This event and the discussions that took place have helped to shape the community and demonstrate how active participation and action to tackle community issues can help to explore self-identity and belonging among diaspora groups.  Young people were able to challenge stereotypes in an open forum and to come up with community solutions themselves to improve their wellbeing and that of others. After this event, the Zimbabwe community group came together and helped the victims of the cyclone Idai with other local people, raised money through musical events around Reading and now have an active community group. The event demonstrated the need to give a platform and a voice to diaspora communities so that they are enabled to find their solutions to concerns they face. It raises critical questions about collectiveness and the challenges to identity in diaspora communities. 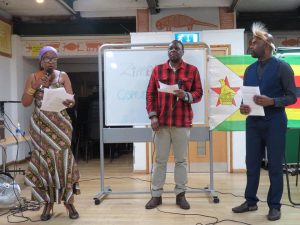 Bloch, A., 2005. The development potential of Zimbabweans in the diaspora: A survey of Zimbabweans living in the UK and South Africa (No. 17). United Nations Pubns.