As ‘Movember’ draws to a close, Business Historian Dr Lucy Newton explores the history of facial hair in the workplace, from ‘peak beard’ in the 1850s to today’s hipster handlebars, in a new post for The Conversation. 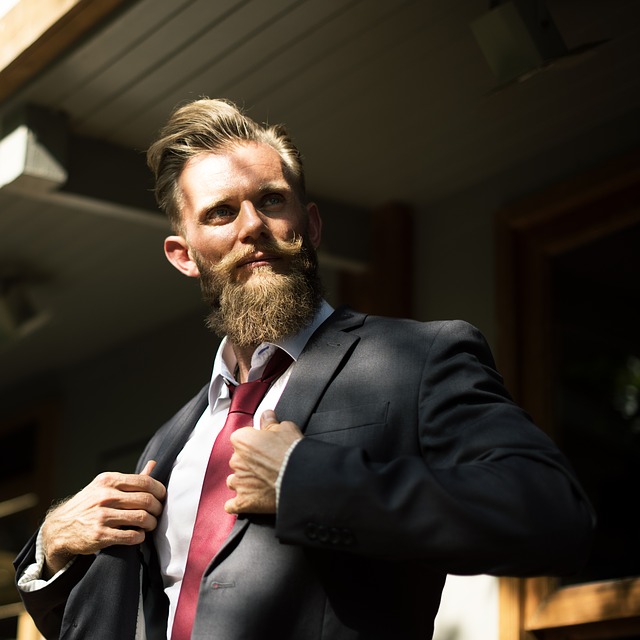 Recording the human face in art is a long-held tradition, from the Roman Bust to the 15th century Dutch painting. The portrait signals power, prestige and wealth. Corporations have also used portraits to depict their leaders. For example, UK retail banks have been collecting images of their founders and chairmen since the 18th century. These paintings remain on proud display in London head offices.

For a company, the portrait provides a public face and identity to an impersonal institution. But portraits can also reveal interesting trends and attitudes towards appearances. Research I carried out on portraits with my colleague Victoria Barnes revealed some interesting results.

One article published in the journal Enterprise and Society analysed the commissioning of bank managers portraits in the early 19th century. The research showed that, from a very early stage, newly formed joint-stock banks realised the value of such art works and used them to successful create a corporate identity and signal their place in the market.

Another article, published in the Journal of Management and Organisational History, examined how Lloyds Bank began collecting portraits of past bank chairmen in the 1960s and put them on display in their head offices. One thing that stood out to us in this research is the changing patterns in men’s facial whiskers over the decades. Recent fashion has embraced all forms of facial hair, but it has not always been so well accepted.

Ancient Egyptians believed shaving was associated with cleanliness. Greeks were proud of their beards, which symbolised authority and wisdom. Roman whiskers tended to be less luxurious and neater, while Vikings sported large beards and moustaches, their fearsome appearance adding to their formidable reputation in combat. Conversely, later armies often discouraged facial hair as beards could be seized in battle by the enemy to incapacitate a soldier.

Beards thrived in the UK in the Medieval and Tudor periods. Most of Elizabeth I’s key advisers have beards in their portraits. Charles I (1600-1649) famously sported a small and neatly trimmed beard, combined with a moustache. His whiskers may have been famed but they did not prevent his execution. Then, the late 17th and 18th century witnessed the return of the clean shave in Europe, providing abundant work for barbers.

In the early 19th century, beards returned with a flourish. But they were associated with left-wing, anti-capitalist revolutionaries. Just picture Karl Marx.

Fashions changed again from the 1850s. As revolutions across Europe were extinguished, in Britain the Victorians enthusiastically embraced beards and muttonchops – big long side burns that connect with a moustache. For them, the beard signaled power, masculinity and status. This was an age when British trade, commerce and industry were in the ascendance. Masculinity was therefore on display during a period of supreme confidence and economic success. This really was a time of “peak beard”.

Within companies, the beard has a mixed history, usually depending on contemporary fashions. From 1850 to 1900, British businessmen usually had some form of facial hair. Visit the halls of many UK institutions with a history back to the 19th century and you’ll see a line of portraits of men with beards.

The Edwardians at the turn of the 20th century, in contrast, rejected the full facial hair of their forebears and adopted the moustache. At a practical level, those fighting in World War I shaved off their beards to ensure their gas masks fitted properly. But they often retained their moustaches. The preference for a smooth shave with only a moustache followed thereafter during a period of mixed economic fortunes for British business, interrupted by two world wars and disrupted by the loss of Empire.

As successive generations attempted to move away from the one before them, the beard found favour again in the hippy-influenced 1960s and 1970s. The Beatles led this trend. Facial hair fell out of fashion in the 1980s and 1990s, when trustworthiness in business was signalled by a clean shave. Indeed, companies such as HSBC even had a “clean shave” policy at this time, according to archivists I’ve spoken to there. This was an era of Margaret Thatcher, Ronald Reagan and free-market capitalism. And, of course, more women were visible in both politics and business.

Reflecting the face of corporations, company portraits reflect trends in the appearance of businessmen and women. More recently they also reflect changes in the way that companies project their identity. They are no longer merely a procession of middle-aged, white, senior male managers with beards, as seen in the portraits of 19th-century bankers. Banks now display images that are more diverse – of people from various levels of the company, of women and different ethnicities. Thus, the company portrait survives but reflects progression in the society in which it is embedded.

Changing fashions in facial hair also opens opportunities for business. Barbers’ services and beard products allow men to groom in style. This reinforces the growing trend for men to spend more time and money on their appearance, a trend which shows no sign of abating. A growing popularity of beards is, obviously, less good for those producing razors.

Facial hair has traditionally signalled masculinity. As 21st-century businesses are, of course, gender diverse, facial hair will never be the essential work accessory, but rather a style choice and positive vehicle for charity fundraising through initiatives including Movemberand Decembeard.

After recent research in the Journal of Evolutionary Biology found that all women questioned preferred men with facial hair, there may be more than just a business case for men to keep their whiskers. Whatever the motivation for hair growth, it looks like the beard will always be with us.

Dr Lucy Newton is Associate Professor of Business History at Henley Business School. Lucy’s current research interests include the regulation of 19th century British joint-stock banks and the creation of an identity around these new entrants to the market.