On 6th February 2018, the UK celebrated 100 years since some women and all men were given the vote.  In the preceding months, Dr Jacqui Turner, Lecturer in Modern History and an expert on Nancy Astor, advised on a range of projects to mark the centenary in creative and unusual ways, both in Parliament and locally in Reading. Celebrations took place around the country, and in Reading, audiences experienced a public dance and debate, created  and performed by Reside Dance, that brought the story of #Vote100 to life. Here, Dr Turner tells us how her involvement in 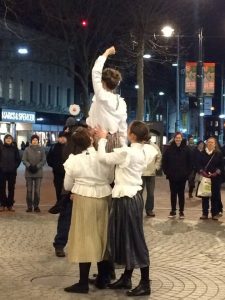 this collaborative project was one of the most challenging and inspirational experiences of her research career.

As a modern British historian my research is on early female pioneers in politics. Therefore, the centenary of the partial female franchise proved to be a busy and exhilarating week when I was privileged to be involved in many local and national events.

However, the event that most challenged my assumptions on how the centenary was communicated and made me consider how to distill my own research to its most fundamental and emotional level, was working with Jennifer Stokes (a doctoral student in Film, Theatre and Television at the University) and Reside Dance with dramaturgy from Miranda Laurence.

Reside Dance is a local group that aims to bring Reading’s culturally diverse community together by developing connections to the places that they reside in through dance and movement. Through the Alliance for Cohesion and Racial Equality, Jennifer secured funding from the Government Women’s Vote Centenary Grant Scheme to create a public dance and debate that communicated the struggle for the franchise within the women’s suffrage movement with historical guidance from me. Specifically, my role was to provide an accessible historical narrative and guidance for a short voice-over which would accompany the choreography.

A hundred years of political narrative captured in a short voiceover

Communicating the complex political narrative of the Votes for Women campaign and providing words for a voiceover in performance time (in seconds rather than my usual thousands of written words, or hours of lecture time) was a shock to the system.

I knew nothing about performance, and initially I struggled to grasp the altogether alien methodology. I made lots of mistakes. Eventually though, I could see how Jennifer’s plans lent themselves to the story beautifully.  It was a challenge but it was also a warm, emotional and fundamental foray into the heart of my own research.

The intensity of working with non-historians brought a freedom and freshness of approach which was amplified by the creativity of those who do not use words to communicate. It required the paring back of the narrative to represent the emotional engagement of those performing and thus communicating to the audience.

We debated whether words were necessary to provide a historical context for the public and eventually we decided that a voiceover would help guide and encourage individual perception though it could not be directive or documentary.

The voiceover needed to amplify the emotional content and unknown connections that an audience member might make to the dance and most importantly be cognisant that dance is a non-linguistic form of expression.

It could not detract attention from the choreography nor inhibit a more visceral reaction to the performance; it needed to maintain an expression of the narrative in its most basic form to reach a whole new audience. At times we were concerned that the complexity of the story may be lost, but it came down to the simple message – we want the vote but there are disagreements and different approaches to getting it.  The rest was detail.  We decided to let go of the idea that we needed to explain the suffrage narrative and allow dance to enhance and intensify the individual emotional response.

Surprisingly for a historian, it wasn’t very difficult to let go of dates and names. 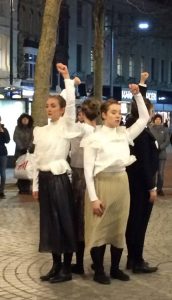 m on 6th February 2018, Reside Dance performed the dance in Reading town centre to celebrate the key historical moments in the suffrage campaign that culminated in the royal assent of the Representation of the People Act 1918. The performance concluded with a discussion with the audience on the issues of rights and equality that are of importance to women and girls in Reading today.

Over a hundred people, passionate about marking 100 years of women’s suffrage, and passers-by who had been drawn in by the music, costume, movement and debate, joined the event. Local Cllr Rachel Eden introduced the event and was interviewed afterwards by BBC South, for her thoughts on women in politics with a live extract from Reside Dance’s earlier performance in the background.

The audience found the performance emotive, yet informative, with one male viewer stating;

“The performance was extremely moving! The choreography did a wonderful job of translating words into movement, giving even a mere man like myself the opportunity to share the feelings portrayed…”.

The interviews conducted by the Dance Artists with members of the audience captured the town’s perspectives on how and if female rights and equality have progressed in 100 years and if not, how they envisage a social change. The interviews were later shared on Blast 1386’s Community Matters programme.

All in all, it was a great success and now discussions are underway to bring the performance to the University of Reading and to take it further afield.