Glastonbury Abbey has played an important part in British history for hundreds of years. Legend says that it is the burial place of King Arthur and it was regarded to be the site of the earliest church in Britain. Now, thanks to a unique archaeological research collaboration and digital reconstruction, we can see parts of the abbey as they appeared at its zenith in the Middle Ages. Here, Dr Gemma Watson, from the Department of Archaeology at Reading, reveals all. 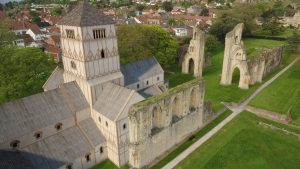 The Anglo-Saxon Church in its modern setting: phase 3 c.1100 AD, © The Centre for the Study of Christianity & Culture, University of York

Glastonbury Abbey, in Somerset, is one of the most important medieval heritage sites in the UK, and has been the focus of archaeological study since the 19th century. The abbey holds a special place in English identity and popular culture. In the Middle Ages it was reputed to be the burial place of the legendary King Arthur and his queen Guinevere, and was regarded as the site of the earliest church in Britain.

Archaeologists led by University of Reading’s Professor Roberta Gilchrist have worked with Glastonbury Abbey in research that reinterprets the archaeology of the Abbey, and digitally reconstructs buildings to show them in their former glory.  These reconstructions, developed by the Centre for the Study of Christianity and Culture at the University of York, allow us to visualise important areas of the abbey that are now ruined or have disappeared entirely:

Two famous legendary features connected with the abbey were also reconstructed. These two reconstructions were largely based on historical evidence informed by archaeological research:

The reconstructions help visitors to understand the complex story of Glastonbury Abbey, and improve understanding of the spatial layout, chronological development and archaeological evidence.

Glastonbury Abbey – cloister fragments, © The Centre for the Study of Christianity & Culture, University of York

Visit www.glastonburyabbeyarchaeology.org to find out more about the abbey’s fascinating archaeology and spiritual history.