After the ousting of Sudan’s President Omar al-Bashir last month, Professor Peter Robert Woodward looks at the economic crisis that precipitated his downfall and what needs to be done to restore the country’s economy in a new post for The Conversation. 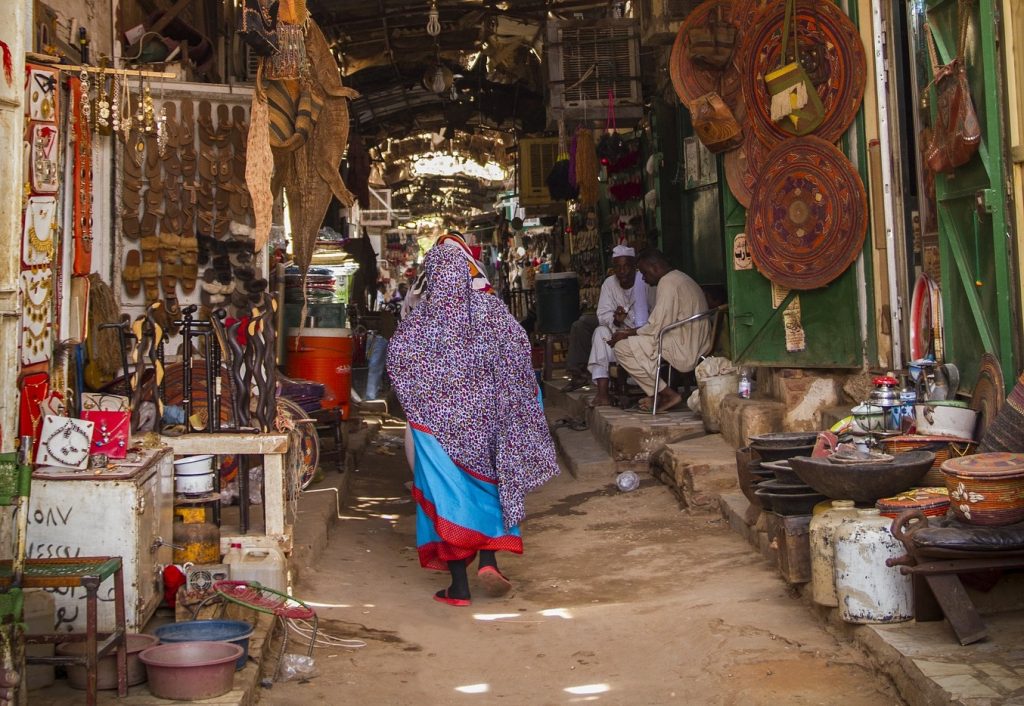 The trigger for the demonstrations that brought the downfall of President Omar al-Bashir in April was the trebling of the price of bread last December. It came after a major devaluation of the Sudanese pound in an effort to make the official rate for the pound drop to that of the black market. With the International Monetary Fund pushing for austerity and the rate of inflation hovering around 70%, the camel’s back was finally broken.

In fact the immediate cause of the economic crisis that brought many thousands of Sudanese out onto the streets in December last year and continued up to and beyond al-Bashir’s downfall lay in the structure of the economy itself.

Sudan’s inherited economy from the colonial era consisted primarily of agricultural exports, particularly cotton. But after independence in 1956 that went into a long decline in the face of man-made fibres and a lack of success in developing of alternative crops – with the partial exception of sugar.

In the 2000s the country experienced something of a boom from oil. But the new wealth wasn’t funnelled into the productive economy – particularly agricultural renewal. Rather it went into short-term rent seeking activities such as urban construction and the expansion of commercial activities.

At the same time the country’s radical Islamism brought US economic sanctions that limited international capital and the prospect of economic diversity. And under the Islamist military regime – in place since 1989 – new wealth went largely to the security apparatus, the government created ruling party and ethnic and regional friends.

This all added up to a highly corrupt system of “crony capitalism”. In addition, Sudan’s large long running debts hung over the country.

The role of oil

The development of oil in Sudan was delayed for many years by civil war in the south, where most of the oil fields are located. But by the end of the 1990s security had permitted development with the southern rebels being pushed back, though not defeated.

Under growing international pressure the military rulers and the southern rebels finally moved towards peace, and in 2005 an agreement was reached. It aimed at a national government but conceded that if that proved unworkable the south, including most of the oil fields, would have a right to a referendum on independence.

In 2011 southerners overwhelmingly chose independence and South Sudan became the world’s newest state. Since then the Sudan government’s oil income has shrunk by about 75%. One reason has been the fluctuating world price of oil, but others are more local.

Oil from South Sudan is pumped north through Sudan to be exported via the Red Sea. After South Sudan’s independence a dispute between the two states about pipeline rents led at one stage to South Sudan closing all its oil production for a year. The flow later restarted, but was once more restricted when South Sudan itself plunged into civil war in 2013, ended only by a fragile peace last year.

The cuts in revenue from oil, combined with sluggish economic growth, led to rising discontent. This came to a head when the government cut subsidies on basics such as bread and oil.

In 2015 a particularly widespread series of demonstrations was met with a violent response. But the causes of discontent remained largely unaddressed and the situation for many people continued to deteriorate, in spite of a partial easing of US sanctions.

What needs to be done

This time around the first mass demonstrations started, unusually, not in the capital but in the regions and in particular in the city of Atbara – which has long been a centre of radical secular thinking – before spreading to the capital in Khartoum.

With memories of the killings of 2015 still fresh there was a good deal of planning going on among the different opposition groups. The security forces also remembered 2015 and this time there was little use of live ammunition, trying to contain rather than shoot the demonstrators in their increasingly well planned and growing efforts.

To restore the economy the post-Bashir government will need to clean up corruption; revive small-scale agriculture in the regions; restore health and education services; and attract investment for productive jobs for underemployed, educated young people who have been the backbone of the uprising.

This post first appeared on The Conversation, 6 May 2019. Peter Robert Woodward is Emeritus Professor of Politics and International Relations at the University of Reading.