Obama’s eight years in office have been beset by partisan rows and tensions between Democrats and Republicans, frustrating the outgoing President’s efforts to push through reforms.

So what might be Obama’s biggest regrets as he leaves office? 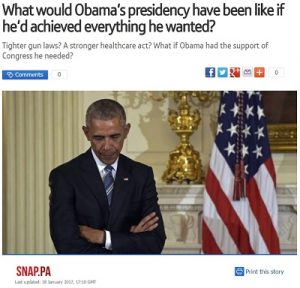 Dr Tom Long, lecturer in international relations at the University of Reading’s School of Politics, Economics and International Relations – and author of Latin America Confronts the United States – spoke to the Press Association with his suggested list:

Read the full story here: What would Obama’s presidency have been like if he’d achieved everything he wanted? (PA)