The UK’s environmental movement has a long history of using protest as a strategy. Disruption is often at the heart of this, either disrupting infrastructure projects themselves in an attempt to stop them going ahead (roads, fracking sites), or targeting existing infrastructure (fuel depots, airport runways or bridges) to disrupt others. Disruption gets people’s attention in a way that a conventional demonstration with placards seldom does – although it is not without the risk of backlash. 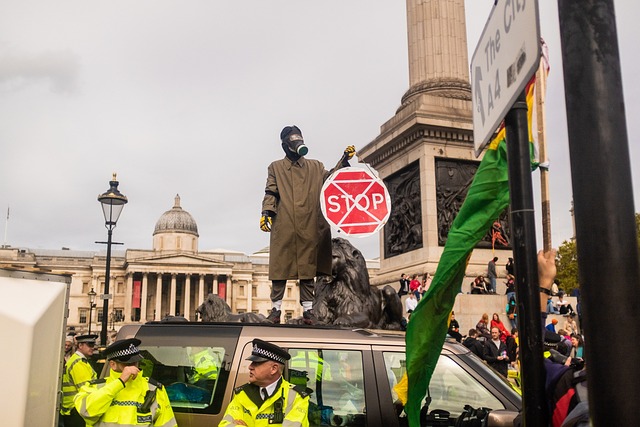 The government is keen to use the law to try to stamp out this type of disruptive protest. At the heart of this drive is the public order bill, introduced in May 2022 by the then home secretary, Priti Patel. But in introducing this bill the government may not have considered how the environmental movement has an equally long history of using criminal law to its advantage.

Getting arrested is often part of the protest strategy. While the new bill is intended to crack down on protest, it may inadvertently provide an avenue for further activism. One could see environmental groups bringing private prosecutions for climate offences committed under the bill, or at the very least arguing that the police should be bringing charges against the other side.

Take the offence of “locking on”. Section 1 of the bill states that a person commits an offence if they attach themselves, someone else or an object to another person, an object or land.

That act must cause, or be capable of causing, “serious disruption” to two or more people or an organisation, and the person must do this intentionally or be reckless to the consequences. The bill provides a defence if the person charged can prove they had a “reasonable excuse” for the act.

This offence is clearly aimed at protesters, who have used gluing and other forms of locking on as a way of preventing their quick removal by the police. But there is no reason why the climate movement cannot argue that a driver of a petrol tanker, in connecting their trailer with a cab, is “attaching an object to another object”.

This attachment, it could be argued, would help cause serious climate disruption to far more than just two individuals. While the driver may not have intended such disruption, one could argue that they are reckless as to whether it will have such consequences. Will the driver have a reasonable excuse defence? That’s for them to prove – the climate movement may try to argue that they do not.

Again, they must intend or be reckless as to whether the creation or existence of the tunnel will have this consequence. The section similarly provides for a “reasonable excuse” defence and states that a person will be deemed to have a reasonable excuse if the tunnel was authorised by the relevant landowner.

With this in mind, environmental groups could bring private prosecutions against fracking companies or proposed underground coal mines such as the controversial Woodhouse Colliery site in Cumbria. These fossil fuel extraction activities are, one could argue, using tunnelling that is capable of causing serious climate disruption, and the relevant companies are reckless as to whether these harmful consequences could occur.

Whether they have a reasonable excuse or not may turn on arguments about whether such new fossil fuel extraction sites are compatible with the government’s net-zero targets.

The defence may argue that they can rely on the “deemed” reasonable excuse where the creation of the tunnel was authorised by a landowner. That provision will normally protect standard infrastructure tunnellers (for example, those building a road tunnel). But where horizontal drilling “tunnels” go under other people’s land (as can happen with fracking), it is not entirely clear that the tunnel will be so authorised.

There was a similar issue with the tort of trespass to land, with groups such as Greenpeace trying to stop fracking using a precedent where former Harrods owner Mohamed Al-Fayed had successfully sued Star Energy for drilling under his land. The government shut down this avenue via the Infrastructure Act 2015.

The 2015 act provides that a “person has the right to use deep-level land in any way for the purposes of exploiting petroleum or deep geothermal energy” under a depth of 300 metres from the surface. This means they can’t be sued in tort for trespass.

But it doesn’t avoid the need for an authorisation from neighbouring landowners for the purposes of the public order bill. Without such an authorisation, a defendant is unlikely to be able to rely on the bill’s deemed reasonable excuse defence.

Even if these arguments end up being given short shrift in the courts, they may at least give campaigners charged with these draconian new offences an opportunity to tell a different story about the offences they have been charged with. Protest is often the canary in the coalmine. If we shut it down, some may avoid being disrupted now, but with climate change, we will surely all be disrupted much more in the future as the planet warms beyond 1.5℃.

Protest is also a safety valve. In further restricting overt protest, the bill could have the unintended consequence of driving eco-activists towards more extreme and violent forms of covert action.

Chris Hilson is a Professor of Law at the University of Reading and Director of the Reading Centre for Climate and Justice.