Thirty international experts met at the University of Reading recently, to help the United Nations develop better policies and practices to safeguard the world’s pollinators.

The meeting of the Intergovernmental Science-Policy Platform on Biodiversity and Ecosystem Services (IPBES) was convened to identify the greatest threats facing pollinators in different parts of the world and was hosted by Professor Simon Potts, Director of the Centre for Agri-Environmental research. 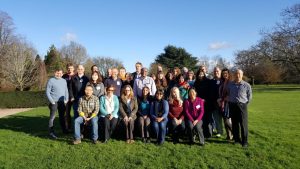 There are many threats to pollinators including agricultural intensification, habitat loss, pesticides, climate change and pathogens. However, for governments to take effective actions, it is essential to know what are the greatest threats in each region.  The expert team systematically assessed the evidence in each region around the world to put the threats in order of importance.  In some cases, where there was insufficient knowledge to make an assessment this was identified as a priority area where new research is urgently needed.

The results of the assessment will be published in the New Year and used to help the Convention on Biological Diversity develop recommendations for its 196 signatory governments to act upon.

Professor Simon Potts is Co-Chair of the IPBES assessment of ‘Pollinators, Pollination and Food Production’. His research focuses on understanding the relationship between land use, biodiversity and ecosystem services and their roles in sustainable food production and is contributing to changing policy, including a drive to ban some pesticides. In a recent interview with the Guardian newspaper, the environment secretary Michael Gove called for a ban on neonicotinoid pesticides, citing evidence from Professor Potts’ research. He said ‘Pollinators contribute somewhere between £400-680m every year to agricultural productivity, benefitting both the yield and the quality of crops. For example, gala apple growers are already spending £5.7m a year to do the work that natural pollinators should be doing, while for some crops like field beans there is evidence that a deficit in pollinator numbers is already having an adverse effect.’

Read the IPBES (2016) Summary for policymakers of the assessment report of the Intergovernmental Science-Policy Platform on Biodiversity and Ecosystem Services on pollinators, pollination and food production here.