Lusala is a wild yam that grows in the forests of Zambia. Research has highlighted that this tasty tuber is part of the staple diet of 96% of rural households in Zambia – but rampant deforestation is putting it under threat. In a recent post for The Conversation, Reading’s Professor Richard Ellis, Dr Alastair Culham and Donald Zulu say that harnessing the knowledge of elders in the community is the secret to protecting this vital food supply – and the forests it grows in – for future generations. 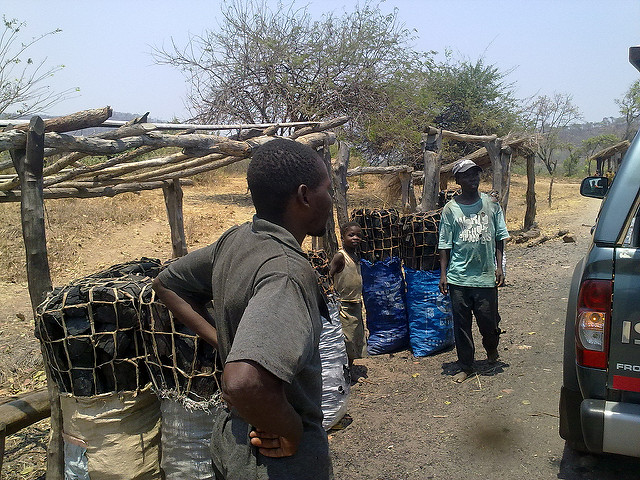 People in Zambia selling charcoal by the roadside made from burning the forests. Deforestation is occurring at an alarming rate in Zambia. Image credit: SuSanA Secretariat/Flickr, CC-BY-SA

Wild harvested crops are a vital source of food in much of the world. Some common wild edible plants in southern Africa include wild mushrooms, such as Termitomyces titanicus, orchids from the genera Disa, Habenaria and Satyrium, and various wild vegetables such as wild spinach (an amaranth), and Cleome species.

The well-known adage “you can’t manage what you can’t measure” is relevant here. If foraging is not quantified then its economic and social value may be ignored by decision makers in a world where major decisions are often driven by quantitative data.

One such unrecorded estimate of the value of foraging has now been provided in southern Zambia.

The tubers of the wild plant lusala are sold in markets. Lusala, the Tonga name for the wild yam Dioscorea hirtiflora Benth, is a tuberous, climbing wild plant that’s indigenous to Zambia and grows in the country’s forests. To answer the question “is this wild edible plant important?”, we surveyed the plant’s role in the lives of 278 rural households across four different districts in the southern province of Zambia and in market traders’ businesses in three towns.

We were astonished at the dependence on this wild yam. Almost all (96%) rural households ate lusala. A high portion collected tubers from forests (83%) while over half (59%) sold tubers they collected. There were no differences among districts.

This new understanding of the level of lusala use means that it’s possible to place a value on it, and to begin to understand how important forests in the region are to maintaining supply. Forests in Zambia are under threat, with deforestation happening at an alarming rate.

Many of those interviewed recognised that lusala foraging from the forests is at risk. Lusala populations were reportedly declining with “hotspots” taking longer to find, and tubers taking longer to collect. Causes cited include: overharvesting (population growth is increasing the number of foragers), declining rainfall, forest clearance for homesteads, crop production, or charcoal production, or wild pigs eating tubers.

Tuber collection was a dry-season activity, almost entirely by women and girls, when crop production activities were limited. The time taken to walk to the “hotspots” where lusala could be found varied considerably among districts, from around 30 minutes to over two hours. Collecting 1kg of tubers took from under 20 to over 40 minutes at these sites, with collecting trips every 4-6 days in April (the peak month).

Lusala is a local, seasonal delicacy that supplements diets: it’s considered tasty, blends well with groundnuts, eggs, fish and meat in meals. It is in considerable demand from urban populations also.In that month, each household collected an average of 28kg of tubers, of which some 12 kg was consumed in the same month and the rest bartered or sold.

Market traders confirmed this. On average, each sold over 800kg of tubers in the month surveyed. Moreover, they were sourcing lusala from as far as 250–320km away to meet demand from urban populations.

There’s a strong socio-economic argument for the protection of native forests when the value of wild-harvested lusala is recognised.

Forests are of vital importance, ecologically, aesthetically, and economically as sources of timber, fuel wood, food, fibre, medicines, to name a few. Forests are particularly important to people in rural areas who forage diverse natural products, including non-timber forest products. This is vital in alleviating poverty; yet the global forest area continues to decline.

The majority of Zambia’s population of over 16 million is rural, including in the Southern Province, and rural poverty is high. Deforestation in Zambia is also high, with between with 79,000 to 150,000 hectares of forest destroyed each year. Charcoal production, fuel wood collection, conversion to farmland and urbanisation are among the contributory factors.

Identifying this previously unrecognised contribution to the quality of life of several million people in central, southern, and western Zambia is only a first step. This wild edible plant and its habitat now need to be protected in a way that enables sustainable foraging by local people to continue.

The good news is that elders in the communities in which we did our research all have considerable knowledge of the plant and of sustainable foraging, vital assets for sustainable development. Their knowledge needs to be harnessed to protect lusala, as well as the forests it grows in. Alternative ways of sustaining the plant should also be considered, such as multiplying tubers in nurseries and reintroducing in depleted areas.

This post first appeared on The Conversation, 30 January 2019. Richard Ellis is Professor of Crop Production at the University of Reading, and a Fellow of the Royal Society of Biology.

Alastair Culham is Associate Professor of Botany and curator of the University of Reading Herbarium. He focuses on broad-based research in biodiversity and taxonomy, including  the effects of climate change on biodiversity, especially that of ornamental and edible plants.

Donald Zulu is a member of staff of the School of Natural Resources at the Copperbelt University, Zambia. He is currently doing a PhD at Reading supported by the Commonwealth Scholarship Commission.