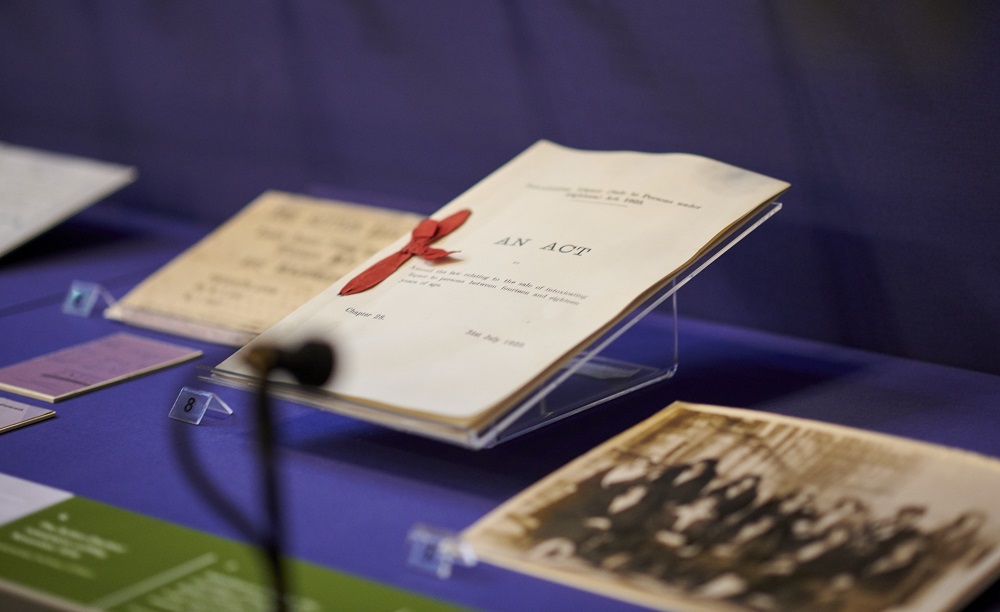 Astor100 has been a great opportunity to promote women’s history in Parliament! As a Senior Archivist in the Parliamentary Archives, I’ve been working for many years now to bring the stories of women and Parliament in our archive collections to a wider audience. My collaborator on much of this has been my colleague Melanie Unwin, Deputy Curator of Works of Art, because the Speaker’s Advisory Committee on Works of Art has also been working to improve the representation of women in the art collection for some time.

Astor in the Parliamentary Collections

In the run-up to 2018, the two Astor artworks in Parliament’s Works of Art collection were placed on display in public areas in the Palace of Westminster, where they remain today. In 2012, a bust of Astor by Zsigmond Kisfaludi Strobla was installed outside the Admissions Order Office in the House of Commons, as part of a permanent display about Parliament, women and the vote. It can be seen by all visitors to the Commons public gallery. In 2016, a portrait relief sculpture of Astor by Michael Rizzello  was installed in Committee Corridor, where it can be seen by all visitors attending committee meetings in the Palace of Westminster. To celebrate Astor becoming the first woman to have a portrait on Committee Corridor, we also produced a short YouTube video, Nancy Astor: the First Woman to sit in the House of Commons 1919-1945  in collaboration with the University of Reading.

In summer 2018, we delivered ‘Voice and Vote: Women’s Place in Parliament’, a major public exhibition in Westminster Hall. This immersive and interactive exhibition took visitors on a journey through 200 years of women in Parliament, with excellent feedback and 107,000 visits. As well as the centenary of the first women getting the vote, it marked the centenary of Constance Markievicz’s election as the first woman MP in 1918, and we displayed a copy portrait of Markievicz gifted from the Irish Parliament to the UK Parliament.

One of the stars of the show was Nancy Astor’s Parliamentary ‘uniform’, the suit and hat she wore when she took her seat in the House of Commons in 2019, on loan from Plymouth Museums. 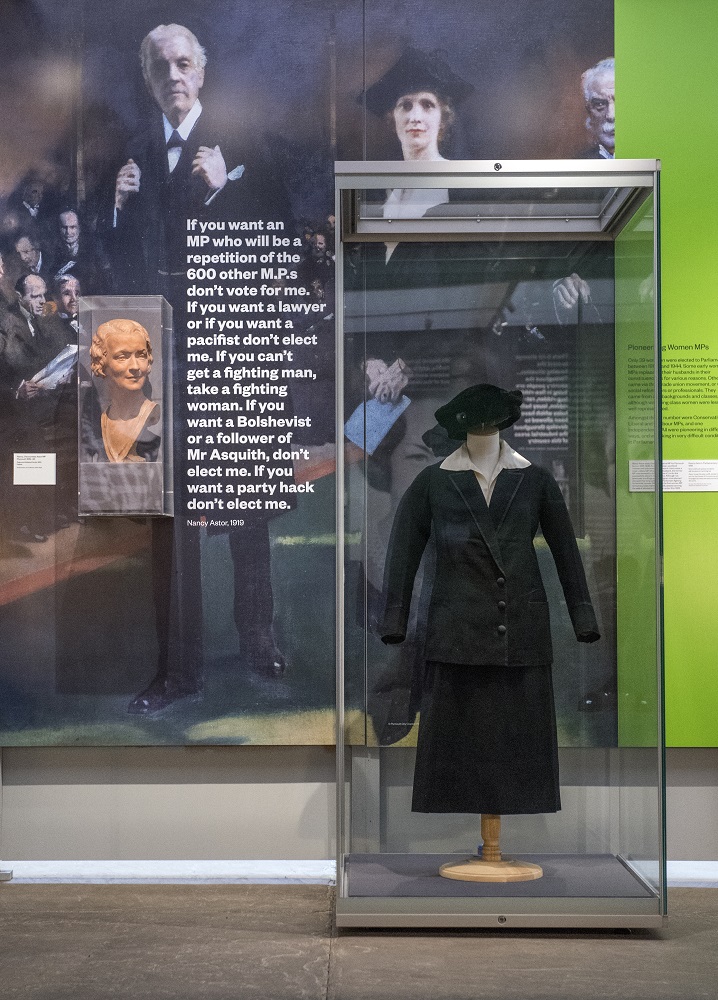 Astor’s outfit was displayed in ‘The Tomb’, a recreation of the first Lady Members’ Room used by the early women MPs. Also featured in the Tomb was a historic desk with Astor’s mailbag – a bag full of facsimile Astor letters from the University of Reading Special Collections, showing how people wrote to Astor from all over the country. 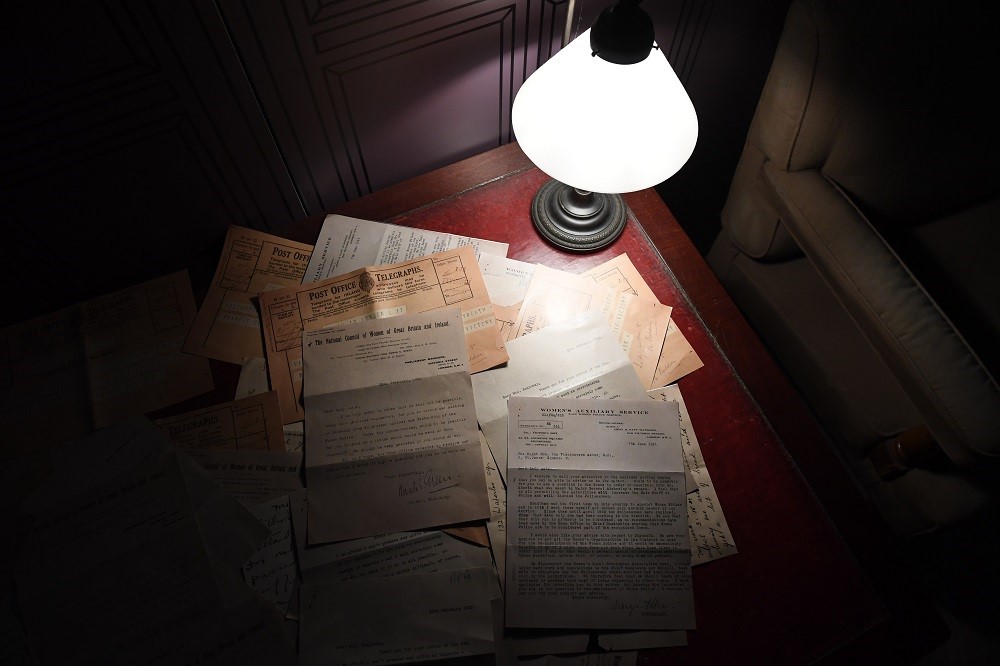 The desk was a very popular part of the exhibition, and we were delighted that it had an ongoing legacy with the Astor 100 project. The graphic panels from The Tomb and some of the facsimile letters were given to Plymouth, where they featured in an exhibition at Plymouth Guildhall in November 2019. The rest of the facsimile letters were given to Reading, and toured to a variety of Astor 100 events during 2019, using different desks at each location.

Among the original archive documents featured in Voice and Vote was a selection of papers belonging to Bessie Le Cras, who was Astor’s Counting Agent in the Plymouth Sutton by-election in November 1919. The Parliamentary Archives acquired these papers a few years ago without any supporting information about Le Cras herself. Vote 100 volunteer Oonagh Gay did sterling research to uncover the story of Bessie Le Cras , who turned out to be a working-class woman from Jersey with a large family. It’s been great to rescue Le Cras from obscurity. 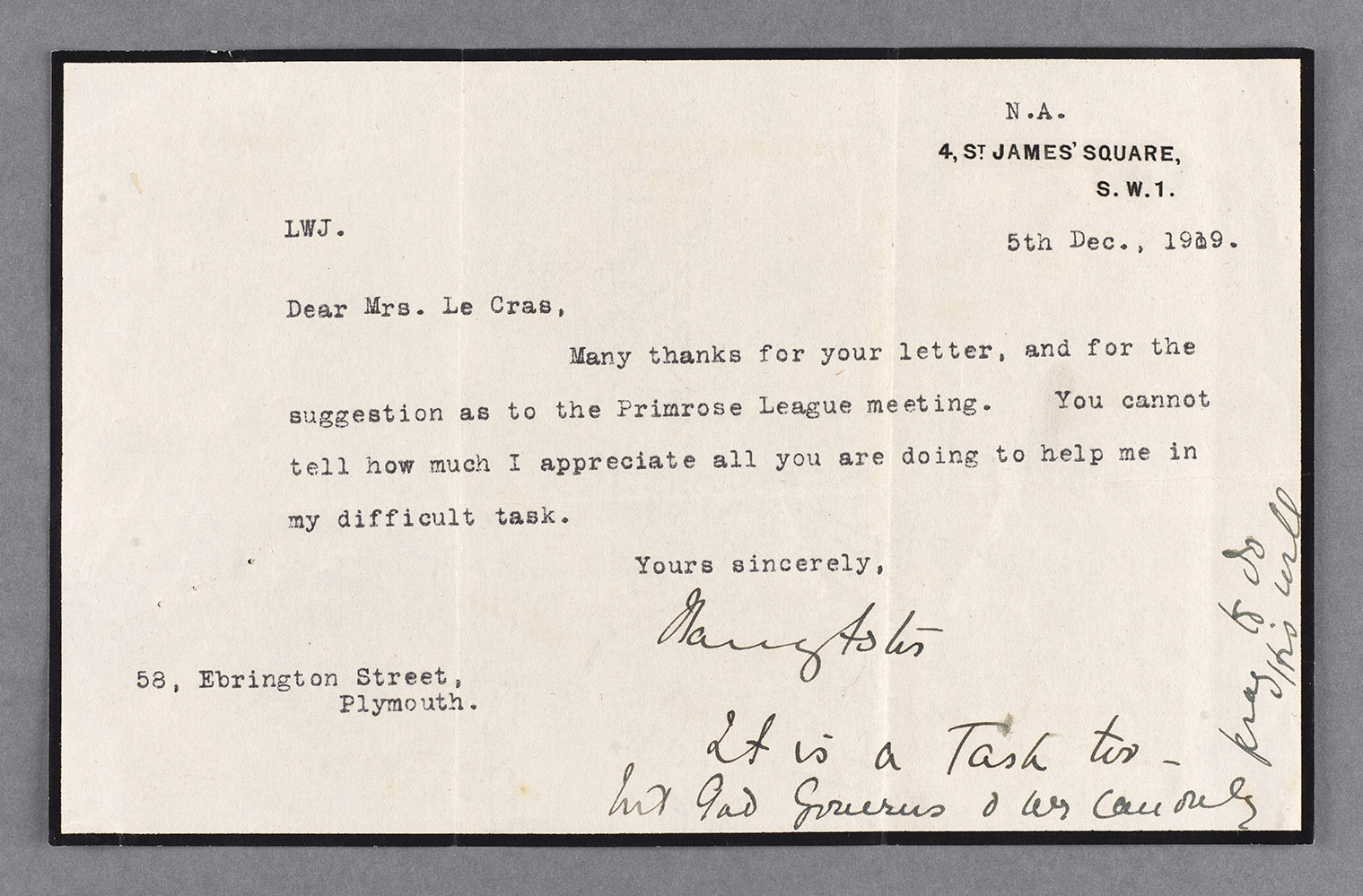 2019 and beyond: Celebrating Astor 100 in Parliament

We were delighted when ‘Vote 100’ segued so beautifully into ‘Astor 100’! Although the Vote 100 project came to an end, we continued to celebrate Astor 100 through Parliament’s art and archives collections. In March 2019, Jacqui Turner gave Parliament’s International Women’s Day Lecture on ‘Nancy Astor – First Steps Towards a more Balanced World’, at the invitation of the Speaker’s Advisory Committee on Works of Art. The portrait of Astor’s introduction by Charles Sims, on loan to Parliament from The Box in Plymouth, was moved to pride of place in Members’ Dining Room in October 2019.

The Parliamentary Archives put on a display about Astor and Parliament, which ran from the centenary of Astor’s election in November 2019 through to March 2020 in various locations in the House of Lords. It featured the Archives’ most important documents about Astor, including her Intoxicating Liquor (Sale to Persons Under Eighteen) Act 1923, the first private members’ bill passed by a woman MP. Royal Holloway’s Citizens 800 project also produced a short video in partnership with the Archives for the centenary: ‘Nancy Astor: First Woman in Parliament’. 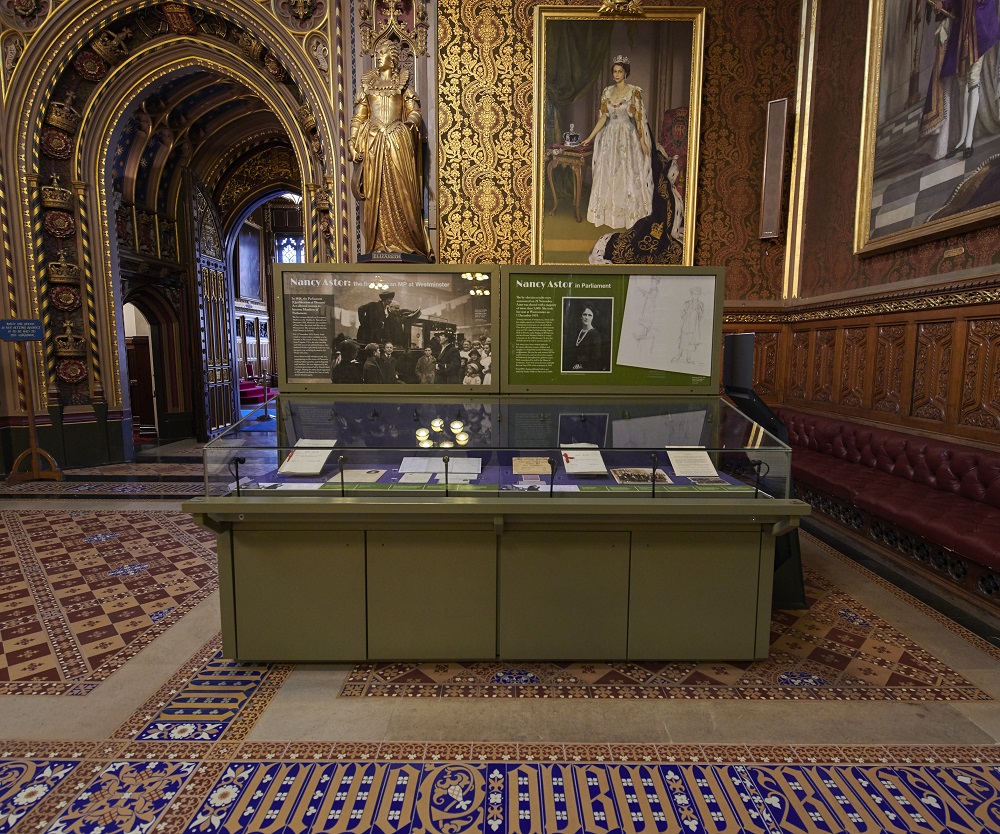 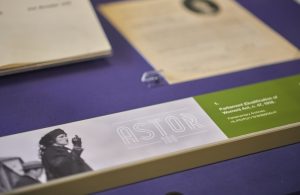 The Archives display featured drawings of the Astor statue in Plymouth on a graphic panel, supplied by the artist, Hayley Gibbs. Hayley also loaned a maquette of the statue to the House of Commons, which was put on display outside the Thatcher Room in Portcullis House from February 2020.

As we move forward towards the true ‘Vote 100’, the centenary of the Equal Franchise Act 1928 which gave women the vote on the same terms as men, I’m keen that Astor’s story continues to be told, along with the other early women in Parliament. To this end, we’re continuing our Vote 100 blog with a series on women MPs written by the House of Commons Hansard Writing Team. Follow the Vote 100 blog for lots more on the early women MPs in the coming months!