Launch of the Reading Centre for Climate and Justice 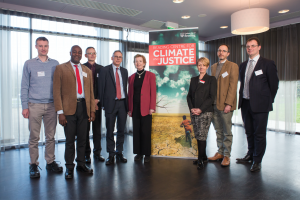 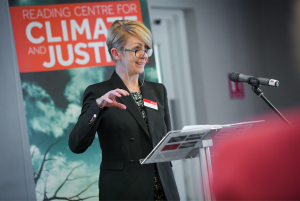 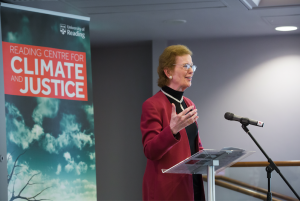 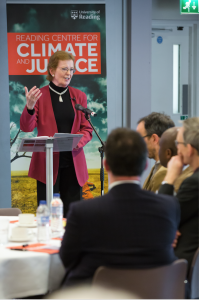 At the University of Reading, the Centre for Climate Justice has been created to bridge the critical disconnect between the scientific aspect of climate change and the social challenges that emerge as a result of its impact. It will develop a new cohort of scientifically literate academics, lawyers, policymakers, and social scientists with the required breadth of knowledge and understanding to enable the development and implementation of just climate policies, and be the first step in bridging the skills gap between the scientific and justice aspects of climate change.

Mrs Mary Robinson launched the Centre with a keynote talk focused on the need to make climate justice a civil rights movement. Endorsing the purposes of the Centre she remarked that

The opening of this Centre marks a significant milestone in the fight against climate change and the drive to ensure – as we take action to save our planet – we are committed to ensuring that people and communities made vulnerable by poverty and social exclusion aren’t left behind.

Mrs Robinson is President of the Mary Robinson Foundation-Climate Justice, and Chair of the Foundation’s Board of Trustees. She is a former President of Ireland (1990-1997) and a former UN High Commissioner for Human Rights (1997-2002). In 2014 –2015 she was the UN Secretary-General’s Special Envoy on Climate Change. And in 2016 the UN Secretary-General appointed Mary Robinson as a Special Envoy on El Niño and Climate.

Mrs Robinson has been the recipient of many honours, including the Presidential Medal of Freedom from President Obama. She is a member of the Elders, former Chair of the Council of Women World Leaders and a member of the Club of Madrid.

The landscape for climate has changed, and your Centre is well equipped to deal with this new changing landscape.

You are taking the lead in enhancing and augmenting the existing knowledge base, and driving forward the people-centred solutions needed to realise climate justice.

The University of Reading is uniquely placed to lead on the research and development of policy that links the science of climate change with justice issues that arise from its development. It is home to the world-renowned Department of Meteorology and Walker Institute for Climate System Research, and it also has outstanding departments for Politics and International Relations, Philosophy, and Law. This interdisciplinary approach will facilitate ground-breaking research that will open intellectual and policy frontiers and will pave the way for future generations of scholars and practitioners.

We see a world where the poorest and most vulnerable communities are given a voice when faced with the impact of a changing climate, and where we tackle the social and economic implications of climate change with equity and fairness.

A film of Mrs Robinson’s talk can be found here.