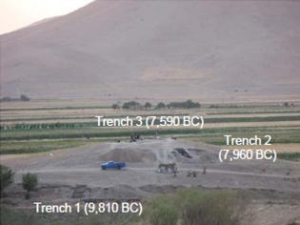 The site of Sheikh-e Abad (34º36’42″N; 47º16’11″E) is situated on a fertile plain at 1,425m asl, surrounded by mountain peaks over 3,000m high, 38kmn northeast of Kermanshah city. It is almost entirely a Pre-Pottery Neolithic mound with a c. 10m sequence of occupation deposits. Three trenches were excavated to study the nature of occupation and human animal and plant inter-relationships in the earliest, middle and latest levels of the site.

There were three main research objectives for the 2008 fieldwork and research at Sheikh-e Abad and Jani.

1. To investigate the nature and development of early settlement and architecture in the Zagros, through surface survey, mapping, geophysics and excavation at both sites.

These sites are amongst the largest known in the Zagros, at c. 130m and c. 90m across, and 8-10m high. At the few Aceramic Neolithic mounds excavated in the Zagros, the earliest levels suggest initial settlement was not permanent, comprising ash layers and pits with no traces of architecture, as at Asiab, Ganj Dareh, and Abdul Hosein. The transformation to settlement with increasingly complex architecture with animal skulls and sub-floor burials was apparently abrupt at many sites. 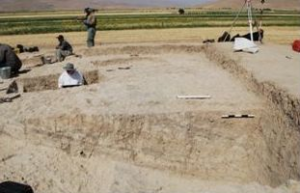 The aim in this first season was to study the nature of similar changes in settlement and architecture at both sites, as evident in a cross-section through the mound at Jani, cut by a channel and illustrated above. The extent and density of occupation at both sites were investigated by topographic and surface survey, and at Sheikh-e Abad, geophysics. The >60m long section at Jani was cleaned, recorded by photogrammetry, drawn and sampled for wet-screening, flotation, micromorphology, phytoliths and geo-chemistry. Developments in settlement at Sheikh-e Abad were also investigated by geophysics and targeted excavation and similar sampling of deposits at the base, middle and summit of the mound, in three trenches, 1-3 respectively.

2. Study evidence of environment and human, plant and animal inter-relations through targeted excavation on both mounds.

Key issues include whether goats were first domesticated in the Zagros, as suggested at Ganj Dareh (Zeder 2005) c. 8,000 cal BC, and whether sheep and domesticated cereals were introduced from more lowland areas to uplands. 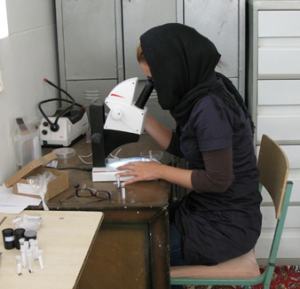 CZAP research is developing an integrated ecological and contextual approach to the study of domestication, and the roles of hunting and gathering within early sedentary settlements. A major focus is on the study of animal and plant remains, as well as molluscs. Indicators of seasonality are being examined for early levels in particular, to establish whether these were seasonal or year-round occupations. Other studies include isotope analysis of indicators of animal diet and movements.

Investigations of indicators of animal management, prior to detectable changes in animal bone morphology, include micromorphology and phytolith analysis of traces of animal dung, diet and pens, as well as dung used as fuel.

Plant remains are being employed to address a range of issues, including the adoption of domesticated cereals, seasonality of occupation and activity, food preparation and storage. Suggestions from Ganj Dareh of an early reliance on tree crops (pistachio, almond) are being assessed through secure evidence, as charred plant remains and charcoal are abundant. Subsistence and socio-economic strategies and practices both within and between the two sites form the basis for detailed comparison and interpretation of local and regional variations.

3. To establish a secure chronological framework, through lithics and 14C AMS dates, critical to understanding internal site chronologies as well as inter-site and interregional interactions and comparative developments within the Near East more broadly.

Key issues include an apparent gap of several millennia between the latest Upper Palaeolithic sites of the Zagros and the earliest Aceramic Neolithic sites, and the need for precise dating of contexts likely to host the earliest goat domestication, as explored in ongoing work by Zeder on goat bones from Ganj Dareh (Zeder 2006).

At Sheikh-e Abad and Jani there is evidence of substantial long-lasting settlements of Pre-Pottery Neolithic date, with varied subsistence practices, including an emphasis on hunting wild goat and sheep. Micromorphological analysis has identified widespread traces of herbivore dung pre- and post-dating c. 8000 cal BC, which together with zooarchaeology and archaeology enable interdisciplinary investigation of early animal management, independent of changes in bone morphology, which may take 500-1000 years (Zeder 2005). The use of wild goat and sheep skulls in cultic practices in Building 2 indicates that these animals had a significance beyond economic.

There is currently no indication that people at either site engaged in agriculture, relating to cereals, but many of the wild plants available in the surrounding landscape were exploited, including lentils, pistachio and almond. Sheikh-e Abad and Jani are large, enduring sites of the Pre-Pottery Neolithic period, inhabited by hunter-foragers rather than farmers, with indications of early animal management. Excavations here illuminate one distinctive pathway in the Early Neolithic taken by human communities of the Fertile Crescent in the millennia after the end of the last Ice Age, with subsistence based on intensified exploitation of wild plants and animals. 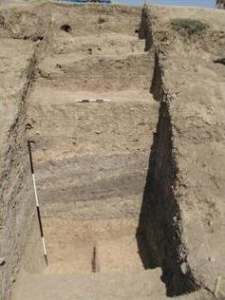 Trench 1 investigated the earliest levels at the base of the mound of ashy midden directly on natural soil. A 14C date (Beta-258647) of 9810±60 cal BC from this ash makes Sheikh-e Abad the earliest Pre-Pottery Neolithic site yet found in Iran and one of the earliest in Southwest Asia. 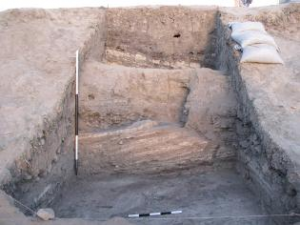 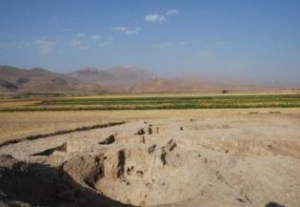 Ash deposits in an open area, Space 2, adjacent to Building 1 are rich in animal bones and plant remains.
Building 2 comprises a T-shaped room, 14C dated (Beta-258648) to 7590±40 cal BC. At the south end close to the floor there was an extraordinary range of items that suggest this room may have been a ritual building. The deposit included four skulls of large wild goats placed in pairs behind each other, with massive horns attached, up to 94cm long. The eastern front skull had red ochre applied to its jaw and upper teeth, and ochre was scattered on the floor. Behind these four wild goat skulls, a skull of a large wild sheep with horns had been placed. 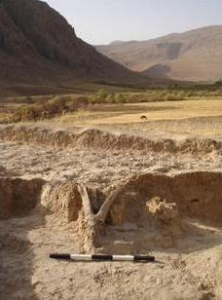 This building provides evidence for ritual activities associated with early goat management and domestication in the region, attested from c. 8000 cal BC (Zeder 2005). In Trench 3 we exposed an area of 118m2, revealing two buildings. Building 1 comprises at least four small rooms, <2x2m. Of these rooms, Space 8 included animal dung deposits, Space 15, an infant buried below the floor. Five flexed Neolithic human burials, one with red ochre adornment, were cut into these rooms from an eroded later level, and excavated.