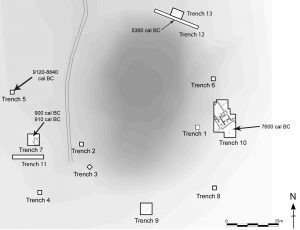 The Neolithic site at Bestansur (35°22’36.7 N, 045°38’44.4 E, ca. 550m asl) is located on the fertile Shahrizor Plain in the western foothills of the Central Zagros mountains, in Sulaimaniyah province, Kurdistan Regional Government, Iraq. The site lies close to a perennial spring and comprises extensive Early Neolithic occupation and later Neo-Assyrian and Sasanian levels, which form much of the 7.5m high central mound. 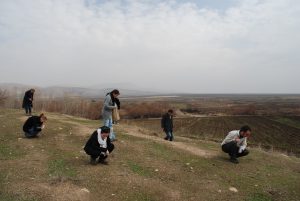 Excavations have been conducted at Bestansur since 2012 to investigate the nature and extent of the Early Neolithic occupation and their economy and society. Surface walking and artefact collection revealed an extensive spread of Neolithic materials, including chert and obsidian tools, in the fields on the west, south and east sides of the mound. Test trenches established that intact Early Neolithic deposits are preserved across an area at least 100m east-west and 50m north-south.

A gradiometry survey revealed a wide range of features including a large water channel and extensive stone-walled buildings, probably Neo-Assyrian in date. Colleagues from the University of British Columbia have conducted excavations to locate the later structures across the site. These investigations found substantial stone architecture enclosing spaces containing in situ ceramics in abundance, including large storage jars.

Through boreholes and column-sampling taken by Rob Batchelor (QUEST), investigations into the early site formation processes and environmental history of Bestansur are underway at the University of Reading. A public outreach programme was developed by Rhi Smith (MERL), engaging local teachers with the history and significance of the site, as well as the archaeological and scientific processes employed by the team. Whilst in the field, we have continued a programme of outreach activities, including engagement with many media and TV companies, including Rudaw TV. 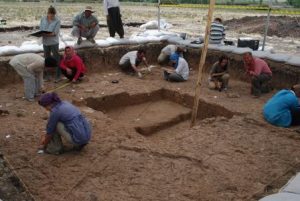 The expansion of key trenches around the mound have revealed the substantial architecture of the Neolithic settlement. The excavations revealed a wide range of activities in exterior areas around the edge of mound and finely stratified occupation. To the west of the mound, excavations in Trench 7 revealed a pisé building, including a room containing a substantial quantity of ground-stone tools. Outside the building, we found a double human burial, with an adult male and adult female buried head to toe in tightly constricted positions.

A 15m section across the northern edge of the existing mound (Trench 12) and a step trench into the fields below (Trench 13) have yielded glimpses into the core of the Neolithic settlement, with fine plaster surfaces, layers of dung and ochre, comparable with Neolithic sites across the region, such as Çatalhöyük.The fine stratigraphy of these surfaces in Trenches 12 and 13 contained tiny beads, fish and small mammal bones, a fragment of a rare flanged alabaster bracelet, small clay objects and two deposits of pierced fishing net sinkers.

On the eastern slope of the mound, excavations in Trench 10 have located two distinct phases of a large porticoed building: the earlier walls in mud-brick (Building 8), with multiple applications of coloured plaster, and the latter in pisé with restricted plaster use (Building 5) radiocarbon dated to c. 7700 BC.

Building 5 was found to contain defined spaces, including a large oven with multiple layers of ash containing a large ground stone and a stone macehead. Lining the walls of the uppermost phase of Building 5’s portico, a strikingly engraved stone bears an elaborate network of lines and dots scored deeply into the surface.  The human remains of more than 72 individuals were deposited below the floor of one room, interspersed with stone and shell beads. This number of individuals is higher than that found in many houses from other Neolithic sites of the Middle East, such as Tell Halula in Syria, where 5-15 individuals were buried within single buildings.

The high number within Building 5 at Bestansur is larger than expected for a single household and suggests that there were extensive and long-lived relations between communities of individuals. We are very grateful to the Sulaimaniyah Antiquities Directorate for permission to export human bones and teeth for analysis, including diet, health and mobility. We are carrying out a full programme of analysis of this very special assemblage of human remains from the Early Neolithic period.

Contemporary buildings have been identified around Building 5. Each of the buildings located in Trench 10 have distinctive materials in their construction, including the colour of mudbrick, the application of plasters and the presence of matting.

External areas surrounding the buildings provide evidence for activities conducted in these spaces. Hearths relating to each building have been located, with butchery and stone-working debris and the deliberate deposition of worked clay objects.