An interdisciplinary team is investigating the Neolithic transition 15,000-6000 BC in the eastern Fertile Crescent region of eastern Iraq and western Iran, led by Professor Roger Matthews with Dr Wendy Matthews and Dr Amy Richardson at the University of Reading, UK, supported for five years from October 2018 by a European Research Council Advanced Grant (ERC AdG 787264). This region was a core zone of Early Neolithic developments including animal and plant management and sedentarisation but has so far been under-researched. Building on previous work within the Central Zagros Archaeological Project, the MENTICA project will be conducted through a programme of six integrated Work Packages examining changes in climate, plants and animals, built environment, food-ways, death and burial, and craft and technological innovation, within a theoretical framework of community networks and identities. The aim of the project is to generate community-scale insights into the Epi-Palaeolithic to Early Neolithic transition, through inter-disciplinary contextual analysis of new data from excavations at archaeological sites in the eastern Fertile Crescent. 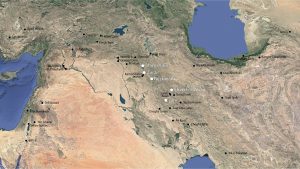