In February 2020, the Participatory Integrated Climate Services for Agriculture PICSA team were pleased to attend the 6th International Conference on Climate Services (ICCS6), hosted by the Indian Institute of Tropical Meteorology (IITM) in Pune, India. The delegation of 6 PICSA experts and practitioners spent 3 days presenting their experiences and the associated learning from developing, implementing and monitoring PICSA in a range of different farming systems across three continents. The conference was also an opportunity for us to interact with some of the world’s leading experts on climate services (CS), and explore current issues, trends and topics of interest within the CS community. These included: collaboration across different fields, participation, contextualisation and transparency. In this post, I reflect upon where and how PICSA fits in relation to these.

The theme of collaboration first emerged in a side event prior to the main conference on ‘upscaling CS through policy and effective communication,’ led by an Indian science communication organisation called Vigyan Prasar. In this, speakers from public and private sector CS programmes in India called for increased integration of users and producers of CS, as well as between climate scientists and other sectors like agricultural extension. This was echoed by calls in several plenary talks for increased integration of different sectors in the production and use of CS. Indeed, on the final day, when David Corbelli from the UK Met Office summarised emerging themes from the conference, he emphasised the importance of working across disciplines. Similarly, Anna Steynor from the University of Cape Town gave a provocative talk on Day 3 that called for increased and improved collaboration across sectors, and between different stakeholders in CS. Specifically, she called on her audience to allow time for building trust in CS projects, to learn from others, including their mistakes, and to take a flexible, humble and iterative approach to CS collaborations.

Participation came out very strongly as a desirable aim for CS projects and organisations to achieve. Terms like ‘co-production,’ ‘two-way communication,’ ‘user engagement,’ and reaching the so called ‘last mile’ of user engagement were the in-vogue buzzwords throughout the side events, plenary talks and small sessions, as well as conversations at breakfast, lunch and dinner. In one plenary talk on Day 2, Roger Pulwarty from the US National Oceanic and Atmospheric Administration called on the audience to empower people to feel capable of acting, not just to provide them with the required information to react. Similarly, Anna Steynor’s talk on Day 3 called for the CS community to challenge the incumbent power hierarchies that keep funding and decision-making in the hands of institutions in the Global North. She also implored the audience to acknowledge the importance of CS users’ knowledge, and to break the mind-set that useful knowledge is only held by climate scientists and northern institutions.

The importance of contextualising climate services was another popular theme. This was evident in one pre-conference side event, in which IITM emphasised the importance of understanding local climate patterns and tailoring climate information accordingly. In the introductory plenary session Felipe Lucio from the World Meteorological Organisation (WMO) introduced an initiative to develop national frameworks for CS to complement the existing global framework (GFCS). The importance of context was unsurprisingly also reflected in a session on contextualising CS, as well as in sessions on CS for the health sector, capacity building for CS, and climate services for resilient development. The clear message was to consider the relative ability of different users to take risks, the need for tailoring communication to different needs, and the recognition that coping mechanisms and adaptation strategies must match the resources available for different users.

Transparency emerged as an important consideration for conducting CS practice in an ethical fashion. Jillian Schacher from the University of Leeds gave a talk on Day 1 about business models for CS, in which she stressed the need for transparency in terms of how CS products are produced, as well as their accuracy and limitations. Similarly, the need for transparency was discussed in an interactive session on ethics for climate services on Day 3, during and after which several researchers committed to developing a code of ethics for CS practice.

So, where does PICSA fit in?

Although each of the above themes received much attention and was fervently accepted as something to be aimed for, they were often perceived to be beyond reach. Increased and improved collaboration and contextualisation were presented as things to be aimed for, not things that are being done already. Similarly, participation, transp 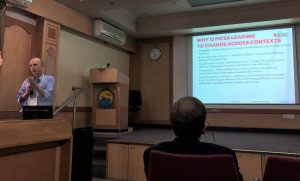 arency and the so called ‘last mile’ of user engagement were talked about as if they were almost impossible to achieve. These calls for collaboration, participation and contextualisation were set against an incumbent ‘top-down’ narrative of ‘producers’ developing and perfecting information and technology for adoption by ‘users,’ which did not seem to match the desired emphasis on participation. Associated with this somewhat pessimistic attitude towards the feasibility of CS effectively reaching its users was a view that there is limited evidence for the value of CS. Indeed, plenary speakers, including Felipe Lucio from WMO, repeatedly emphasised the need for more evidence of the social and economic value of CS.

However, it became increasingly clear during the course of ICCS6 that PICSA represents a step change in relation to the aforementioned themes, and that we have clear evidence of its success. The presentation by Caroline Staub on the implementation of PICSA in Haiti showed that volunteer farmers can successfully use PICSA to provide extension and climate services in a country where these services have limited support from the State. Similarly, Graham Clarkson’s presentation about the use of information technology by extension staff working with farmers showed that with careful consideration and facilitation, technology and contextualised climate information can enhance relationships between farmers and extension agents. Diana Giraldo’s and Sam Poskitt’s presentations on the use of PICSA in Latin America and Bangladesh, respectively, illustrated how the emphasis of the PICSA approach on individual contexts has successfully encouraged farmers to make beneficial changes. The focus on empowering farmers to make decisions based on their own individual contexts enabled them to plan and manage their agricultural practices in relation to their local climate. This was neatly encapsulated by Peter Dorward who ended his presentation on the effects of PICSA across multiple countries by saying: “it is impossible to give exact information and advice to farmers that works across all contexts, but what we can do is provide information and tools that empower them to make decisions that are right for them.”

Attending ICCS6 in Pune was a great opportunity for the PICSA team to engage with the wider CS community, to explore current issues and areas of interest in CS, and to identify where PICSA fits with this. The themes that emerged showed that the CS community is keen to increase collaboration on CS projects across different fields, incorporate participatory approaches with greater transparency into CS, and improve contextualisation of CS for those who use it. The prevailing narrative is that these are intangible goals that have not yet been reached. However, PICSA has achieved every one of these goals, and has clear evidence of this success. So, what can we learn from this? I suggest 4 learning points for researchers and practitioners of CS, below:

1) Collaboration, participation, transparency and contextualisation are desirable goals and vital for the success of climate services. However, for many projects and organisations these remain unrealised.

2) Climate services should seek to empower their users to make decisions that are right for them, rather than telling them which decisions to make.

3) Climate services should be co-developed with intended users. More emphasis should be placed on transparency and making climate information useful and usable by individuals, rather than on perfecting the science behind it and then disseminating information in a top-down fashion.

4) These goals are not simple, but they are also not impossibly difficult. PICSA has realised these goals across 3 continents and has substantial evidence of its success. 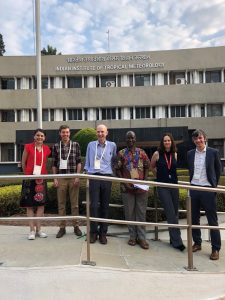