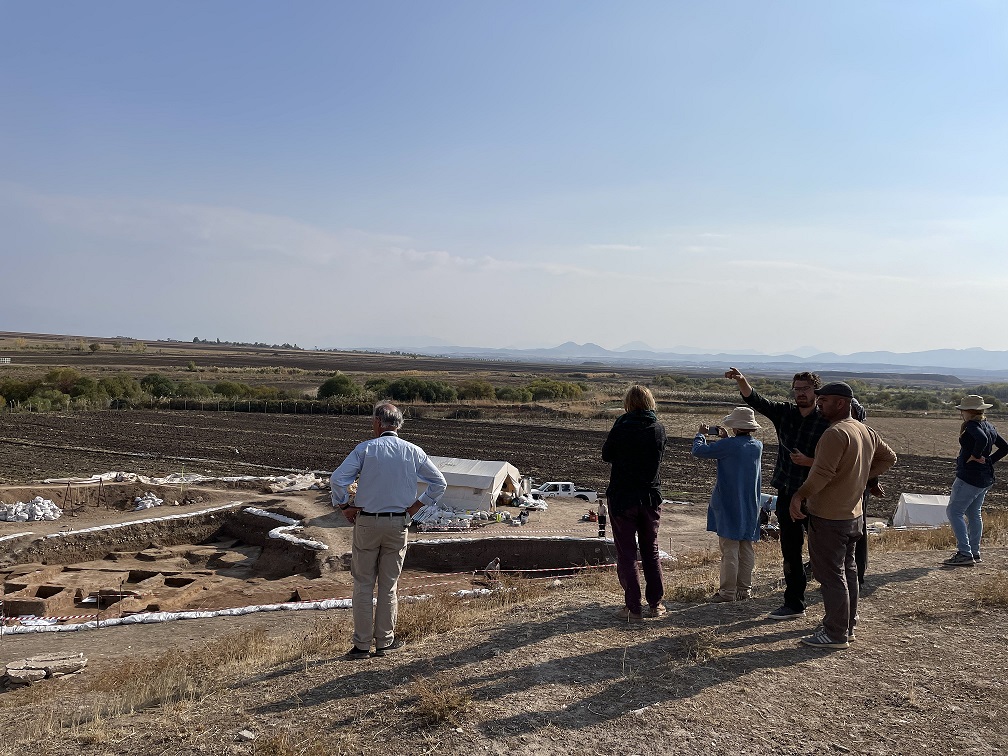 The Iraq-UK Project team conducted a ten-week season of excavations at Bestansur in Autumn 2021. Two days were also devoted to survey and a sounding in the vicinity of Zarzi Cave. We are extremely grateful for all the support we have received throughout the season, and beyond, from all colleagues in the Sulaimani Directorate of Antiquities and Heritage, in particular Kamal Raeuf Aziz and Sami Hama Rashid, led by Director Kamal Rasheed Raheem. We thank also the staff of Slemani Museum including its Director, Hashim Hama Abdullah, and conservator Nyan Nasser for all their support. We were very pleased to receive a visit from staff and pupils of Bestansur High School and to be honoured with an inspiring visit to their school.

The major aim of the 2021 season’s excavations at the Early Neolithic site of Bestansur was to expand the exposed area of Neolithic architecture to generate major new insights into the neighbourhood scale of occupation at the site. We achieved this aim by excavating Neolithic levels in two areas adjacent to Trench 10 where we have conducted excavations already for several seasons. During the course of excavations, we further augmented our recording procedures to develop our project geodatabase with the use of a GNSS system and FPV drone, the latter of which was kindly lent to the team by the Sulaimani Directorate of Antiquities and Heritage.

In Trench 10N and Trench 10W, we excavated Late Islamic levels, including a burnt building and stone walls dating to the 17th century AD, and an extensive activity area characterised by more than a dozen tanours, large storage features and basins. Underlying the later levels, major phases of Neolithic mudbrick architecture were identified in Trenches 10N and 10W, probably contemporary with the Building 8 and Building 5 phases in the central region of Trench 10. These Neolithic phases remain to be fully excavated in future seasons.

The architecture at Bestansur continues to demonstrate considerable knowledge of earthen construction techniques and elaboration. Building 9, the smaller building to the east of Building 5 in Trench 10, was well-constructed and had traces of probable red pigment on the eastern wall of the entrance portico, Space 51, and on at least two of the well-laid multiple floors of the ‘reception’ room, Space 61. Further excavation of burials was focused on eight individuals in Space 61 of Building 9 and the extended areas of Trench 10W and Trench 10N. While Buildings 5 and 8 have been the prior focus of human burials, this season increasing amounts of human remains were found in the extension areas of Trench 10. 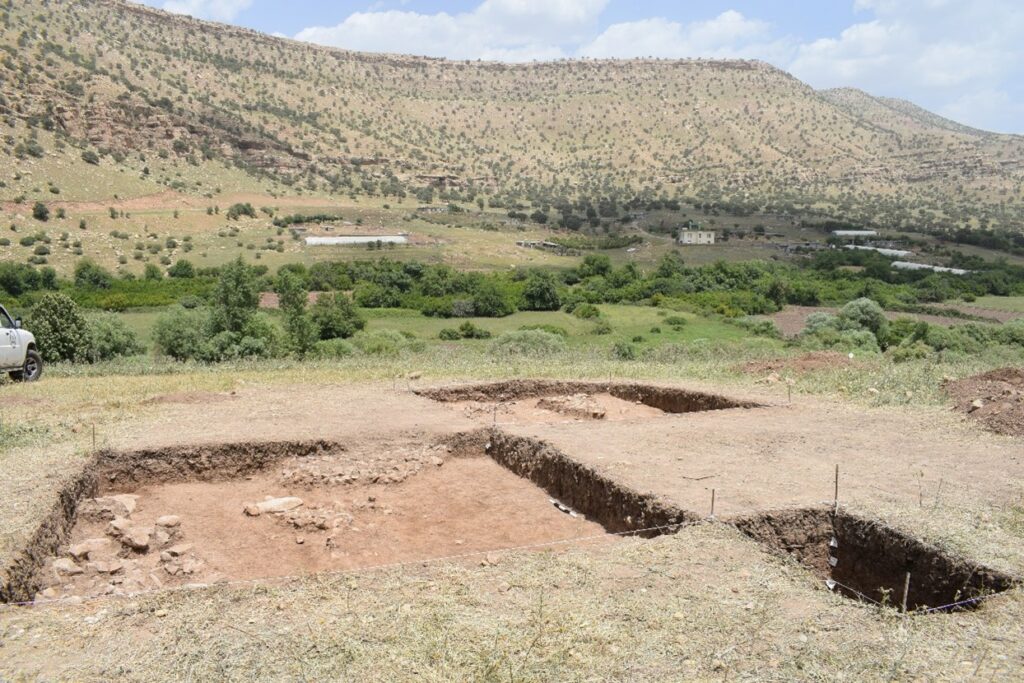 In 2021, we worked in the region of Zarzi Cave for two days. At Zarzi Cave itself we systematically collected chipped stone materials on the cave talus and lower slopes. These lithics all appear to date to the Epipalaeolithic period.

An open air site (Zagros Survey ZS3, now named Zawi Chami Razan) is situated across the Chemi Tabin river from Zarzi Cave on a low knoll overlooking the river. We located this open-air site during a survey season in January 2013 based on lithic scatters and a large boulder mortar (discussed in our Open Access monograph). In the 2021 season we conducted systematic surface survey of the site; significant quantities of ground stone tools including boulder mortar pieces were recovered across the site. We excavated a 2 x 2m sounding at Zawi Chami Razan. A line of stones may be the remnants of a wall and lithic finds from this sounding indicate occupation of Epipalaeolithic date. We revisited the site in May 2022, for a two-week season of excavations at Zawi Chami Razan, expanding on the investigations in 2021. Four trenches have revealed substantial evidence for food preparation and craft activities. Further survey and excavations have found numerous boulder mortars and stone pestles, stone structures, and food debris such as burnt animal bone, snail shell and crab claw. 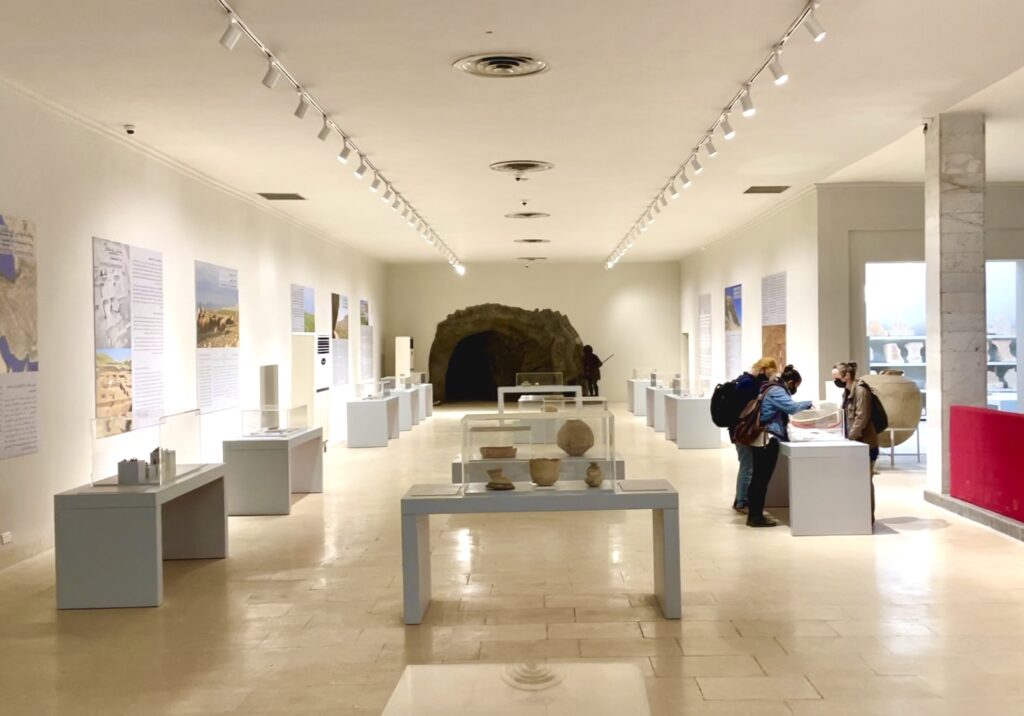 During our 2021 field season, we were pleased to visit the Slemani Museum for the opening of the new Paikuli gallery. This was also our first opportunity to see the new Prehistory Gallery following its official opening in February 2021. Members of the team worked with the Slemani Museum, Sulaymaniyah Directorate of Antiquities and Heritage, and Dr Rozhen Kamal Mohammed-Amin at Sulaimani Polytechnic University to design new displays that would engage visitors with the deep cultural heritage of local and global importance in the region and to showcase the prehistory collections at the Slemani Museum. You can read more about our collaboration here.

Whilst in the field we initiated two new collaborative projects working with the Slemani Museum and the Sulaymaniyah Directorate of Antiquities and Heritage, including a second phase of heritage protection measures with five museums across Iraq, supported by the British Council, and a new initiative to support and develop the creative economy through heritage and eco-tourism, funded by the Arts and Humanities Research Council.