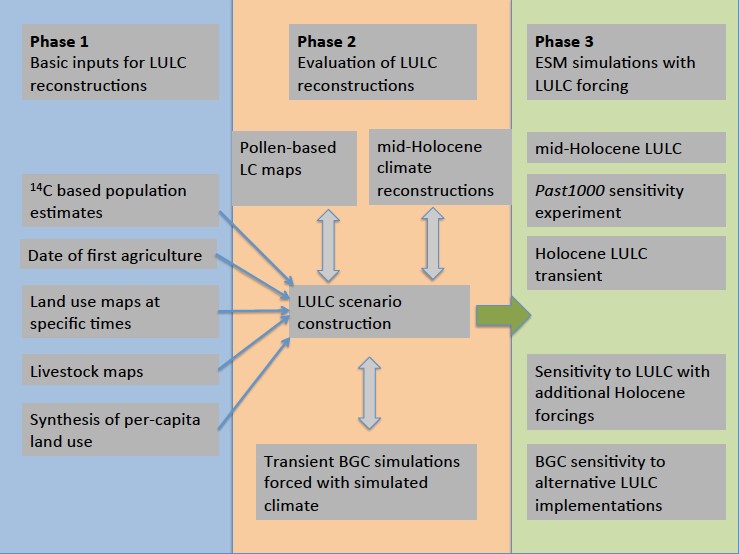 Sandy Harrison and Laia Comas-Bru hosted a meeting in Reading this week bringing together members of the PAGES LandCover6k group and the CRANE and CLASS projects to explore synergies in the mapping of landcover for Europe and the Middle East and analysis of the impacts of vegetation and climate change in human activities in the region.

PAGES LandCover6k (http://www.pastglobalchanges.org/landcover6k) are developing global maps of land use and land cover (LULC) changes during the Holocene in order to provide inputs to scenario development models such as HYDE and KK10, which will ultimately provide data sets to prescribe LULC changes for climate model simulations within the framework of the Palaeoclimate Modelling Intercomparison Project (PMIP). The SPECIAL group has led the development of a protocol describing how the data will be developed, tested and implemented in climate model sensitivity tests (as shown in the figure below) – a paper describing this has already been submitted to Geoscientific Model Development. The LandCover6k group focusing on Europe, led by Nicki Whitehouse (Plymouth) are already well advanced in providing maps for the mid-Holocene interval.

CRANE (Computational Research on the Ancient Near East, www.crane.utoronto.ca) is an international and interdisciplinary research project that is creating a platform for data integration and analysis to model and visualize connections between social, economic and environmental factors at various spatial and temporal scales in the Middle East. In addition to archaeological and palaeoenvironmental data synthesis and analysis, CRANE is working with climate modellers at the University of Toronto to produce high resolution transient simulations of the climate of the Middle East through the past 21,000 years. SPECIAL will be working with CRANE, in part to produce climate and environmental reconstructions for the region, and in part to explore how environmental modelling tools (such as the P and PC models) can be used alongside agent-based modelling to understand the development of farming across the region. These are also activities that are relevant to a new ERC project running in Durham, the CLaSS project (Climate, Landscape, Settlement and Society: Exploring Human-Environment Interaction in the Ancient Near East (https://www.dur.ac.uk/archaeology/research/projects/all/?mode=project&id=1044), so it was useful to have the PI of that project, Dan Lawrence, at the Reading meeting.

The major outcome of the meeting was the realisation that CRANE and CLaSS, working together with the LandCover6k Europe group, could provide inputs for the Middle East for the ongoing scenario-development work in LandCover6k on a relatively fast track, using data that they have already assembled. A secondary outcome was a plan for using SPECIAL’s existing and planned environmental reconstructions for climate model evaluation within the CRANE project – isotope data from SISAL, the quantitative reconstructions produced by Sean Cleator, and the climate and vegetation reconstructions for the EMBSeCBIO region planned as part of a new PhD project starting in summer this year. Finally, it is clear that the P and PC modelling efforts that are part of our collaboration with Imperial and Tsinghua, could usefully be used to link climate and archaeology in the Middle East. So, no rest for the wicked and here’s to international collaboration!