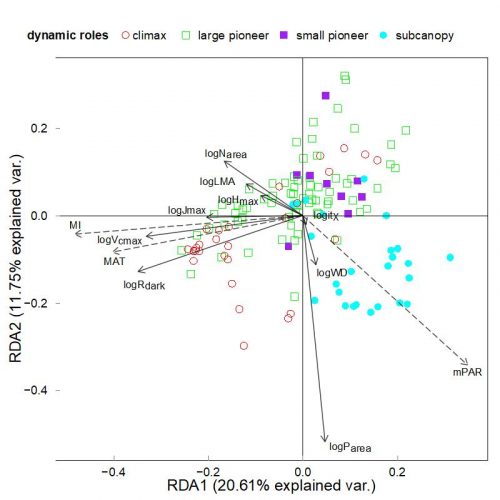 Our new paper “Functional trait variation related to gap dynamics in tropical moist forests: a vegetation modelling perspective” is now online in Perspectives in Plant Ecology, Evolution and Systematics. This paper continues the exploration of the causes of variations in plant photosynthetic traits but – in a first for us – focuses on trait differences linked to spatial and temporal niche differentiation within communities. We use trait data from tropical moist forests in Australia and China (the China Plant Trait Database again!) and show that within-community trait variation linked to canopy position and vegetation dynamic roles can be explained by the coordination hypothesis that Rubisco- and electron-transport limited rates of photosynthesis are co-limiting under field conditions and the least-cost hypothesis that CO2 drawdown minimizes the combined costs per unit carbon assimilation of maintaining carboxylation and transpiration capacities. These findings open up the possibility of developing a theoretically-based ecophysiological representation of vegetation dynamics in the next-generation vegetation model.