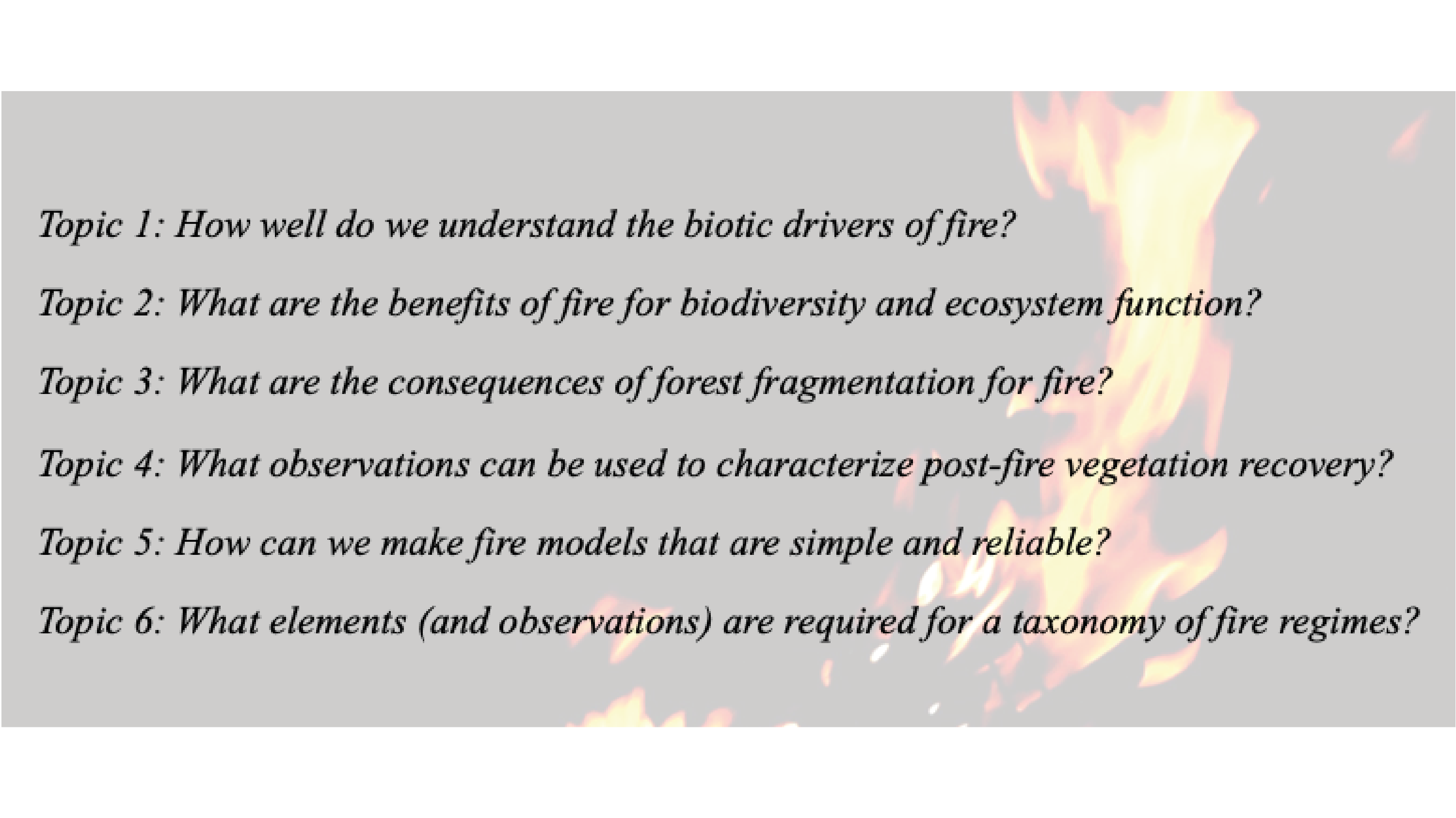 A three-day international virtual mini-workshop of New Directions in Fire Ecology and Fire Modelling, led by Colin Prentice and Sandy Harrison, was held from 11 May to 13 May. Around 15 people took part in this workshop. Every day, two topics were raised as the format of questions were discussed after five people present their interest in any aspects of fire ecology. After this mini-workshop, Leverhulme Centre for Wildfires, Environment and Society held a follow-up workshop with the same topic on 25 May to provide an opportunity for early-career scientists to present their relevant work and have a brainstorm about future fire research directions. I am glad to attend both productive workshops and share my research of using the vegetation-fire relationships to reconstruct palaeo-fire regimes.

The element point of this workshop is that fire is necessary for the ecosystems (e.g., plants growth) although it can bring many troubles. What factors can influence fire and how the factors influence fire have always been discussed. Previous fire studies have shown inconsistent results on the effects of fragmentation, ignitions sources and human activities (e.g. human population, fire suppression). Some studies show these factors can promote fire while some found these may suppress fire. It might be explained by the differences between non-fire-adapted and fire-adapted ecosystems, but deeper explorations are needed. Traits of the plant species also show different patterns in non-fire-adapted and fire-adapted ecosystems. Specifically, fire-related characteristics such as resilience partially reflected by serotiny occur more on plants in an infrequent-fire ecosystem, and resistance, partially reflected by thick bark, may appear more frequent on plants in a frequent-fire ecosystem. During these workshops, three key points about future fire research were mentioned:

After the workshop, discussions are continuing via email groups. Some draft figures were produced to explain and support the three key points. I worked on the part of plant adaptations and feedbacks to fire and tried to use figures or maps to show changes in the abundance of different fire-related traits along the gradient of fire return time. Some general investigations have been done on several plant trait datasets: 1. BROT 2.0 database which is a functional trait database for Mediterranean Basin plants; 2. TRY plant trait database; 3. Australian data provided by Sandy and her Australian colleagues; 4. sPlotOpen data which is a global dataset of vegetation plots. Fire return time is calculated using two fire data: GFED4 burnt area data (1996-2016) and MODIS MCD64CMQ burnt area data (2000-2020). Results based on these two fire datasets have some differences which we will have further comparisons. By now, we have found that resprouting capacity after fire (RespFire in the BROT database, defined as the average proportion of adult plants that resprout) is decreasing when fire return time increases using either the GFED4 or MODIS fire data in the Mediterranean region. In Australia, the proportion of the number of resprouting species also shows a decreasing trend when fire return time increases. Further research based on the whole European region using sPlotOpen data is still in the process.

Ideas produced in these workshops will be shown in the special issue of Environmental Research Letters written by Colin and Sandy in the next few months, please stay tuned.