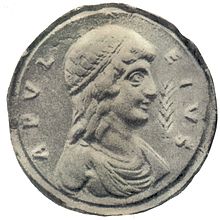 Lucius Apuleius was a political novelist, born in a Roman colony as a native to Madaura, Morocco, c. 120 CE. Studying at both the Carthaginian and Athenian universities, the author took interest in Platonic philosophy. He married a wealthy widow who transferred all her money to him, causing her family to charge him with gaining the affections of the widow by magic. Apuleius’ defence in court is recorded in ‘A Discourse on Magic,’ an amusing and spirited speech which got him off the charge . His other works include Gods of Socrates, Florida , and Metamorphoses (known also as The Golden Ass), which included Cupid and Psyche: A Story. After his initiation into the mysteries of Isis, Apuleius studied Latin oratory in Rome and made a success in the Roman courts. Later he travelled widely through Asia Minor and Egypt, studying philosophy and religion. The Golden Ass presents a tale that has similarities to his Apuleius’ own life:, he was well travelled and— after running short of money on a visit to the Olympic Games— he was forced for a while to live on his wits. Apuleius was a Berber, having described himself as ‘half-Numidian, half-Gaetulian’ and Latin was not his first language. He comments in The Golden Ass that when he was studying in Rome he ‘was a stranger there’, as with Lucius’ time spent as an outsider. Apuleius’ novel is the only ancient Latin novel to survive in its entirety, showing that great classical literature is not just the preserve of authors born in Rome.