Terence (Publius Terentius Afer) was born in Libya c. 195 or 185 BCE. He came to Rome as a slave to a senator who taught him how to write Latin, the skill that earned him his freedom. Terence joined the Scipionic Circle in Rome, where patrons of Scipio (of all disciplines) shared a love of Greek culture and literary tradition and related their philosophies to Roman contexts. Here he began adapting late Attic Greek comedies to conversational Latin works. Between 166 and 160 BCE, Terence produced his six surviving comedies. 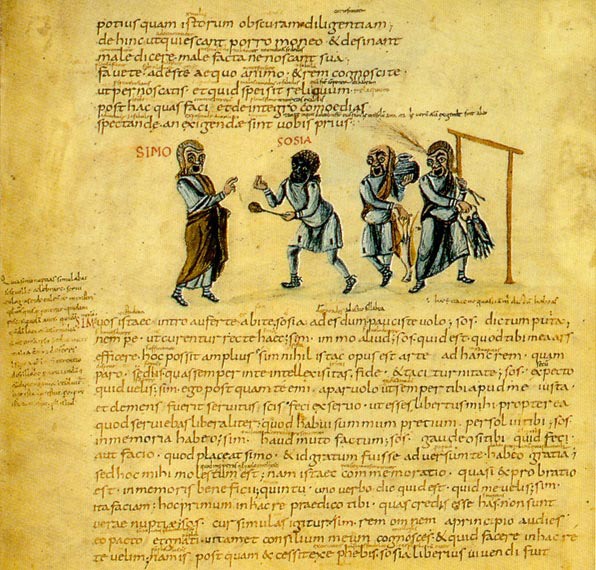 Terence’s play Eunuchus (The Eunuch) revolves around familial relations and features a foreign, comedic slave, named Parmeno. The play features characters who reflect a broad range of citizens and others of the Roman empire and beyond, including an Ethiopian slave purchased as a gift for a foreign courtesan by one of her suitors. These characters challenge or poke fun at stereotypes familiar to a typical Roman. Using comedy as a guise, Terence critiques Roman treatment of foreigners and subtly challenges Imperial policy.

Terence used his position as a native African in Rome (and later Greece, where he died in 159 BCE), to present, in a simple yet elegant style, balanced yet popular and palatable renditions of plays that featured people like him. The fact that Eunuchus was ‘performed twice a day for weeks on end’ in the Roman playhouse affirms the popularity of his works, which in turn increased the influence of his works.