‘Before Beckett, drama was synonymous with action: a plot in which nothing happens was inconceivable. Beckett is the first dramatist to focus exclusively on the act of waiting and to make this into his dominant metaphor for existence.’ (Bradby, 2001, 25)

Samuel Beckett’s Waiting for Godot changed the rules of twentieth century theatre. Written in French as En attendant Godot, the play premiered at a small left bank theatre in Paris, the Théâtre de Babylone, on 5 January 1953, directed by Roger Blin. Although it is reported that many audience members walked out during that first run, the play was praised by influential French  writers such as the novelist Alain Robbe-Grillet, and it provoked much debate in newspapers not only in France, but elsewhere in Europe, the United Kingdom, Ireland and the United States. The play was translated into English by Beckett and premiered in London at the Arts Theatre, directed by Peter Hall on 3 August 1955, and in Dublin, directed by Alan Simpson on 28 October the same year.  This series of modules will explore why Godot made such an impact in the middle of the twentieth century, and why it remains a challenge and an inspiration to audiences and theatre makers today.

Why study Godot today, if it was written over sixty years ago? Is it still relevant?

Waiting for Godot has been performed in many languages and in many geopolitical contexts such as in the San Quentin penitentiary (dir. by Herbert Blau in 1957), in apartheid South Africa (dir. by Benjy Francis at the Market Theatre, Johannesburg in 1976), a bilingual Hebrew-Arabic production in Haifa (dir. by Ilan Ronen in 1984), during the Siege of Sarajevo (dir. by Susan Sontag in 1993), and in New Orleans in the wake of Hurricane Katrina (dir. by Paul Chan, performed outside in the Lower Ninth Ward and Gentilly in 2007). The play’s political relevance and aesthetic ingenuity have made Godot one of the most famous and frequently staged plays of the twentieth century. It is no surprise that when the National Theatre in London asked playwrights, directors, actors, and journalists to rank the ten plays of the twentieth century that they considered the most ‘significant’, Waiting for Godot came in at number one. Yet, at first glance, this notoriously ambiguous and knotty play can seem off-putting due to the many difficult questions it sets up and leaves unanswered. This can lead us to ask why we should read Godot in the first place. Iseult Gillespie helps us to answer this question in the following short video ‘Why should you read Waiting for Godot?’.

When considering the relevance of Waiting for Godot for today’s audiences, it is worth recalling David Smith’s comments in The Observer from 8 March 2009:

Waiting for Godot seems to have a unique resonance during times of social and political crisis. As a modernist existential meditation it can at first appear bleak: “They give birth astride of a grave,” says Pozzo. “The light gleams an instant, then it’s night once more.” But it is also funny and poetic, and reveals humanity’s talents for stoicism, companionship and keeping going.

Now it resonates again. Another towering human structure, capitalism, is trembling at the foundations. Where there was certainty, there is now doubt and angst. Consumerism is on the retreat, and the acquisition of material objects is a dead end. It is a moment for introspection and stripping down to the bare essentials. There is no drama more stripped down and essential than Godot, whose mysteries Beckett refused to elucidate beyond “the laughter and the tears”.

Read the opening of Godot aloud, or workshop it. Discuss the relationship between Estragon and Vladimir. Where are they? When is the play set?

Look again at David Smith’s comments from 2009 about the contemporary relevance of Godot. What do you think is so relevant about Godot for today’s audiences in 2019? How would you stage Godot now?

How did Godot Come About?

Beckett eventually settled in Paris in 1937 and stayed there for the rest of his life. Though he had written some poems in French before the war, it was on his return to Paris after the Second World War that he started writing almost exclusively in French for some years. This period marked his so called ‘frenzy of writing’ (Knowslon, 1996, 358), during which time he wrote: the four Nouvelles (La Fin, L’expulsé, Premier amour andLe Calmant) and Mercier et Camier in 1946; Eleutheria and Molloy in 1947; Malone meurt from 1947 to 1948; En attendant Godot from late 1948 to early 1949; l’Innomable from 1949 to 1950; and Textes pour rien in 1951. In this prolific period, Beckett also wrote poems, critical essays, and translations. Godot, therefore, emerged during a period that was marked by Beckett’s creative flow and growing reputation.

Typically, Beckett viewed this productive period sceptically and said that he began writing Godot ‘as a relaxation from the awful prose [he] was writing at that time’ and to escape from ‘the wildness and rulelessness of the novels’ (Beckett in Cronin, 1997, 390). Beckett also said that he ‘needed a habitable place’ and claimed that he ‘found it on the stage.’ Perhaps as a result of the newness of writing for a different medium, the play came to Beckett quickly and needed few revisions. It was written between 9 October 1948 and 29 January 1949. As Ruby Cohn states:

Beckett did not set out to punctuate his fiction with a play. The holograph of his play shows much less revision than do manuscripts of his novels. In a cheap graph paper notebook Beckett’s execrable handwriting runs across the recto pages, then doubles back to the book’s beginning to continue on the verso pages. Only occasional crossouts and a relatively small quantity of doodles connote impediments to the creative flow. The general impression is of almost continuous writing, and indeed the play, begun on October 9, 1948, was completed on January 29, 1949. At no point in the manuscript is there a scenic breakdown, as in the aborted Human Wishes; nor do we find a cast of characters, as in Eleutheria. The improvisatory quality of the play seems to have emanated from Beckett’s own quasi-improvisatory composition – at least initially. (Cohn, 2001, 176-7)

On the night of 5 January 1953, at the intimate Théâtre de Babylone on the Boulevard Raspail in Paris, the premiere of En Attendant Godot took place. After creating a stir and excitement with extracts from the play being broadcast on radio the previous February and with Beckett already having a reputation as a ‘difficult’ novelist, no less than thirty reviewers appeared at the dress rehearsal on the 4 January 1953.

Despite initial difficulties in casting, finding a theatre, and objections from the Lord Chamberlain, the English version of Godot premiered in London at the Arts Theatre on 3 August 1955. It was directed by the then 24 year old Peter Hall. This production infamously received catcalls, walkouts, and negative early reviews from the press. This all led to a discussion about the production closing, but positive Sunday reviews by Harold Hobson and Kenneth Tynan (see below) secured its month’s residency at the Arts Theatre, transfer to the Criterion Theatre, and national tour. Godot  was not only Beckett’s breakthrough work, but it also continued to inspire and fascinate directors such as Peter Hall, who would return to Godot several times during his career. For a Staging Beckett blog on Hall’s work on this play, click here. 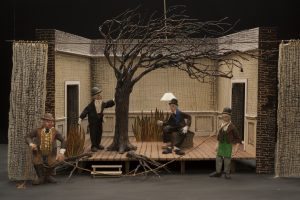 Model box for Godot by Peter Snow, the designer of Hall’s 1955 Waiting for Godot. The model box was donated to the Beckett Collection by the late Katharine Worth, a renowned scholar of Beckett and of European theatre, in 2013. It can be seen at the University of Reading’s Special Collections archive located at the London Road Campus.

To the next Module