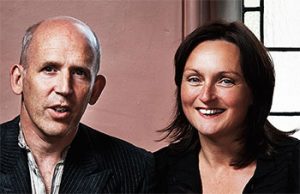 Gare St Lazare Ireland is an Irish theatre company that specialises in the work of Samuel Beckett.

This interview took place while the company were touring their production of Waiting for Godot in 2013. They had just played to sold out houses in Dublin and took the production to Boston after the run at the Lyric Theatre, Belfast.

Gare St Lazare built its reputation on presenting Beckett’s prose works in compelling and accessible solo performances that tour in Ireland and around the world. They have toured Ireland fourteen times since 1998 and have toured to over 80 cities in 25 other countries. Company core members are Judy Hegarty Lovett (director), Conor Lovett (actor) and Maura O’Keeffe (Producer) and collaborating artists have included Walter Asmus, Olwen Fouere, Will Eno, Ferdia Murphy, Caoimhin O’Raghallaigh, Lee DeLong, Christine Jones, Paul Clark, Melanie Pappenheim, Gary Lydon and Michael Harding. In 2006 for the Beckett centenary the company co-produced all of Beckett’s radio plays for broadcast on RTE Radio with some of Ireland’s most distinguished actors.

In a 2013 co-production Gare St Lazare/Dublin Theatre Festival, Judy Hegarty Lovett directed the first major Irish production of Waiting For Godot since 1988. It ran at The Gaiety Theatre and toured to Belfast, Boston and Shanghai. This year it will tour to New York. Also in 2013 for Brighton Festival, the company created a new work, Here All Night, inspired by and featuring texts and music by Samuel Beckett as well as original compositions by Paul Clark and improvisational music by Caoimhin O’Raghallaigh. It also features singer Melanie Pappenheim and actor Conor Lovett.