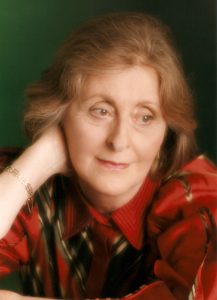 The actor and scholar Rosemary Pountney was interviewed in Oxford by David Tucker on 30 August 2015 as part of the Staging Beckett project.

Rosemary Pountney’s essay can also be found in the Research section of this website.

Rosemary Pountney began her career in the theatre, later taking a degree in English at the University of Oxford, followed by a doctorate on Beckett’s later drama (subsequently published as Theatre of Shadows: Samuel Beckett’s Drama, 1956-1976; From All That Fall to Footfalls with commentaries on the latest plays (Gerard’s Cross: Colin Smythe, 1988). She began her academic career at University College Dublin, followed by a Senior Lectureship and Research Fellowship in Drama at the University of Winchester (1981-96) which she held in tandem with a Lectureship in English at Jesus College, Oxford (1984-2002).

She has written numerous articles on Beckett (published in journals such as Modern Drama, Samuel Beckett Today/Aujourd’Hui, The Review of Contemporary Fiction, Journal Of Beckett Studies) and has reviewed widely, in particular for The Review of English Studies. She was a theatre critic for the Oxford Times throughout the 1970s.

While working on her Beckett thesis she began acting again and performed Not Iin 1976 at Oxford Playhouse and the Irish Premieres of Not Iand Footfallsat the Dublin Theatre Festival in 1978, followed by Footfalls at Oxford Playhouse in 1980, also performed at theatres in Dublin and the USA (Columbus and Youngstown, Ohio) in 1981.

In the 1990s she performed the Czech and Hungarian premieres of Footfalls and Rockaby in Prague and Szeged respectively and toured with Rockaby to the Schauspielhaus Dusseldorf, the Wallgraben Theatre Freiburg and Teater Neumarkt Zurich, as well as theatres in England and France. She also toured university theatres in Australia, New Zealand, Hawaii and Canada in 1990, performing in and lecturing on Beckett’s drama. A further tour to New Zealand for the British Council in 1997 took her to nearly every university in the country. In 1999 she lectured on Modern Drama for the British Council at King Abdul Aziz University, Jeddah (Saudi Arabia).

Rosemary Pountney knew Beckett, who helped her rehearse her role in Footfalls in1980. In 2012, she performed three of  his one woman plays at the Norwegian National Theatre and the Samuel Beckett Theatre in Dublin. She also gave readings of poetry and prose. She was a member of Equity and an Honorary Fellow of St. Anne’s College, Oxford.