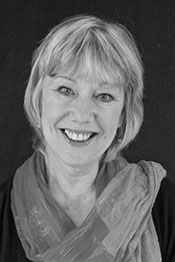 ‘A Practitioners’s Perspective on Performing Beckett’s Not I’, a public talk chaired by Graham Saunders, Staging Beckett at the Margins Conference, Chester University, 11 September, 2014.

Tricia Kelly was integral in arguably two of the most important British theatre companies to emerge after 1968, The Wrestling School and Joint Stock, then latterly Out of Joint. She is the subject of Howard Barker’s essay in Arguments for a Theatre, on her performance in Victory, in the essay ‘Two Bradshaws’. She has appeared in some of Caryl Churchill’s most well-known work – Fen, Mouthful of Birds. She has not only been involved though in the work of older dramatists, she is still working very much with contemporary British writers including Chloe Moss, Rory Mullarkey, and Nina Raine the writer and director. She has also appeared in Out of Joint’s revival of Some Explicit Polaroids. She also toured to America, and was recently in the National Theatre’s fantastic revival of Arnold Wesker’s The Kitchen, as well as David Edgar’s revival of The Adventures of Nicholas Nickleby. She has also done a great deal of work for television and film, including the final series of In Sickness and in Health.