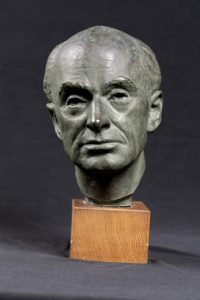 This bust shows the mature Percy Ure, University College Reading’s first Professor of Classics (from 1911), as he appeared in the 1940s. Percy Ure founded the Museum of Greek Archaeology (now Ure Museum) with his wife, Annie Ure, who became its first curator. Their creation of a museum, in 1922, followed their work together on archaeological excavations at Rhitsona in Boeotia, Greece. Jannis Athene presented this bust at the 13th annual exhibition of the Reading Guild of Artists (RGA) in 1943. It was a treasured belonging of Percy’s widow, Annie, from the time of his death, in 1950. It then passed onto her descendants. Percy and Annie’s granddaughter, Jenny, donated it to the Ure Museum in May 2019.

Having received correspondence from R.A Barker regarding the bust, the Ures thought he was associated with its creation. He was in fact the University’s official photographer. A search for the sculptor of this work, whose signature on the back of the bust is hard to discern, revealed that the name was Jannis Athene. Indeed a “J. Athene” applied for membership of the Reading Guild of Artists in April 1943 and was accepted into the Guild on the twenty-second of that month. The artist’s name is given as “Athena Jams” in local reviews of the exhibition at which this bust was initially shown. Greek names are often transliterated in a variety of ways, yet more questions have arisen: Was the sculptor male or female? Is Athene a first name or last name? Could it be a suggestion that they were from Athens? Or did they use a pseudonym to conceal their true identity?