(1st century BC or later) 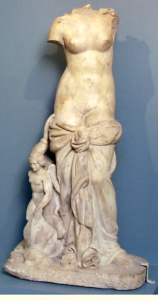 This statue of Aphrodite, goddess of love, was dedicated to the goddess near her temple at Cyrene (Libya). This statue, on loan from the British Museum since 2005, emerged from their excavations in Cyrene. Aphrodite had been worshipped at Cyrene by Greeks since they founded the city in 631 BC; the city was later taken over by the Romans in 96 BC. The goddess is shown almost naked, as her himation (robe) has slipped off her shoulders and gathered around her legs. Eros, god of love, Aphrodite’s son, rides a dolphin near her legs. This imagery refers to Aphrodite’s birth from the sea and her role as goddess of fertility. Although this Aphrodite has lost her head, Greek and Latin scholars who wrote about the famous statue at Knidos on which it is based, say Aphrodite’s facial expression and gesture show ‘false modesty’. Aphrodite has power over sexuality, love and fertility yet her personality is shy but confident.